The bubble is about to burst! In the next two days, we all will know if Sourav Ganguly has the support and confidence of Rahul Dravid... 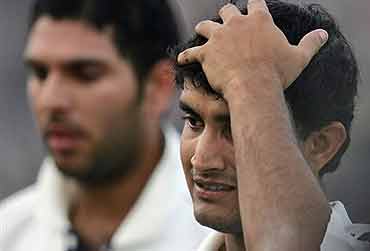 The bubble is about to burst! In the next two days, we all will know if Sourav Ganguly has the support and confidence of Rahul Dravid when India announce their playing line-up for the first Test against Pakistan.

As a former captain, I know when squads are picked for any tour, a tentative playing eleven is chosen first and then we select the backup players, of course keeping in view the strength of the opponent and the conditions we are likely to encounter.

According to that theory, Ganguly's absence from the starting line-up will confirm the fact that outside forces pressurised Dravid to carry the former captain while his inclusion will mean that the Indian captain has the faith and belief in the 'Prince of Kolkata'.

But faith and confidence over whom? Yuvraj Singh? Well, that's hard to believe simply because Yuvraj is the man in form, scored a century at Lahore a couple of years ago and is a multi-talented young prospect.

I know both Yuvraj and Ganguly don't like to face genuine fast bowling and have exposed their weaknesses especially against short-pitched bowling. But the answer to the question of who is better between the two, lies only with Dravid because when he would have sat down with the selectors to pick the first choice 11 for the tour, he would have shared his mind and I don't see that mind changing in two weeks.

If Ganguly is not picked for the first Test, I would certainly like to ask the selectors why they included the former captain and made the final selection difficult for Dravid. This will be an example of poor coordination between the selectors and the captain. I have always believed that the selectors, captain, Board chairman and coach are four legs of a chair that can only stand if all are in place, properly balanced and well coordinated.

Except for the tie between Ganguly and Yuvraj, I see the Indian team selection for the first Test as simple and easy as it is for Pakistan. Keeping in view the traditional Lahore pitch that always assists the seamers earlier on, both the teams should go with three seamers and a wrist spinner. The only difference will be that Pakistan will play Shahid Afridi at No. 6 while India will have to choose between Yuvraj and Ganguly.

If we compare the two teams, I think India looks more formidable on paper than Pakistan. In Virender Sehwag, India has an explosive opening batsman while Gautam Gambhir has a solid defense and likes to stay on the crease. The Indian middle-order is probably the strongest in the world. Anil Kumble is their most successful bowler while Irfan Pathan, Zaheer Khan Ajit Agarkar are not express but bowl within their limitations.

In contrast, Pakistan has a problem on top of the order and I would like to see Imran Farhat open the innings with Salman Butt. The reason being simple: Imran scored a century against India in the tour game and must be feeling more confident and positive than Shoaib Malik who managed three half century partnerships with Butt but always perished while falling on the ball.

Younis Khan had a poor series against England by his standards and Mohammad Yousuf has recently failed to convert good starts into big scores, thus leaving only Inzamam-ul Haq capable of holding the innings together. Danish Kaneria is learning fast but is still not in the same category of Kumble or Shane Warne. Barring a rejuvenated Shoaib Akhtar, Mohammad Sami and Rana Naved-ul Hasan did not look threatening in the last series against England.

When we talk of Shoaib, once again there will be question marks on his fitness. He ended up taking 17 wickets against England and bowled second-most overs after Danish, but only the statisticians would know in how many spells. He bowled short bursts of four or five overs and I am sure the Indians are wary of that. Also, without belittling Shoaib's magnificent performance against England, the Indian batsmen are in a different category and would require a lot of patience and perseverance from Shoaib.

Nevertheless, if India look a more experienced and balanced team on paper, the could-be defining factor of team unity, understanding and team spirit is certainly on Pakistan's side.

The three-dayer provided excellent workouts for the Indian batsmen. All of them made full use of the only practice match of the tour. And if they carry that form into the Test series, I smell trouble for Pakistan. The Indians did it the last time when they batted us out of the Multan Test and returned home 2-1 winners.

The first Test of any series is crucial, particularly if it is a three-Test rubber. I would like to see both the teams trying to make things happen instead of waiting for things to happen. A team with a more aggressive approach, innovative ideas and grabbing more opportunities will walk home with their heads high.

But winning and losing aside, let us all hope that the Lahore Test provides the trademark thrills and excitements. Best of luck to both the teams!