'Some Boards Tried To Shield Match-Fixers'

On the eve of passing the baton to Ehsan Mani, the ICC chief talks of match-fixing and other issues confronting the world body 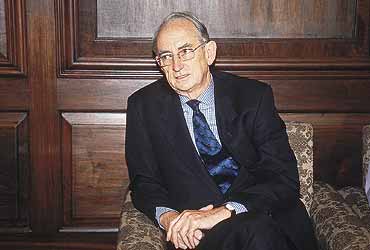 The International Cricket Council's outgoing president Malcolm Gray has hinted that some cricket boards tried to protect their national heroes in the match-fixing scandal as a result of which not many culprits were caught.

In an interview to The Melbourne Age, Gray said that though the ICC had been successful in suppressing match-fixing, it had been frustrating not to catch more culprits.

"One of the disappointments is probably that we didn't get more scalps... but it's probably understandable because we and the Anti-Corruption Unit don't have any legislative power.

We cannot march into somebody's house and carry out a search or we cannot arrest people, so we can only do it by investigation and by persuasion," Gray, who relinquishes his office tomorrow after a three-year term, said.

"The other reason is that there is a tendency to want to protect the sporting hero, and that's the fans, the public and I think some of the authorities tend to as well," he said.

Gray, who will hand over the reins to Pakistan's Ehsan Mani, said the crackdown on match-fixing was one of the highlights of his tenure but felt it was now time to "draw a line in the sand" and move on from the matter as it would not be worth trying to go back and find more culprits.

Talking about the growing divide in the ICC along racial lines, Gray said part of the problem lay in deep-rooted beliefs stemming from historical conflicts.

"It is human nature for people to flock together and grow a colour mentality... One thing I've learned in this job is just how racist people are. I didn't realise everybody was as racist as they are," he said.

Gray, however, felt the threat of a split was not as big as it is made out to be and hoped that all cricket playing countries would realise that it was in their best interest not to aggravate the divide.

"It's constantly brought up that there may be a split. I believe the real threat of it is not as high as people think ... Ultimately, common sense will prevail that if there is a split, they're just going to ruin the sport, which ultimately will ruin their own patch, their own power, their own finances."

Gray also criticised the British Government of "hiding behind sports administrators" on the issue of playing in Zimbabwe.

Pointing out that it was essentially a political decision that the Government should have taken, he said it was unfair on the Government's part to put pressure on the England and Wales Cricket Board to decide on "moral grounds".

"For every time in any sport when politics is involved, not politics of the sport but national politics, it's up to the Governments to be decisive about it," Gray said.

"I then believe that sporting bodies would then fall in line with the government. But politicians are clever and hide behind the sports administrators and that's what the British Government did."

Gray, a former chief of the Australian Cricket Board, also said that cricket probably was historically ill-equipped to deal with modern-day challenges, particularly the handling of large amounts of money that the sport can generate.

"One of the big dangers for cricket is that the sport does not necessarily have the ability to handle big amounts of money and I would say that of the Australian Cricket Board," he said.

"I am more convinced than ever that the most significant issue still confronting international cricket is its own governance.

"I think there is a slow realisation that the governance has got to get better. Some people resist that change and resist it passionately usually because it's taking some of their power or their ego satisfaction away. But I think we're slowly getting there," Gray said.