A listing of 12 top Hindi films on the theme of law and justice. 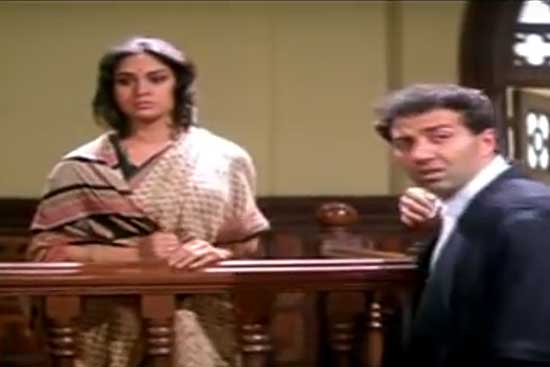 Long before the recent multilingual film Court won accolades at home and abroad, there were some impressive films on the theme of law and justice. Films that held a mirror to the Indian judicial system; where justice was said to be blind, and cold evidence was all that mattered in court. Here's a look at some such memorable Hindi films:

If there is one film on this theme that stands out, it is Aakrosh, Govind Nihalani's debut film and arguably his seminal work. There are several powerful performances in the film by Om Puri, Naseeruddin Shah and Amrish Puri. The film won the National Award for the Best Feature Film in Hindi. The opening scene of Aakrosh has the judge taking a walk by the sea and he is quick to avoid a wave that tries to wet his feet. His attention (and ours) is suddenly drawn to a young lawyer played by Naseeruddin Shah who plunges into the sea water, unafraid. An important clue to understanding the attitudes of the judge and the advocate towards the truth. In Court, the Judge, while on vacation, ends up slapping the wrong kid without bothering to find out the truth.

In Court,director Chaitanya Tamhane portrays the public prosecutor as a young , hardworking working mother of two, while the defence lawyer is fond of living the high life. Aakrosh, made at a time when the Angry Young Man ruled the box office, had the defence lawyer (Naseer) rage at the injustice meted out to the innocent tribal. Both the directors show us that it is the system that is inhumane.

This is Saeed Mirza's outstanding comic satire on the judicial system, where the guilty and the corrupt get away scot-free, where the helpless, innocent tenant, played by author Bhisham Sahni loses his money and sanity over the long drawn proceedings. Everyone is unscrupulous — the evil landlord Kapadia (a delightful performance by Amjad Khan), the prosecution lawyers, Naseeruddin Shah and Satish Shah, and the defence lawyer Rohini Hattangadi. Mid way through the film, in a shocking turn of events, one sees the two opposing lawyers, Naseer and Rohini, bragging about their legal exploits in bed.

The Marathi play, Shantata!Court Chalu aahe! written by Vijay Tendulkar in 1963, and first performed on stage in 1968, was made into a Hindi film called Khamosh!Adalat jaari hai! directed by Om Shivpuri, that starred his wife Sudha Shivpuri in the leading role. The film and the play are both considered major milestones in the history of Indian theatre and cinema. It is the story of a mock court being staged as part of a play in a village, and how things turn serious when members of the cast learn that the leading lady has had a child out of wedlock with one of the male cast members.

Interestingly, in real life, Shahid Azmi had defended the 2004 film Black Friday, directed by Anurag Kashyap on the Bombay blasts of 1993, in the case of stay filed against the film in the Bombay High Court. Anurag Kashyap co- produced Shahid. 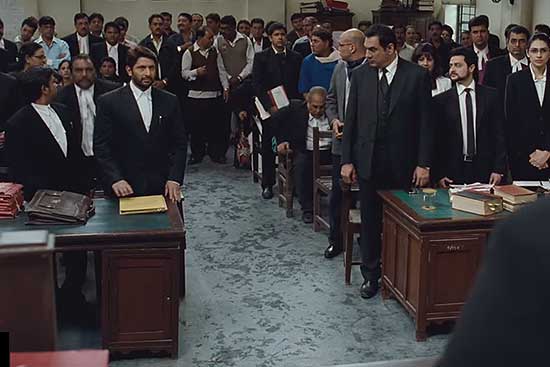 Winner of the National Award for Best feature film of 2013 in Hindi language, Jolly LLB tells the story of an out of work, mediocre advocate (Arshad Warsi). It is by chance that Jolly ends up filing a PIL, thereby getting a chance to redeem himself. The film alludes to the infamous BMW ( Sanjeev Nanda) case. Boman Irani plays the celebrated criminal lawyer. The real show stealer is Saurabh Shukla in the role of the judge, who restores our faith in the judiciary at the end. He won a National Award for this film.

On 9 September 2006, a sting operation by the news magazine Tehelka , aired on Star News, revealed that witnesses in the Jessica Lal murder case had been bribed and pressurised into retracting their initial statements. Public outcry following the Tehelka expose revived the interest of the police, which sought judicial review. The Hon'ble Delhi High Court, in its rulings of December 15 and December 20, 2006, sentenced prime accused Manu Sharma to life .

The film depicts how the case is all but forgotten until a headline in a newspaper “No one killed Jessica” shakes the conscience of a journalist (Rani Mukherjee), stirring her into action. Vidya Balan, plays Sabrina, Jessica's sister.

The Aarushi Talwar case captured the imagination of the entire country. There was wild speculation and conjecture. On November 25, 2013, a special CBI court held Rajesh and Nupur Talwar guilty for the two murders — that of their daughter Aarushi and their house-hold help Hemraj — sentencing them to life imprisonment. The couple challenged the decision in the Allahabad High Court. The case is pending.

The 2015 film Rahasya depicts the murder of an 18 year old girl, whose father (played by Ashish Vidyarthi) is suspected of having committed the crime. CBI chief (played by Kay Kay Menon) picks up the case and finds baffling and contradictory evidences that makes it difficult to pin down any single culprit.

The Talwars had objected to the film and sought a stay on its release. The film went on to be released on January 30, 2015 to positive reviews.

K M Nanavati vs. State of Maharashtra was a famous Indian court case in which Kawas Manekshaw Nanavati, a Naval Commander, was tried for the murder of Prem Ahuja, his British wife Sylvia's paramour. Nanavati was initially declared not guilty by a jury. The verdict was dismissed by the Bombay High Court, which sentenced Nanavati to life imprisonment. Hon'ble Supreme Court of India upheld the conviction. The Nanavati case received tremendous media coverage, and inspired several books and movies.

Yeh Raaste Hain Pyar Ke, a 1963 suspense thriller, directed by R K Nayyar with Sunil Dutt, Leela Naidu, and Rehman, was the first Bollywood film that was loosely based on the Nanavati case. Leela Naidu, who plays the stunning wife of Sunil Dutt, a commercial pilot, has a brief affair with family friend Rehman.

Achanak, a 1973 film that was written and directed by Gulzar and starred Vinod Khanna as an upright army officer, was also inspired by the same case.

This taut court room drama directed by B R Chopra, and starring Ashok Kumar and Rajendra Kumar in lead roles, was the first ever song less talkie in Hindi. The film won the National Award for Best Feature Film in Hindi. The film makes a case against capital punishment. 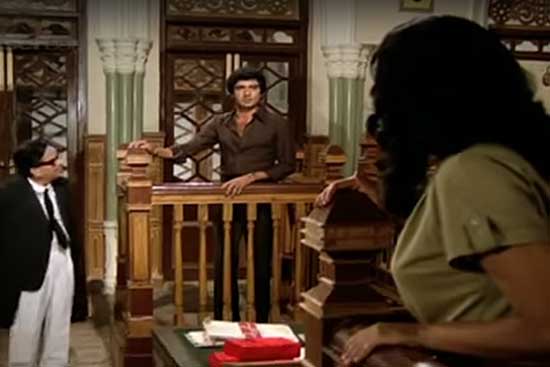 B R Chopra's film on anti- rape laws as they existed in 1980 was a box office hit and garnered several awards and nominations. However, the film came in for a fair deal of criticism for a rape sequence starring the teenaged Padmini Kolhapure, which many thought was exploitative. The film made a star of Raj Babbar who plays the rapist. In court, the defence lawyer proves that the act was not rape but consensual sex. The film debates the rape law which was , until recently, heavily biased against the victim and as per which, the onus was on the victim to prove the rape . The law has evolved considerably since.

Directed by Basu Chatterjee, the film is a remake of the Golden Bear winning, American motion picture 12 Angry Men (1957). It is a gripping tale of the trial of a teenaged slum boy who has been accused of killing his father, by a 12 man jury. K K Raina plays the dissenting juror. The film also featured M K Raina, Pankaj Kapoor and Annu Kapoor. The film talks about the prejudices which often colour the judgments of people , especially where death sentence is involved.

The film is remembered most for Meenakshi Sheshadri's career defining title role, and for Sunny Deol's remarkable performance as an out of work, frustrated lawyer, which won him the National Award for Best Supporting Actor in 1993.

The film tells the story of Damini, an ordinary housewife, who witnesses the gang rape of her young domestic help by the youth of the house during the Holi revelry, and her trials and tribulations as she stands by the girl.