Displaying an array of blistering strokes to notch up his fourth Test century, the 'Butcher of Najafgarh' helps the hosts give a befitting reply to New Zealand's imposing first innings total 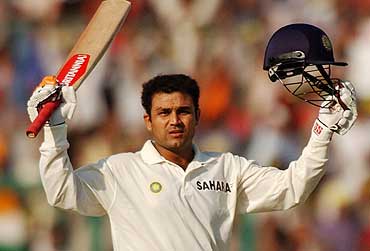 Virender Sehwag gave ample proof of his class with a scintillating century as India gave a befitting reply to New Zealand's imposing first innings total on the third day of the series-deciding second Test at Mohali today.

Sehwag was batting on 128 while stand-in captain Rahul Dravid was on nine to take India to 203 for one when stumps were drawn for the day.

The 24-year-old Sehwag set the PCA Stadium ablaze with an array of blistering strokes to not only notch up his fourth Test century but also help India give a good reply to New Zealand's first innings total of 630 for six declared.

India need 228 runs more to avoid the follow-on.  The Delhi opener, often criticised for throwing away his wicket after getting the starts, did justice to his potential, tearing the Kiwi bowling attack to shreds on a track which showed no signs of deteriorating.

Sehwag's runs came off 213 balls with the help of 16 fours and two sixes. Dravid was quite subdued considering his good form and he took 55 balls to score his nine runs as his first Test as skipper appeared heading for a draw.

After New Zealand declared their innings 40 minutes before the lunch break, Sehwag and Akash Chopra (60) showed no signs of being under any pressure, providing a solid platform with a 164-run opening partnership.

While Sehwag was the more aggressive of the two, Chopra too was prompt to punish the loose deliveries to the boundary in a rollicking partnership which gave the sizeable crowd plenty to cheer about after two full days of Kiwi onslaught.

Chopra, who made his Test debut in Ahmedabad with scores of 42 and 31, struck his first half century in Test cricket by taking a single off-spinner Daniel Vettori.

But he perished soon after achieving the milestone with Daryl Tuffey doing the damage with a ball that rose slightly from a good length spot. Chopra was taken by surprise by the extra bounce and only managed to edge the ball to Nathan Astle at first slip.

Sehwag continued in the same manner after Chopra's dismissal, executing some delightful shots, particularly  against Tuffey and off spinner Paul Wiseman. He took a single off Vettori to complete his century which came off 147 balls and soon crossed 1,000 runs in Test cricket becoming the 48th Indian to achieve the milestone.

Dravid, who joined the action after Chopra's dismissal, was a picture of concentration as he played watchfully and was quite content in giving the strike to the free-flowing Sehwag.

Earlier, Craig McMilllan became the fourth centurion for the Kiwis who added 94 quick runs to their overnight score of 536 for five before declaring their innings at 630 for six, leaving India with a challenging task of scoring 431 runs to avoid the follow on.

New Zealand's total was the fourth highest effort by an opposition team on Indian soil. The highest total by a rival has been 652 for seven declared made by England in Chennai in 1984-85.

McMillan took full advantage of the conditions to notch up his sixth Test century to help his team go beyond the 600-run mark against a tired and sting-less Indian bowling attack.

The Kiwis lost an early wicket in the morning with leg-spinner Anil Kumble managing to evict Robbie Hart who added just one run to his overnight tally of 10.

Daniel Vettori, who took centrestage after Hart's departure, made his intentions clear as he attacked the Indian bowlers from the word go while MicMillan was equally aggressive at the other end.

The lanky spinner, who played a crucial batting role for his team with a gritty 60 in the first Test in Ahmedabad, was not afraid to use his feet against the spinners and repeatedly swept Kumble to fetch runs.

He even tried the reverse sweep to good effect much to the frustration of the Indian bowlers.

McMillan, overnight 58 not out, unleashed a flurry of strokes on both sides of the wicket as the duo accelerated the pace of scoring.

McMillan lifted Sehwag for a mighty six to go up to 99 and then took a cheeky single to complete his sixth Test century, the fourth in the match after tons by Lou Vincent, Mark Richardson and Scott Styris.

New Zealand captain Stephen Fleming declared the innings immediately after McMillan completed his century and his team had batted for 198.3 overs, an effort which ensured they would not lose the match.