Hafiz helms JuD, which is the face of banned Lashkar-e-Taiba (LeT) terror outfit that carried out terror attacks in India, including Mumbai 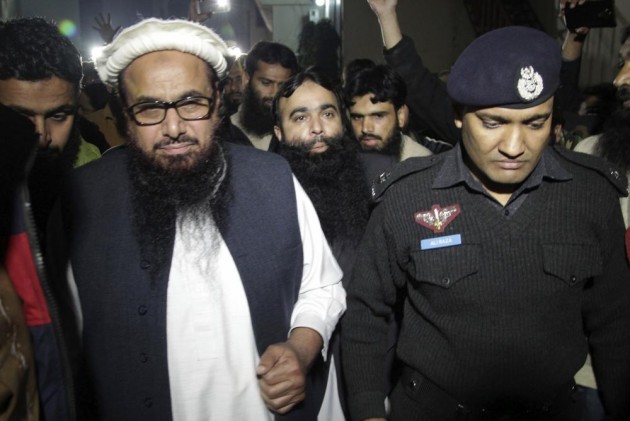 India’s security experts and former spooks are taking a cynical look at Pakistan’s clichéd move to detain Mumbai attack mastermind and Jammat-ud-Dawa chief Hafiz Saeed and four others under an Anti-Terrorism Act, a day after Trump administration threatened to put Pakistan in the immigration ban list of countries.

Vikram Sood, the former Research and Analysis Wing chief, said: I am cynical about the whole thing because Pakstanis are very smart at this kinds of things”.

“They are making up pretence and after a few days he will be let off. It is unlikely that Pakistan will pursue this to anything more. And after discreet interval..after the heat wears off, (he will be let off). There have been news reports saying that if the US bans Pakistanis there will be trouble in Afghanistan.. I wouldn’t get too excited about this,” said Sood.

JuD is the face of banned Lashkar-e-Taiba (LeT) terror outfit that carried out terror attacks in India, including the Mumbai terror strike of November 26, 2008 masterminded by Saeed. In 2012, the US announced a bounty of $10 million on Hafiz Saeed for his role in the attack that killed six American citizens among others.

The Times of India quoted an anonymous Pakistan defence ministry official as saying: “Trump is taking hard decisions against Muslim countries, there is open talk of actions against Pakistan also. So yes, this was a consideration,“ he said. JuD member Nadeem, too, said, “This government has buckled under pressure.“

The Pakistan has described the action as a measure to adhere to the UN sanction.

Saeed was in Lahore when police descended there to detain him based on an order issued by Punjab Province's Interior Ministry.

“It is a technique that Pakistan employs. They house arrest and later the Pakistan courts release. The US is more interested in the Haqqani network that affects Afghanistan,” said security analyst and distinguished fellow at the Observer Research Foundation (ORF) Manoj Joshi.

Most of the time it is difficult to pin down the mastermind in a court.

“In terror attacks, it is very difficult to do the final link-up between conspiracy and the evidence,” said Joshi.

So can’t the US see through the clichéd reaction from Pakistan whenever the pressure builds up?

“You see through things that you want to see through. When it is not politically expedient, you don’t. Where did the 9/11 terrorists come from? Saudi Arabia, there has been no action against them,” said Sood.

Saeed was placed under house arrest just after the attack on Mumbai but was set free six month later in June 2009. India has been citing Pakistan’s lack of action Saeed as a proof of Islamabad’s double standards in cracking down on militants.

After Monday’s arrest, Saeed's residence has been declared sub-jail and national flags were hoisted at the JuD offices in Lahore, instead of party flags .

“House arrest is pretty mild for a man who planned the Mumbai terror attacks,” said Joshi.