Knowing how keenly I feel this lack in my life, a kind friend took me along to a carded launch for a Single Malt whisky. "How come, me?" I asked my pal. "She wasn't free," he said tersely, "she hates whisky."

Okay, so I do get invited to bushelfuls of book launches. I also get a few invites for art openings and film showings and a very few for theatre and music performances accompanied by ‘refreshments’ or ‘cocktails’. And every time I wake up the next morning and see on Page 3 that some embassy or wine marketeer had had a ‘gala dinner’ to promote such and such a firangi liquor or wine, I feel as if I’ve been at the wrong party the night before. I may not know a lot about wine, I tell myself, but I’ve read enough of my Jancis Robinson and that Parker guy to be able to pretend real good; and as for the harder liquors I have drunk enough to know my Glenmorangie from my ganjee or my Starka from my parka. So, why is that not me in that snapshot, standing there rubbing shoulders with his excellency the Spanish ambassador, discussing fine Riojas and jamon? 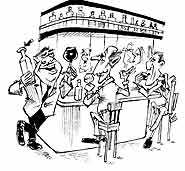 Knowing how keenly I feel this lack in my life, a kind friend took me along to a carded launch for a Single Malt whisky. "How come, me?" I asked my pal. "She wasn’t free," he said tersely, "she hates whisky."

And so I found myself at a usual-suspect 5-star, rubbing shoulders with English marketing geezers trying to speak in a Scots accent, surrounded by brown waiters looking very unhappy in standard-issue Scotland Tourism Board kilts, with my ears assailed by a wandering straggle of BSF bagpipers, queuing while trying to look like I wasn’t, all to taste the offerings from the distillery at Glen Nochtooguid. "Aye, we want you to start with the 12-year old and work your way up to our 28-year old very rare bottling," said the Marketing Geezer. "Nae wukking fay, laddie," muttered my pal and led me and another friend straight over the little moat to the island bar. "Arre bhaiya, jaraa woh 18-year old Nochtooguid dikhana." The barman put the bottle before us without arguing. We peeled off the wax, poured and tasted. "Nochtoo...," said pal, "...guid." We finished.

We decided to give each bottling a two-dram taste test; in a couple of hours, we made our way to the ‘legendary’ 28-year-old. We had trained the barkeep in the correct way of constructing a single malt drink: about a finger and a half of the whisky and a tiny drip of cold water to open up the taste. He was just getting the hang of it when a bunch of suits crowded around the bar. "Is that the 28-year wala?" said one, snatching the bottle from the bartender’s hand. "Yes, sir." The suit poured himself a huge drink, grabbed two fistfuls of ice and dunked it on top of the whisky and then topped the whole thing up with a soda. Then he took a swig, before turning to us and demanding: "Haw’rr yu finding this 28-year’s?"

We looked at each other, took a decent mouthful and replied with the unison of Highland Flingers. "Too good!"