'The board and selectors should ask themselves if they are ready and prepared to move on without him. Every captain has to go and the BCCI should start thinking about it.' 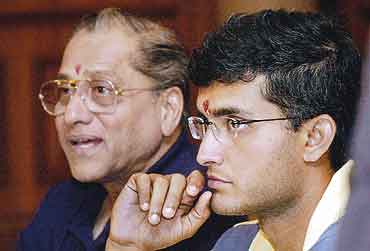 Former Pakistan captain Waqar Younis dampened the spirits of the embattled Saurav Ganguly saying the left-hander did not merit selection in the Indian team on the basis of current form.

"Saurav is a great batsman but I am afraid on present form he does not deserve to be selected," Waqar Younis said from Lahore.

"If I were a selector, I would definitely not select him," he added.

Ganguly is passing through one of his worst batting forms. He scored just 48 runs in the recently concluded three-Test series against Pakistan and had scores of 0, 9, 4 and 18 before he was slapped with a six-match ban by ICC match referee Chris Broad for India's slow over-rate against Pakistan in the fourth ODI at Ahmedabad.

"I think the Indian board and the selectors should decide how they feel about Saurav because they are the ones who chalk out (long term) strategies. They should ask themselves if they are ready and prepared to move on without Saurav," said Waqar, who retired after the 2003 World Cup after playing 87 Tests and 262 one-day internationals.

The former Pakistan speedster felt the Indian board should analyse the situation and begin thinking about Ganguly's replacement.

"Every captain has to go and the BCCI should start thinking about it. Rahul Dravid has done a good job in the past and he will improve if provided with an opportunity to regularly lead the team", Waqar said.

"But if he doesn't get the chance, how he will improve? The other thing that needs to be decided is how badly the Indian cricket team needs Saurav," Waqar, who took 373 wickets in Tests and 416 in one-dayers, said.

"That's why I am saying it's for the Indian board to decide how they evaluate the current situation," he added.

Waqar's assessment was in contrast to Wasim Akram's observation earlier this week when he advised the Indian selectors to be extremely careful in deciding about the future of the Indian captain.

Nevertheless, Waqar also had words of support and encouragement for Ganguly with whom he's been engaged in one of the finest cricket battles.

"It is going to be difficult for him to put back the recent failures but he is capable of bouncing back.

"I think he should go away from cricket because if he does not do that, the pressure will keep mounting on him. He should relax and give rest to his body and mind, and I believe the ICC ban would serve that purpose.

Waqar said Ganguly should play in domestic competitions before returning and spend more time at the nets after that.

"However, when he decides to return to cricket, he should spend most of his time at the nets. But it's very simple as far as I am concerned; he has to play in domestic competitions to prove his form and fitness before he can stake a claim for recall," he said.

Waqar denied speculations that he had been offered a coaching job in India. "I have not received any offer. I want to work with Pakistan and would love to step onto the field. But only on my terms and conditions. I would not accept assignments for one or two series.

"It has to be a long term contract because I also need time to talk and work with the bowlers. I would only accept a contract that provides me enough time to work because I have my reputation at stake and also my career in the media," Waqar, whose popularity graph in the country has not gone down despite retirement, said.