'He's now more into a fortifying role. You must respect that he has grown older. He can't always fulfil things that are expected of him.' 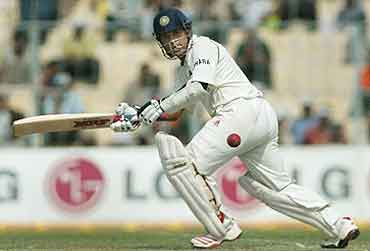 Sachin Tendulkar's style of batting got a vote of confidence from West Indies cricketing great Vivian Richards who said the Indian ace was batting quite maturely, expected of players of his age.

Tendulkar, who played attacking cricket over the years, has come in for criticism in recent times for a change in batting style which appeared to be defensive.

But Richards said having served Indian cricket for years, Tendulkar had already proved himself to be a legend and it would be very difficult for any other Indian player to match his on-field achievements.

"I read an article just before the Pakistan series where people asked questions about Sachin Tendulkar. I felt that if he leaves cricket right now, he will still remain a legend," Richards said.

"He is now more into a fortifying role and not flamboyant. But you must respect that he has grown older. He can't always fulfil the things that are expected of him." Richards, who is in the Capital to take part in a charity golf tournament to be played in Gurgaon, said the Indian batsman had carried the responsibility of the team for a long period with success.

"He carried India's mantle for a long period. He has done his job and has done it well. He may be looking to play the way he started his career, but that is not always possible.

"When you are 21, you are the best, with a perfect sight and good hand-eye co-ordination. At 26, you get a lot of wiser. Tendulkar is now a very matured player."

"I would like Sehwag to be a little more consistent. I like his style, the way he plays. He does not care about the bowler and I like that. But he needs to concentrate a little more. I am sure he will do that as he grows older."

On the comparison between Sehwag and Sir Don, he said "Judging from what I have seen of the Don, there is no comparison at all."

He also disagreed that explosive players like Sehwag and Shahid Afridi of Pakistan were copying his batting style.

"I don't think they are aping me. Viv Richards is Viv Richards. I won't compare myself with anyone else.

"When I was playing I took inspiration from others, but never aped anyone. Each player has his own style."

Richards also had a piece of advice for the beleaguered Saurav Ganguly, saying the Indian captain needed to believe in himself to come out of the rut.

"He needs that character, strength. He is in such a rut. But he must keep his head above the water and believe in himself.

Richards did not give much weight to India's poor form in the one-dayers, saying such things are part and parcel of the game.

He praised players like Irfan Pathan and Zaheer Khan and said the duo have it in them to serve the country for a long time.

"When you have left-armers, they can work things in your favour. I always found it a bit funny to face left-arm bowlers from the angle from which they deliver the ball.

"Both Pathan and Zaheer gave Australia a whole lot of trouble. If you keep them fit and maintain them, they can do a lot of good to your cause."

Turning to West Indies cricket, Richards said Shivnarine Chanderpaul was doing a good job as a captain, but declined to acknowledge that the return of some players including Brian Lara into the fold for the ongoing Test series against South Africa, following a dispute over a sponsorship deal, has done any good to the side.

"Chanderpaul did well in Guyana in the first Test. That's a huge bonus for West Indies cricket. But when they went to the second Test with several stars, they lost by a big margin.

"We would have loved to see Lara a little more successful as a captain. The saddest part is that when he scored runs, it did not reflect in the performance of the team."