The youngster's elegant 81 steers the Proteas to a respectable 261 before the bowlers skittle out the hosts cheaply. 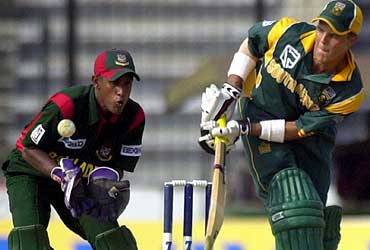 South Africa rode on Jaques Rudolph's maiden half century to fashion a comfortable 93-run victory over Bangladesh at the Bangabandhu Stadium today and set up a title clash with India in the final of the TVS Cup.

The young Rudolph struck an elegant 81 off 113 balls to steer South Africa to a respectable 261 for five before the bowlers stuck to their tasks to bundle out the hosts for 168 in 49 overs despite Alok Kapali's valiant 70-run knock.

Electing to bat, South African skipper Graeme Smith (67) and Rudolph provided the platform with a 101-run stand before Neil McKenzie and Shaun Pollock set the stadium blaze with some lusty hits which virtually took the game away from hapless Bangladesh who were knocked out of the competiton after today's defeat.

Former captain Pollock was given the new ball after two matches and he responded with another fine performance, claiming three wickets for 17 runs from his seven overs.

The tournament's last league match between India and South Africa tomorrow will now be a dress rehearsal for the final on Sunday.

The hosts, who have now gone 36 matches without a win, could never really recover from the early jolts inflicted by the experienced Pollock and Makhaya Ntini as they kept losing wickets at regular intervals to surrender rather tamely.

The two Bangladeshi openers managed to play out the first seven overs from the rival pacemen but Ntini broke the brief resistance by evicting Mehrab Hossain with wicket-keeper Mark Boucher latching on to a smart catch, the first of his five dismissals.

The departure of Hossain opened up the floodgates as none of the middle order batsmen could hang around for long in the face of a discplined attack by the visitors.

Pollock sent back Habibul Bashar (1) and Mohammad Ashraful (7) in quick succession to tighten the noose on the home team. Both Bashar and Ashraful fell leg before wicket.

Young paceman Allan Dawson, who was introduced into the attack in the 12th over, struck with his very first ball by removing Akram Khan to reduce Bangladesh to a precarious 29 for four.

Akram, a former Bangladesh captain, fished at an away going delivery and edged it Boucher who pulled off a brilliant catch.

Kapali and captain Khaled Mahmud tried to stem the slide by playing cautiously and kept the scoreboard moving with gentle pushes and nudges. The fifth wicket partnership was the most productive of the innings as Kapali and Mahmud put on 55 runs although they faced a few anxious moments.

Mahmud perished to a rash stroke as he slashed at an outgoing delivery and was consumed by Boucher behind the stumps, paceman Andrew Hall bringing an end to the defiant partnership.

Kapali continued the defiance for some more time before being the penultimate batsman to be dismissed in the 46th over. Kapali, who struck five boundaries in his 101-ball knock, was caught by Paul Adams to become the third victim of Hall.

Earlier, South Africa rode on a strokeful knock by Rudolph and some lusty hittings by Neil McKenzie (39 n.o) and Shaun Pollock (38 n.o) to guide their team to a good total, leaving the hosts to score over five runs an over to win.

Rudolph made the most of a dropped chance by Habibul Bashar at second slip off Baisya when he was yet to open his account to smash eight fours in his 113-ball knock.

Smith also came up with a useful contribution of 67 off 76 balls to steady the innings after the visitors had lost opener Herschelle Gibbs (0) with just five runs on the board.

Smith and Rudolph put up a fine partnership for the second wicket but the South Africans lost the momentum to some extent in the middle overs as they lost four wickets in quick succession.

After Smith's departure, Boeta Dippenaar (16), Rudolph and Boucher (12) returned to the dressing room as the Bangladesh bowlers did reasonably well to slow down the proceedings.

But McKenzie and Pollock launched a savage assault in the last three overs to accelerate the pace of scoring and wrest the intitiative from the hosts who were guilty of bowling too many loose delivering at the fag end.

Pollock was particularly severe on home captain Mahmud as he blasted him for 20 runs in the 48th over. The next over from Baisya yielded 15 runs as the two batsmen used the long handle to good effect.

'I Am A Better Bowler Now'