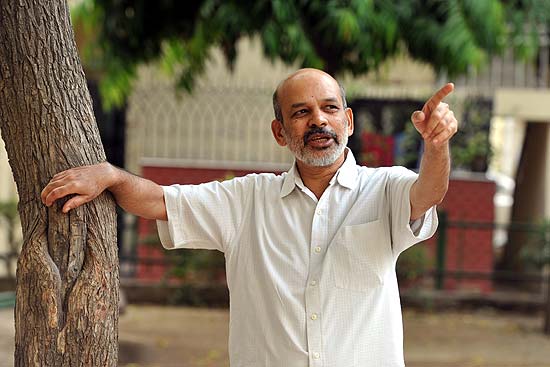 Originally from Myanmar, the ‘boat people’ Rohingyas have been recognized by human rights organizations across the world as one of the most heavily persecuted minorities due to the systemic violence and discrimination they have faced in their own country and in countries they have attempted to seek refuge in. India too has come to house thousands of Rohingyas, but the cause has not yet found a place in the public discourse. Ravi Hemadri, Director of the Development And Justice Initiative (DAJI) works with the Rohingyas. In an interview, he speaks to Geetika Mantri and Hansa Malhotra, on the issue. Excerpts:

Tell us about the Rohingyas in India.

Jammu has the highest concentration of Rohingyas in India – about 5,000. While they may have initially come to Jammu to eventually cross over to Pakistan, this does not happen anymore. They prefer Jammu due to better employment options, as sanitation workers in railways, industrial workers and rag/scrap pickers. Hyderabad, Rajasthan and Haryana also have significant numbers of Rohingyas.

How is DAJI assisting the Rohingyas in India?

We work in Haryana where about 150-odd Rohingya families reside, and also in Rajasthan. We advocate with government schools in Jammu, Rajasthan and Haryana to get them access to education. Our efforts are also driven towards making healthcare facilities accessible to them. The UN has a proper procedure for recognizing a person as a refugee. There are 4 stages of verification, cross-checking and interviews that carefully assess the claims of individuals to refugee status. DAJI has partnered with the UNHCR and we assist them with a part of the said procedure as well. Their major issues are regarding livelihood and unhygienic conditions of their settlements.

Why do you think Indian media has by and large ignored the Rohingyas issue?

It’s not just the Rohingyas. In fact, there are other set of refugees like the Chins, Sri Lankans, Afghans and Africans to name a few. Refugees have not really been an “issue” in India. There have been some scattered reports, some off and on debates and a few court cases on the refugee issue but that’s it.

Moreover, India has been quite generous to them. Apart from being open to receiving refugees, we have also offered protection and do not have a policy of deporting them. It is a legal principle, drawn from Article 21 which is the right to life for any “person”, not limiting it to “citizen”.

How is this issue relevant to India?

At least people should know about Rohingyas’ plight! Other than the sea crisis, graves have been found along the Malaysian-Thai border which has revealed that there is large scale human trafficking of these refugees. Due to the widespread reportage on that and international pressure, scrutiny is going to increase on Malaysia and Thailand belt. So when that route closes to traffickers, there is a good chance they would look to Bangladesh and India. India has always fallen in the transit route to the Gulf countries. Victims are brought to Mumbai and shipped from there to Dubai, Qatar and other Gulf countries. Unlike the Bangladeshi migrants’ issue which has been quite political in India, the Rohingyas issue fortunately isn’t. But it is important we take note of what is happening in Southeast Asia and pre-empt its impact without waiting for it to become politicized before we do something about it.

Even Aung San Suu Kyi is silent about this.

The current exodus about the issue started in 2012 after the riots which involved the Buddhists as well as the military. At that point of time Suu Kyi was silent. Although political pressure is steadily building on Suu Kyi to support granting of citizenship to Rohingyas, little has been done about it in Myanmar. Besides, with the elections upcoming in Myanmar in October, the silence might be attributed to avoid saying something controversial.

Do you think resettlement as a solution is enough?

Not at all. The situation has to improve in Myanmar itself, because if many have fled the country, as many as are still there. They need to be given citizenship, rights and their persecution needs to stop immediately. They are not even allowed to marry, they have to take permission to even move within the country. Besides, there have been talks of a law making it necessary for women to wait for at least 36 months before having another child. This could be misused to marginalize Rohingyas even further.

Could there be a political reason behind shunning the Rohingyas across various countries?

I don’t think there are vested interests at play. In general, an outsider will be seen as a threat to livelihood and security. One reason could be that they are backward according to our standards of what progress is. A lot of minorities in Myanmar are tribal communities and don’t bring with them any assets or skills and are extremely poor, which reduces incentive to accept them. There has been a conflict between the Myanmari military Junta and these peripheral tribal communities for years now. Xenophobia has always been an issue there too. When Myanmar became independent, a lot of them wanted autonomy. The Junta capitalized on the situation and came to power on the premise that only they could keep the state together as the sole protectors of unity. Campaigns against minorities have a history in Myanmar.

Could the Rohingyas’ plight make them vulnerable to radicalization?

I don’t think so. They might be perceived as a fertile ground, but the Rohingyas are backward and their version of Islam is liberal, not radical. Perhaps that is why they have captured the interest of the West -- a Muslim community not up in arms, unlike a few others in the world. In Jammu or any other areas we are working in, we have no evidence of radicalization.