"Narayan's legacy will be there for all of us. But with him gone, who will chronicle the further changes in Malgudi?" A fan's lament. 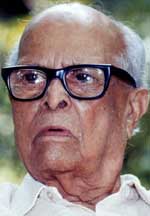 Today, the flags at Malgudi are flying at halfmast. Have been since yesterday. The talk of the town, as usual, is centered around the Boardless and the Bombay Anand Bhavan where people are poring over the Banner (printed by Truth Printing), and for some reason, Gaffur's taxi cannot be found -- he says he is not feeling well. Except for the Mempi Hills and the Sarayu which seem to remain as inscrutable as ever, the whole of Malgudi is in mourning today: forget about Sir Frederick Lawley, the true founder of Malgudi, R. K. Narayan, is no more.

"Died of cardio-respiratory failure in a private hospital on the 13th. morning at 3.05 A.M. He was 95", as the agency despatches crudely put it.

There have been, and no doubt there will be, many more dissertations in the future assessing Narayan's contribution to literature, in particular to what is termed now as IWE. This is not an obituary, nor a eulogy. This is an expression of a sense of personal loss. For I shall personally remain grateful for Malgudi. A place he created. A world by itself.

As the Sahitya Akademi Fellowship citation conferring its highest honour on him says, "The world of Malgudi is peopled with ordinary men and women, sometimes indulging in extraordinary yearnings, dreams and schemes and enduring tragi-comic or even grotesque and weird destinies". A place where I take (and will continue to take) refuge from time to time. A place I feel home at, and yet find interesting and stimulating.

For sure, Malgudi has changed over the years, but it has changed in step with my own age, remaining as familiar as ever. This is a place I love, now, and this is where I have always wanted to settle after I retire. One always needs a place one can call one's own -- the attic in the house, or a particular corner in the local library. But sometimes our needs are larger, and then we need a whole locality, a way of life, whole set of people we can relate to.

Nishchindipur, the village where Apu grew up in Bibhutubhushan's Pather Panchali was such a place for me. But, let me confess, I don't think I can retire to such a village anymore. I can visit such a place, yes, but I cannot live there -- I would need a Boardless, a newspaper, occasionally a taxi, and, a medical center where I can submit myself to Dr. Krishna'r probing stethoscope and questions, not always related to my current discomfort.

Malgudi, for me, has just the right amount of everything that I need. And for that I shall ever remain indebted to Narayan.

What will happen to Malgudi? Hard to say. The Mempi Hills and the Sarayu have seen their share of great people come and go -- the unknown cave painters, Shankaracharya, the founder of the Iswara temple, the Britishers like Sir Frederick Lawley, and then Gandhiji. But the life here has gone on in its own rhythm. I am sure it will go on just as well in the future. At least so long as the Sarayu flows by it.

Narayan's legacy will be there for all of us. But with him gone, who will chronicle the further changes in Malgudi?

I Dream I am Tate