The Indian coach reveals his ploy that challenged Sehwag to reclaim his batting style. 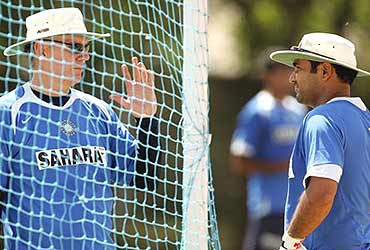 A motivational ploy of putting him in the middle order seems to have worked in stoking Virender Sehwag's appetite for runs, it was claimed by coach Greg Chappell in an interview.

"Viru was put in the middle order as a cover for Yuvraj Singh in case the latter didn't return in time as well as to motivate him. Something has worked," Chappell said after the dashing right-hander contributed 46 in India's series-winning cause against Sri Lanka in Visakhapatnam on February 17.

Sehwag, who has drawn much flak in the media over his poor form of late after having failed to score a single century in the last 59 ODIs, opened the innings on Saturday and batted with characteristic flourish to re-ignite the almost dying hopes on his form and attitude.

The Delhi dasher was initially projected as a middle order batsman for the World Cup in the media by Chappell but the Australian now claims it was all a part of his plan to challenge Sehwag to reclaim his batting style.

Chappell indicated in no uncertain terms that Sehwag would now bat in any of the first three batting slots in the World Cup. Sehwag has batted in 134 of his 167 one-day internationals as opener and seems set to resume the role.

As a reverse psychology, it also seems to have worked for Yuvraj who was struggling for fitness and form and made a handsome return to form with an innings of 95 in the last game against Sri Lanka.

"Yuvraj can be a critical difference during the World Cup. When he is in form, he is one of the best in the business. We need batsmen who can make the most of the middle overs. Yuvi can help us do well in that area," said Chappell.

Chappell also spoke his mind on Irfan Pathan whose form and fitness is shrouded in mystery.

Sent back from South Africa in the middle of a tour in December last, Pathan has only played one international and two first class matches in the first two months of the year and now appears an unknown and unproven prospect for the World Cup.

"Irfan is down on confidence, there is little doubt on it. And that's because he hasn't had much success recently. All he needs is an injection of wickets," asserted Chappell who still feels the Baroda player in form gives the side much needed balance in both batting and bowling.

"Irfan has a role which, when in form, can give the side a critical balance. Irfan in form is of immense value. It's not his batting but bowling which is in question. But all this would change when he is among wickets. But at the moment he needs to be fit and then chances would come his way", he said.

The issues of Sehwag, Yuvraj and Pathan have generated much heat in cricket circles in recent times but bigger scorn and ridicule has come the side's way because of injuries to key players.

"Frankly I am not concerned about injuries. There is always going to be a niggle but nothing is serious enough to get worried about," Chappell said.

Chappell claimed that couple of weeks in cricket can make critical difference to a team's fortunes and cited the examples of India and Australia to back his words.

"We look far better than we did in South Africa and a lot of issues seem to have been answered. We still have some days to the World Cup and further progress would be made. There are some domestic matches, practice ties and a couple of group games in the World Cup which would provide us answers.

"Australia too was a huge favourite till a few weeks ago but now it's changed. Injuries have played a part in it. So the way things have changed and shaped up, it would appear anyone can do well if they play well. Most of the teams are fairly well matched," he pointed out.

In Chappell's opinion, India has got as good a chance as anyone else in the biggest competition in the game.

Chappell admits fielding could be India's grey area and exhorts his batsmen and bowlers to make up for the deficiency in their respective areas in the World Cup.

"As an Australian, I have strong views on fielding. But I wouldn't ignore reality. You need to review and I am prepared to do it for better results.