It now remains to be seen for how much time the street violence in response to Azam Tariq's murder will last, before it traps the reactionaries in their own net. 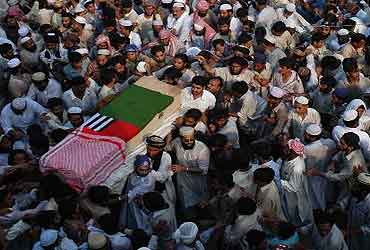 With crackdowns continuing in the Pakistani tribal belt, a plan to root out the jehadi network in Pakistan is on the cards. The recent killings of Shiites in Karachi and the high profile murder of Maulana Azam Tariq on October 6, 2003, are closely linked with likely developments in the near future.

The murder of Maulana Azam Tariq, Member of National Assembly and chief of the Millat-i-Islamia party [formerly the now defunct Sipah-e-Sahaba Pakistan (SSP)] and an ally of the country's ruling coalition, has pushed Pakistan towards deep turmoil. All the big cities of the country, especially the federal capital of Islamabad, fell into the hands of violent crowds that took to the streets on Tuesday, October 7, 2003.

Maulana Azam Tariq was killed when his car was ambushed by unidentified gunmen at the Golra Mor in the vicinity of the high security zone of the federal capital. Although the Millat-i-Islamia party has registered a First Information Report in which mostly Shiite religious leaders as well as a Director of the Iranian Cultural Centre was named, the hawkish elements in the party - the inner circle - are convinced that the murder conspiracy emanated from Pakistan's corridors of power.

Maulana Azam Tariq's widow was also heard saying at the funeral that, a few days ago, Interior Minister Syed Faisal Saleh Hayat (who was also the Maulana's political rival in the Jhang area) had threatened Maulana Tariq, after which Azam Tariq always travelled in disguise. His security escort had also been recently withdrawn by the Punjab Government, another example that is being quoted by sympathizers in the context of allegations that the ruling establishment was behind the murder.

Apart from various subjective opinions, a closer analysis of the incident suggests several aspects that are inconsistent with the premise of a sectarian killing. According to reports, the assailants fired as many as 92 bullets at the car and at least 30 bullets hit Maulana Tariq. Eyewitnesses stated that, as soon as the Maulana's car crossed a toll plaza, a Pajero jeep overtook his vehicle through the second lane and stopped. Three assailants came out of the Pajero and started spraying bullets at the car from two sides. They continued firing for about 20 seconds and escaped after confirming that Azam Tariq and his colleagues were dead. The staff at the toll plaza fled to save their own lives. One eyewitness mentioned that an assailant also fired three bullets at one of the staffers at the toll plaza, but he managed to escape.

Later, the Police recovered the Pajero used in the attack from Mughal Market, Sector I-8, Islamabad. Witnesses said that the terrorists had abandoned the vehicle along the road and had driven away towards Faizabad in a white Toyota Corolla car.

Contrary to earlier patterns of terrorist attacks, this was not a sudden hit-and-run operation in which killers generally fire a few bullets in a haphazard way and flee. Three persons firing 92 bullets would be expected to have stayed on the spot for some time, probably several minutes. This clearly indicates a high level of confidence among the assassins, and suggests the use of professional shooters.

In most past sectarian killings, the attacks have generally lasted a little over a minute or a minute and a half, with the killers staying in their vehicle and firing no more than 20 to 25 bullets, before they flee. In the present case, moreover, the killers travelled all through Islamabad, which is under extraordinarily high security these days, and left the car in the posh Sector I-8 area, where the private houses of top bureaucrats and businessmen are situated.

Another theory, however, is that Maulana Tariq became the victim of a revenge killing for an incident that took place in Karachi on October 3, 2003, in which seven Shia employees of the Space and Upper Atmospheric Research Commission (SUPARCO) were killed.

Whatever the case, the Maulana's killing has brought the activists of the banned SSP out of hiding, and they have taken to the streets in extreme anger. Even the dissident faction of the SSP, the Lashkar-e-Jhangvi (LeJ) group, surfaced and joined in the protests. Most of these people were trained in Afghan training camps during the Taliban period, and are wanted by the Pakistani Government.

Well-placed sources indicate that the reaction to Maulana Tariq's murder and the subsequent street violence may cause Shia-Sunni riots in parts of the country. If this happens, the government can be expected to conduct siege and search operations in areas such as Jhang, Chiniot, Sahiwal, Karachi, Hyderabad, Faisalabad and Sargodha, arresting persons who have any manner of linkages with the SSP.

Once such an operation commences, it is expected to take other sectarian and militant outfits into its ambit as well. US and other western intelligence agencies are convinced that, of the two Lashkar-e-Jhangvi factions, one - the Asif Ramzi group (whose command is now in the hands of Qari Asad) - is behind many terrorist incidents in which Western targets were involved, including the May 8, 2002, Sheraton bomb blast in which nine French workers were killed, the Daniel Pearl killing, and attacks on various churches, among others.

Though the LeJ and SSP are now separate organisations, US intelligence believes that there are strong surviving linkages between the two. At the same time, organizations such as the Jaish-e-Mohammed (JeM) and the SSP are also linked. Both Maulana Azam Tariq and JeM chief Maulana Masood Azhar together received their education at the Binori Town Seminary in Karachi. Several workers of both formations frequently change hats and have, time and again, crossed over from the SSP to the JeM, and back. Consequently, if the Pakistani establishment takes action against the SSP, groups such as the JeM would automatically attract similar action.

Understanding intelligence agency operations in Pakistan does not require any deep investigations. Such operations are conducted on set formulae, and intelligence bosses generally apply the same rules in all comparable operations. Way back in the mid-1990s, the then Nawaz Sharief Government had decided to break the network of ethnocentric parties in Karachi, which had brought extreme lawlessness and a gun culture to the metropolis. The task was assigned to the Intelligence Bureau's (IB) Deputy Director General, retired Wing Commander Tariq Lodhi. The IB arranged special sharp shooters from its Simli Dam Training Center, who conducted random killings in selected areas. In the following days, the city turned violent, giving the law enforcers a reason to conduct their search and seizure operations that fixed on workers of ethnocentric parties, eventually breaking their networks. It now remains to be seen for how much time the street violence in response to Azam Tariq's murder will last, before it traps the reactionaries in their own net.