These are the first four lines of the poem titled Bhoy Peyona (don’t be afraid). Loosely translated to English, it means, “Don't be afraid, I am not going to hurt you/Believe me, I can't win at wrestling with you/ I assure you I am too soft hearted, there's not an ounce of anger in me/ Chewing you up is out of the question for me.”

Then, when the addressee shows no sign of trust despite further pursuations and pleading, comes the threat in the last four lines.

“Still not convinced, eh? How about I tie your feet down?/ Don't make me mad or I'll sit tight on your head!/ Be warned… I have my wife, my nine sons along with me/All of us are going to bite you together if you insist on being foolish.”

This is perhaps one of the most popular poems in elocution competitions for children that are held in different parts of Bengal every year as part of cultural contests. As a child growing up in the late 1980s and the early 1990s, I had great fun practicing its rendition before participating in such contests. As a grown-up, though, I rediscovered the poem in the context of ‘power’ and its behaviour, the ‘carrot and stick policy’ for an example.

I am no exception. The writings of Sukumar Ray (1887-1923), early-twentieth century literary genius whose son, Satyajit, later became famous as a filmmaker, are usually introduced to one when she or he is a child. It can safely be said that there will be very few persons who have first read Ray as an adult. Children have fun, roll on the floor laughing while going through the nonsensical descriptions in Ray’s poems, stories and plays. In Calcutta’s flagship annual book fair, parents are coming out of children’s bookstores with Ray’s collected works or the poetry book, Abol Tabol, is still a common site.

Once grown up, Ray’s world might look closer to an Orwellian or Kafkaesque one.

In the poem Baburam Sapurey, Baburam, the snakecharmer, is requested to fetch a couple of harmless snakes so that they could be thrashed with a stick. The snakes had to be absolutely harmless. In Abak Jalpan, a play that children often stage at cultural events in their neighbourhood, a very thirsty man keeps asking one person after another where he can get some water to drink but everyone responds by telling a dozen irrelevant things except the answering what the man asked.

Take, for example, the poem Ekushe Ain, a coinage that has earned a proverbial stature to describe flawed laws.

It says, in Lord Shiva’s own land, the laws are catastrophic, as people are arrested for slipping, are produced before a qazi and punished with a fine of Rs 21. A subsequent stanza says that the people who write in rhyme are put in cages, forced to listen to multiplication tables and made to calculate 21 pages of grocery expenses.

When Ray was writing these pieces during the last leg of the second decade and the beginning of the third decade of the twentieth century, they were conceived as nonsense. Afterwards, these pieces were discovered as socio-political commentaries, sometimes described as ‘wicked satire’.

“To me, he is the one who introduced the absurd in Bengali literature. The world I met in Ray’s works returned when I read Albert Camus’ The Myth of the Sisyphus or Samuel Beckett’s Waiting for Godot,” said sexagenarian Bengali short story writer Tapankar Bhattacharya. “Remember, Ray predated Camus and Beckett.”

Bhattacharya had introduced his son, Samya, to Ray’s writings at a tender age. “When I used to read him up Ray’s rhymes, he enjoyed them from a different perspective and I from another,” Bhattacharya said.

Another coinage that has earned a proverbial usage is Khuror Kol, the title of a poem which can be described as the uncle’s contraptions. There was an accompanying illustration by Ray himself that helps a reader understand the invention better. The machine was fastened to the shoulder of a man and had food dangling in front. However much one may chase the food, it can never be reached. 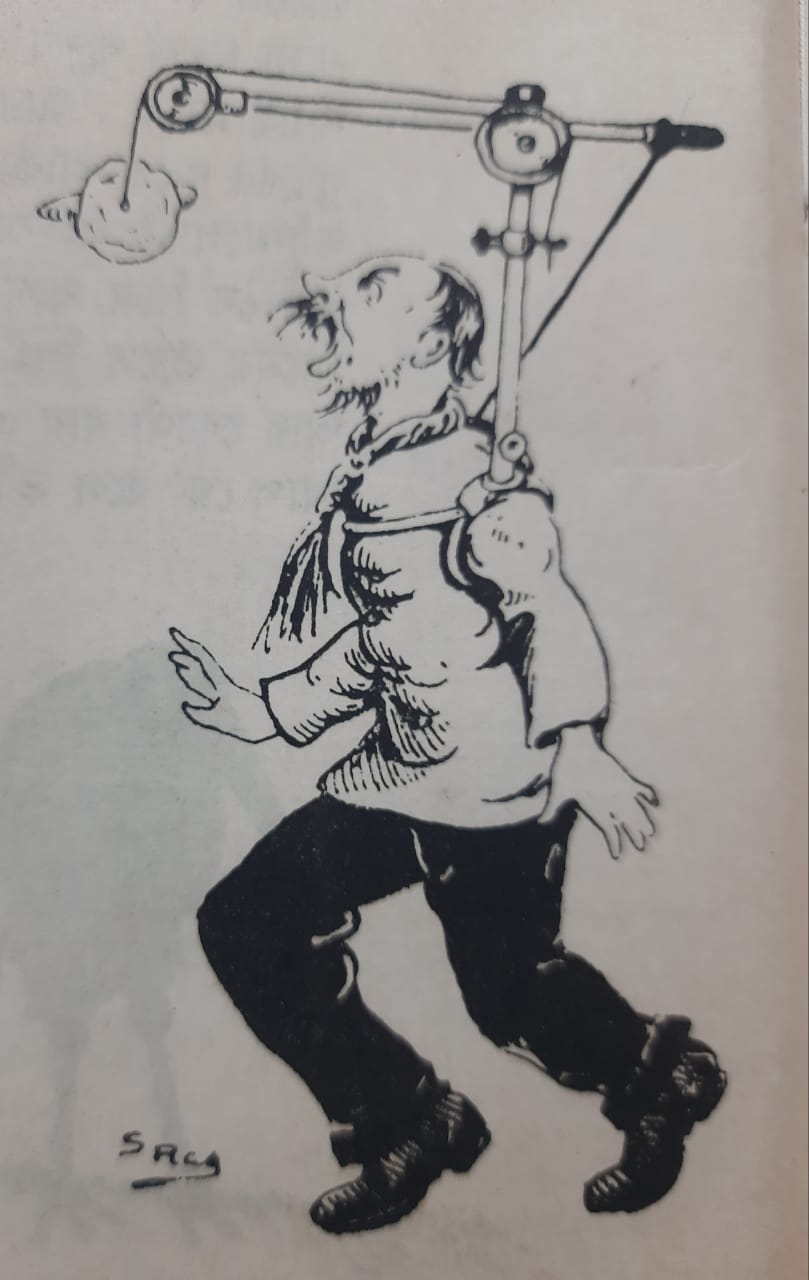 According to film and literature critic Sanjoy Mukhopadhyay, Sukumar Ray’s arrival in Indian literature is inexplicable and that he had no predecessor.

“At his time, literature, not only in Bengal but also globally, was governed by reason. They believed that nothing on earth existed which cannot be reasoned by reason. Ray introduced the logic of the irrational. Even the Surrealist movement started in 1924. But Ray had written hajabarala by 1921-22. It’s a surreal, absurd world, where nothing could be explained by reason,” Mukhopadhyay said. 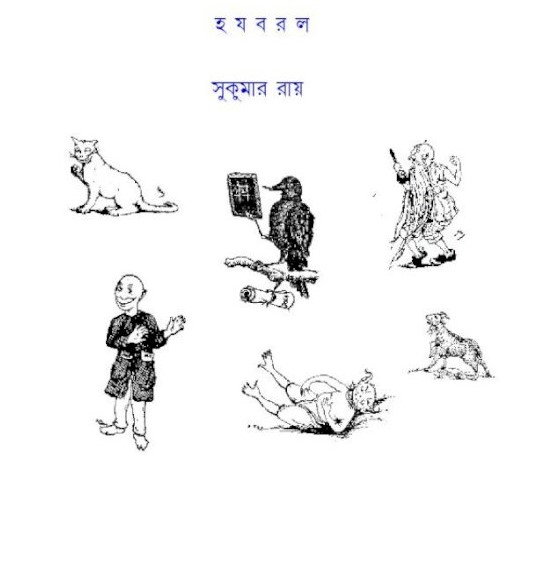 Hajabarala, a story, begins with a cat turning into a handkerchief and ends with an absurd trial ending with the judge, an owl, ordering 30 days in jail and seven days of ‘fansi’ or death by hanging.

Even though Ray’s volume of work is quite thin given his short life of 36 years - everything can be compiled between two covers - there would be no dearth of examples.

Physics research scholar Abhik Banerjee is often reminded of the scene from hajabarala where the judge is seen sleeping, but when pointed out, he refutes and insists that he only had his eyes closed. “Scenes from hajabarala are perfect for political parodies or satires and would perfectly reflect the present times,” said Banerjee, who also has a knack for theatre.

Looking at political alliances that he thinks were inconceivable, such as the Bharatiya Janata Party (BJP)’s alliance with the Jammu and Kashmir People’s Democratic Party, or that of the Congress with Shiv Sena, Banerjee is reminded of the poem titled Khichuri, or khichdi, which describes creatures like Bakachchhap (a mix of heron and turtle) and Hansjaru (a mix of duck and porcupine). The poem ends with:

The lion is pained for not having horns/Merger with deer gave him the horns.

Ray self-illustrated his poems. His works have frequently been compared with the writings of Lewis Carroll (1932-1898) and the art of Edward Lear (1812-1888), with whose works Ray was acquainted.

The trend of introducing children to Ray works continues. Journalist Avijit Ghosal, whose son, Abhinandan, is eight and a half years old, gave his son Ray’s collected works as the first Bengali book. Now studying in class 3 at an English medium school, Abhinandan has a poem by Ray in his Bengali syllabus. But he actually read his works before school.

“I enjoy reading it as much as he enjoys reading it. There are many lines and imageries from his work that I am frequently reminded of seeing today’s socio-cultural and political developments,” said Ghosal, now in his 50s, who too had first read Ray in his early school days. “Every child has to read these as an adult,” he said.

During 2019 and 2020, when the BJP’s and the Hindutva camp’s principle slogan, Jai Shree Ram, were gaining popularity in West Bengal, it alarmed a section of those who can loosely be described as ‘secular-liberals’. They brought forth in their social media discussions several images and scenes from Lakshmaner Shaktishel, a play which can be described as a humorous adaptation of a scene from Ramayana. They placed it in the context of intolerance, arguing that the iconic stature of this play shows how the Bengali society had always accepted making fun of deities (such as Ram and Hanuman here) as integral to the culture.