A look-back on Outlook's reportage during those grim days of a war we won, but one that should never have been. 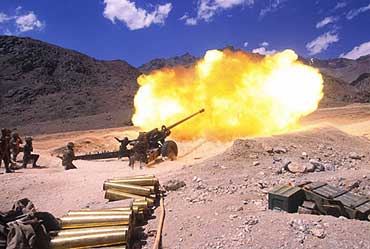 June 21, 1999
Raising The Pitch
India goes on offensive as hopes of an early peace diminish
Given A Raw Deal
Kargil Diary
'Mercenaries There Are Tough'
War Of Guile
Battle Report
Time For Big Push

CRICKET
My Neighbour, My Foe
Pakistanis rue their defeat in a match worth more than the Cup
'India Came On Just Too Late'

June 28, 1999
Last Journey Home
Grief and pride bind the families who have lost their brave sons to war
Bomb That Bombed
Fighting Every Inch Of The Way
Operation Kargil, A Month Later
The Siachen Factor
The Hi-Tech Way To Win The War
Double Jeopardy
Patience Is A Virtue
Pak's Pact With Blood
The Road Not Taken
India's Foreign Legion
Fanatic Zeal In English Climes

July 5, 1999
A Step Across The Thin Line?
To widen or not to widen the conflict-that is the vital question. Troops want a free hand, but it's not coming just yet.
The Civilian-Military Divide
We Lost The Cup, We Must Win This'
Ajit Bhattacharjea: The Nuke's Blunted Edge

BORDER REPORT
The Next Front?
This was always a war-zone. But now with the flare-up in hostilities, the people of this crucial sector are filled with a sense of foreboding.
Vigil On The West

JAPAN
The Miffed Samurai
From Pokhran to Kargil, Japan continues its coolness to India

July 12, 1999
WAR VETERANS
Warriors We Forgot
They gave a part of themselves to the nation, fighting its wars. But now they live beyond the pale, in unseen misery
War's Labour Lost
Ready To Serve Again
The Way It Is
No Kind Words
Battling On

Pakistan's Dilemma
There is increasing opposition within Pakistan to the military exercises its army is engaged in. But prime minister Nawaz Sharif is caught in a cleft stick-on the one hand, domestic and international pressure is on him to withdraw.
The Road Ahead

MEDIA
A News Twist
The press reserves criticism for the government, praise for soldiers

LINE OF CONTROL
Bordering On The Impossible
The LoC as a de jure border? It's a solution few dare endorse
The Larger Picture

DIPLOMACY
Backroom Boomerangs
Secret diplomacy is not a bad thing per se, but as India and Pakistan discover, extremely difficult to hide
No To Nukes

DIPLOMACY
The Power Of Silence
India's neighbours and NAM members refuse to ta ke sides, but the MEA says it's no cause for worry
Ramananda Sengupta

July 19, 1999
Clouded By Distrust
Will Pakistan fulfil its commitment to persuade the intruders to withdraw from Indian territory?
The Beginning Of The End For Sharif?
Us, Them And The Us
Teresita C. Schaffer: A Changed Perspective

WAR REPORT
The Task That Remains
Despite the Indian successes, fighting intensifies as Pakistan sends in reinforcements
With Flying Colours
Examples To Cite

KASHMIR
Ignition Point In Tinderbox Valley
With the focus on Kargil, infiltrations elsewhere may bode ill

ARUN SINGH
Back From The Cold
Arun Singh returns, but in the role of facilitator this time around

July 26, 1999
DEFENCE
On Permanent Watch
With a post planned every 200 yards along the Line of Control, the real logistical test begins now

COVER STORY
A Pyrrhic Victory
A bilateral solution seems distant. The US, wielding a stick over both nations, is the real winner.

MEDIA
Jai Journo, Jai Jawan
Objectivity was the biggest casualty in the coverage of the Kargil conflict

MEDIA
Not The Whole Picture
Television should fight its instinct to glamourise war, which makes it a propaganda wing of the state
The Rumour Mills

LEADERSHIP
... And A Touch Of Madness
Getting the best out of the man on the battlefield can take many different things

SOCIETY
Cash For Your Tears
Ideologues, politicians, corporate houses, socialites and celebrities...for many it's time to exploit a nation's love for its soldiers

Kargil, Post Mortem
Finally, Operation Vijay did manage to live up to its name. But what led to it in the first place?
An Air Of General Discontent
Loll Before The Fall

MEDIA
What The West Saw And Heard
With a muddled media policy, India may have lost a chance to score brownie points. Yet, there were moments of rare candour.

August 2, 1999
Command Failure
Contrary to impressions, the man on the spot provided timely warnings but in a callous lapse, the military and political leadership failed to react. Now, a cover-up may be on
Speaking In Many Tongues

FOCUS
The Defusion Bomb
De-escalation makes economic sense, but what could be the political cost on both sides?

BIHAR
Martyrs To Unemployment
In a surreal episode, poverty more than patriotism leads to the unfortunate deaths of 23 young men aspiring to join the army

August 9, 1999
DEFENCE
The Kargil Cover-Up
Despite denials by the Army, 'Outlook' stands by its story

DIPLOMACY
More Kudos, Less Bite
The ARF summit took the Indian line, even if it didn't seem so at first glance

INTERVIEW
KARL 'RICK' INDERFURTH
"Trust Has Been A Casualty"
The US assistant secretary of state for South Asian affairs Karl "Rick" Inderfurth speaks with L.A. Joseph in Washington on America's role in the Kargil crisis and its aftermath. Excerpts:
Clear Agenda

August 16, 1999
DEFENCE
Muddier By The Day
The truth about Kargil becomes a casualty as the army pulls out all stops in an increasingly murky cover-up

INTERVIEW
JASWANT SINGH
'Polls Are An Obstacle To Talks With Pakistan'
The US hasn't got a handle to interfere in Kashmir because of its help during the Kargil conflict, says external affairs minister Jaswant Singh. It's been a diplomatic and a military victory for India.

August 23, 1999
Peace, Anyone?
An intensifying proxy war, restive neighbours, a downed plane... A truce looks a long way off
It's Overt Combat Now
New Turf, Old Intent
The Red Dragon Comes Calling
A Shot In The Foot?
Still In A Mire

August 30, 1999
DEFENCE
Liberal With Laurels
The hurry in honouring the heroes raises the bogey of politics

September 06, 1999
The War That Should Never Have Been
A set of documented facts brings to light the truth about Kargil

November 29, 1999
The New Cold War
In their first winter in the Kargil heights, Indian troops face their toughest enemy: nature
The Countermoves
Maj Gen.Mathew Mamen: If There's Leadership, There'll Be No Problem'
The Real Killers

October 2, 2000
War & Witch-Hunts
Army chief V.P. Malik, just before retiring from office, fixes blame for Kargil only on soldiers
The Commanders Who Failed