Sports offers great many moments of victory and joy, but none as sweet, poignant and memorable as comebacks. But if you ask the purists, neither Navratilova nor Paes should have been there in the first place... 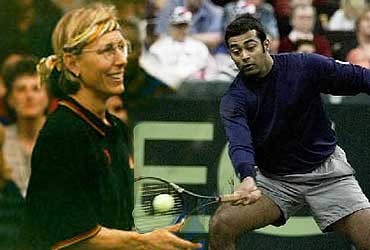 Sports offers great many moments of victory and joy, but none as sweet, poignant and memorable as comebacks.

In recent years, think of Goran Ivanisevic winning Wimbledon 2001. Two weeks earlier, after yet another early-round loss, at Queen’s, frustrated and forlorn, he contemplated giving up the sport for good. But the All-England Club remembered his three appearances in the final, and gave him a wildcard. The rest, as they say, is history.

His is a victory that won’t be remembered by history for the quality of tennis played, rather for the circumstances, emotions and drama that surrounded it. For Ivanisevic, very much a tennis player in the twilight of his career, every match won then was a mountain climbed. And we, the fans, knew.

As he made his way up the draw, we sensed his story could have a fairytale ending. Tired of seeing "Pistol Pete’s" domination at Wimbledon, we were looking for a change. And who better than Ivanisevic.

Here was a brash, temperamental, unpredictable serve-and-volley exponent in what would probably be his make-or-break tournament. Here was a man who had more demons to exorcise on centre court than any other active tennis player. Here was a showman, who, regardless of whether he won or lost, always gave people a reason to talk about him and the state of his game (mostly, what was wrong with it!).

We liked it when he scowled and berated himself on missing a shot, we liked it when he peeled of his shirt and scampered around court after winning a match like a 14-year-old, we liked it when he talked of alter egos at press conferences (the "three Gorans", with the 911 Emergency Goran coming in at the crunch and telling the Inner Goran and the Outer Goran, "guys, guys, one of you has to be in control").

On Saturday, August 31, the tennis world was witness to another one of those heart-rendering comebacks. Well, it wasn’t a comeback in the strictest sense of the word, but it was the equivalent of one. Two "have been" tennis champions getting another day in the sun.

As the night crept up at Flushing Meadow, Martina Navratilova and Leander Paes toppled top seeds and defending US Open champions Todd Woodbridge and Rennae Stubbs from Australia in their first round mixed doubles match.

If you ask the purists, neither Navratilova nor Paes should have been there in the first place. Navratilova is 45, an age where you pick up a tennis racquet to give a coaching lesson, not to play a competitive match, specially on the professional tour.

Paes, 29, on the other hand, did have age on his side, but his poor run of results through the year seemed to suggest that his game was coming apart and that his career needed a resurrection of sorts.

After his regular partner Mahesh Bhupathi decided to part ways in the middle of the year, to link up with Max Mirnyi (the big-serving man from Belarus who looks and plays like a lumberjack), Paes found himself left out in the cold, hurt and wounded.

With most doubles pairings having committed themselves for the year, Paes had to hook up with a new partner for practically every tournament. Their respective results made for more contrasting reading. While Bhupathi-Mirnyi enjoyed good success, Paes seemed to be making guest appearances at tournaments, rarely crossing the early rounds. It was sad to see a solid doubles player, one of the country’s best flag bearers on the sporting scene, fade away like this.

But then, sport, like life sometimes, offers second chances. A chance to find redemption, to get a new lease of life, to have another "moment". It all comes together in a bizarre, unexplainable way. To try and string together the pieces is a futile endeavour, best left alone. But what must be savoured and celebrated is what transpires.

Apparently, in this case, the story goes that Navratilova walked up to Paes and thundered: "You are playing mixed doubles with me." Dare Paes refuse, even if he wanted to? He just nodded his head, and they were on. It was a special pairing, one that would warm the cockles of any Indian tennis fan’s heart. Said Paes: "It was probably one of the most cherished moments on a tennis court that I've had in my whole career."

To think of it, we nearly missed it. For a majority of the Indian media, sport seems to start and end with cricket. And while Navratilova and Paes were teaming up, the dailies was reserving their ink for the politics and commercialism in cricket -- whether Indian cricketers would sign contracts that would give them a few less lakhs to take home but give them the right to play in one of the seemingly endless barrage of one-day tournaments.

Just as well that the US Open was being covered live by a regional broadcaster Star Sports and that its team has always been sensitive to such pairings and match-ups. They were there to capture that sporting moment.

As Vijay Amritraj put it, it was "absolutely delightful" to watch the two of them play together. Both Navratilova and Paes are great exponents of the doubles game, who play for the love of it. Navratilova was one of the few top singles players who always made it a point to play doubles (the other notable name that comes to mind in the Open era is John McEnroe).

She won 167 doubles titles in her illustrious career, most of them partnering fellow American Pam Shriver. Eight years after she retired, Navratilova returned to the women’s circuit at Wimbledon 2000 to play doubles. She hasn’t won a major, but she has notched up some decent results. And the defeat of Woodbridge and Stubbs must rank as good as any.

She looks fit as a fiddle. The body is as trim as ever, the arms muscular as ever, the legs pumping as ever. Says Navratilova: "The speed is there. I don't have as much strength because you lose that with age. I can get stronger, but I don't want to hit the weight room like I used to."

Her commitment to playing and having a good time on court is absolute. And the game is still there. The swinging left-handed serve which takes the receiver beyond the tramlines when delivered from the ad court, and which swings into the linesman manning the middle line when dished out from the deuce court. The sharp volleys. The instinct to "guess" where the next ball in going to be. And, most importantly, the desire to be on court, train, compete, be an athlete, do what she does best -- play tennis.

It’s what Paes also does best. It’s what he has been doing practically all his life. And if you gave this sensitive, zealous, patriotic man with modest tennis talents a choice, it’s what he would like to do for the rest of his life. But then, the body has its own rhythm, its own balance, its own callings. Paes knows that. Three to four years, he says, is all he is good for.

Teaming up with Navratilova might not do wonders for his ranking or bring in tournament wins, but what it will surely do is bring him back to the show courts, stoke the fire in his belly that seemed to have been abating, make him more hungry to play and win, draw the best out of him for his remaining years. Adversity and tradition is what gets Paes fired up on a tennis court, proof being his stellar Davis Cup performances over the years. And, in that grand design, Navratilova might have been the best thing to happen to him.

A time will come when both Navratilova and Paes will hang up their tennis shoes for good. But, for now, let’s relish these two champions display their wares on court once more and remind us of the beauty of sport.

Says Navratilova: "I know I don't play as well as I used to, but I still play pretty well. For me the key is not to think, 'I should have made that shot. I would have made it 15 years ago.' I can still make it now pretty well. Maybe not as hard or good an angle, but I can still make it good enough to win. But I don't want to talk about age. I want to talk about what I can still do on the court. I can still hit some good shots. That's what's fun. The ball doesn't know I'm 45 years old."

It’s sport at its glorious and poignant best.

More Coverage The Navratilova-Paes duo lost in the second round to Els Callens of Belgium and Robbie Koenig of South Africa 7-6 (7-5), 6-4. Hope to see them at the Australian.