Horrifying as the Malala Yusufzai incident is, it is less a ‘wake up call’, and more of a sign of things to come in Pakistan 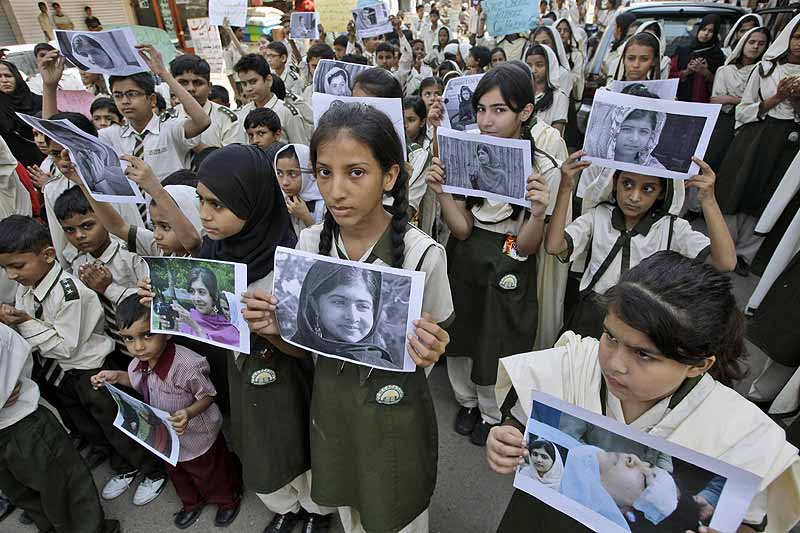 "We have a clear cut stance. Anyone who takes side with the Government against us will have to die at our hands. You will see. Other important people will soon become victims."

In a most deplorable pre-planned act of terror, the Swat Chapter of Tehreek-e-Taliban Pakistan (TTP), also known as Swat Taliban, targeted Malala Yusufzai, a 14-year-old children’s rights activist, and Pakistan’s first National Peace Prize winner, on October 9, 2012, while she was returning from her school in Mingora, the headquarter of Swat district in Khyber Pakhtunkhwa (KP). Yusufzai was shot in the head and remains in a ‘critical but stable’ condition at the time of writing.

As always, the TTP claimed responsibility for the attack with immense pride, though TTP ‘spokesman’ Ehsanullah Ehsan denied targeting the activist because of her demands for education, asserting,

We carried out this attack, and anybody who speaks against us will be attacked in the same way. Malala is targeted because of her pioneer role in preaching secularism and so-called enlightened moderation… She was young but she was promoting Western culture in Pashtun areas. She was pro-West, she was speaking against the Taliban and she was calling President Obama her idol.

Adding to the plight of the girl, the spokesman further threatened that she would be targeted again if she survives, because she was a “secular-minded lady”. He also warned that other youngsters who were involved in similar activities would also be targeted.

Yusufzai had been awarded the National Peace Prize on December 19, 2011, for her struggle against TTP’s ban on girl education in 2009. The then Prime Minister Yousuf Raza Gilani had directed the cabinet to award the National Peace Prize every year to a child younger than 18, who contributes to peace and education in the country. The attack on Malala, however, demonstrates the risks of such projection, even as the tightening grip of TTP in the region makes life impossible for such young activists.

Yusufzai had chronicled the ban on girls’ education with British Broadcasting Corporation’s (BBC’s) Urdu Online Diary. In another interview with CNN, on November 24, 2011, Malala declared, “I was scared of being beheaded by the Taliban because of my passion for education. During their rule, the Taliban used to march into our houses to check whether we were studying or watching television.” Fearing house searches and a Taliban rampage, Yusufzai would hide her books under her bed.

Reports indicate that Maulana Fazlullah alias Mullah Radio, the leader of the sectarian terrorist Tehreek-e-Nafaz-e-Shariat-e- Mohammadi (TNSM), which forged an alliance with the TTP after the Lal Masjid (Red Mosque) Operation in 2007, had personally briefed two local shooters from his hit squads to target the 14 year old girl, whose insistent campaigning for western style education and secularism over the past four years had infuriated the Islamist extremists. The Fazlullah-led TTP in Swat had earlier issued death threats against Yusufzai, but she remained undeterred.

The failure to kill Malala has turned the TTP’s ire against her father, Ziauddin Yusufzai, who is a member of the Swat Qaumi Jirga (Swat National Council), an anti-Taliban, peace jirga. A spokesman of the Swat Taliban, Sirajuddin Ahmad, presently based in the Kunar province of Afghanistan, threatened that, having failed to kill Malala Yusufzai, they would target her father.

While the Malala Yusufzai incident has had a strong international resonance because of the tender age of the victim, and her exceptional courage in standing against the extremists, the targeting of critics of the TTP’s agenda, and of others who fail to adhere to the group’s arbitrary and fanatical ‘moral codes’ has been routine since the rise of the group in 2007. The assassination of the then Punjab governor Salman Taseer on January 4, 2011, was among the most dramatic cases of  targeting of those who questioned the extremists’ codes. Taseer was killed by his own bodyguard, in retaliation against the governor’s denunciation of the controversial blasphemy law and his advocacy for Aasia Bibi, the Christian woman sentenced to death on November 7, 2010, for alleged blasphemy. The TTP claimed responsibility for the attack, declaring, “The man who killed him (Taseer) was from among us.” The assassin, Malik Mumtaz Husain Qadri, was lionized by a group of 500 Pakistani clerics praised who declared him a Ghazi (Islamic warrior), and warned people against attending Taseer’s funeral prayers, claiming that such action would tantamount to blasphemy. Another prominent victim of Pakistan’s extremist tide was the federal minister for minorities affairs, Shahbaz Bhatti, killed on March 2, 2011, in the same context of his opposition to the blasphemy law.

The situation is infinitely compounded by the complex nexus between Islamist terrorists—principally the TTP, LeJ and Sipah-e-Sahaba Pakistan (SSP)—religious organisations, politicians, and the military and its various covert agencies. Significantly, the murder of Syed Saleem Shahzad, the Asia Times Online Pakistan Bureau Chief, on June 1, 2011, in the Mandi Bahauddin district of Punjab, widely believed to have been executed by the Inter Services Intelligence (ISI), demonstrates the shared objectives of the extremist formations and state agencies in suppressing all dissenting or critical voices. Shahzad’s book, Inside al Qaeda and the Taliban: Beyond Bin Laden and 9/11, had exposed ISI-al Qaeda involvement in the November 26, 2008, Mumbai terrorist attacks (26/11). The book had argued that the attack was scripted by ISI officers and approved for execution by al Qaeda ‘commanders’. Shahzad’s writings immediately before his ‘detention’ by the ISI, and his subsequent killing, had also drawn attention to the role of “insiders” in the attack on the Mehran Naval Air Base in Karachi on May 22, 2011.

The media has been an easy and vulnerable target of extremist attacks. On October 13, 2012, the TTP Chief Hakimullah Mehsud issued "special directions" to his subordinates in different cities of Pakistan to target media groups, both Pakistani and international, for their hostile coverage of the TTP in the wake of the Malala Yusafzai incident. An interior ministry official is reported to have disclosed that intelligence agencies had intercepted a phone conversation between Mehsud and a subordinate, Nadeem Abbas alias Intiqami, in which the TTP Chief was heard directing Abbas to attack media organisations.

Over the years, the spaces of freedom in Pakistan have been progressively diminished as a result of Islamist extremist intimidation and terrorism. According to South Asia Terrorism Portal (SATP), a total of at least 41 journalists have been killed in Pakistan since 1994 (all data till October 14, 2012), and the Committee to Protect Journalists described Pakistan as “the world's deadliest country for the press for the second consecutive year” in 2011. Among recent incidents, on February 21, 2012, Ashraf Khan, a Karachi-based correspondent for The Associated Press, received a handwritten letter in Urdu saying that the TTP was “watching his every move”. He was warned to stop working for the dajjal (infidel) media and refrain from his “anti-Islam activities”. Regrettably, instead of providing him protection, he was asked to quit his job by his organisation.

In another bold attack on January 25, 2012, TTP militants opened fire at the offices of local news channel Aaj TV in Karachi, injuring two persons, including a security guard. The TTP claimed responsibility for the shooting, and threatened attacks against other television channels that failed to feature their point of view. Ehsanullah Ehsan of TTP declared, “We had informed the management of Aaj TV to include our view on issues, but the channel had become a mouthpiece of the government.” Further, threatening Geo News TV channel, Ehsan warned, “Geo TV is going to be our next target if they do not change their behaviour towards us. They have been using very bad language against the Mujahideen.”

TTP’s lexicon has always been replete with anti-West and anti-women ideologies, advocating the establishment of its distorted model of ‘Islamist’ governance’. Significantly, Swat has faced a brunt of the TTP challenge as a result of the severe erosion of the structures of governance, and the growing and excessive exposure to extremist violence, particularly by the Swat Taliban, which targets women and young girls from coming into public life. Their tactic of bombing girls’ schools is the most visible symbol of their broader regressive ideology, reducing opportunities for education and growth among girls to a minimal. During their reign of terror from 2007 to 2009, when Swat had been surrendered by Islamabad to TTP control, some 400 private schools had discontinued girls’ education. This announcement had come in the wake of a deadline of January 15, 2009, issued by Maulana Fazlullah on December 24, 2008. Nearly 40,000 girls were denied their basic right to seek education as a result of this single action.

The brutal attack on Malala Yusafzai has provoked mass protests across Pakistan and has brought many religious scholars and clerics to openly condemn the attack and urge the government to eliminate the terrorists wherever they are hiding or operating. A conglomeration of 23 Barelvi Muslim organisations, Sunni Ittehad Council (SIC), which was formed in 2009 with a ‘declared agenda’ to counter the extremist TTP ideology and initially organised several anti-TTP rallies, also issued a fatwa that declared the attempted assassination on Malala as "un-Islamic". However, SIC had lent support to Punjab governor Salman Taseer’s assassin in 2011. Indeed, the SIC had undermined its own agenda by threatening the state with “anarchy” if Asia Bibi were to be pardoned for her alleged blasphemy. SIC’s anti-extremist position has been constrained by its own reactionary sectarian outlook. Moreover, one of SIC’s constituent organisations, Sunni Tehreek (ST), has been included in the interior ministry’s watch list of banned outfits. On February 10, 2012, intelligence agencies advised strict surveillance over ST, which was not only becoming politically active, but was also believed to be morphing into a terrorist formation.

The widespread outrage over the Malala Yusufzai incident is not, however, a credible index of any change in the civil-military strategy in dealing with Islamist extremism and terrorism in Pakistan. Though the attack is, as foreign minister Hina Rabbani Khar expressed it, a “wake-up call”, there have been many such alarms in the past as well, with no concrete or sustained state response thereafter. It is Islamabad’s policy of duplicity and deceit that has created and sustained spaces for Islamist extremism and terrorism in Pakistan, and exported violence beyond its borders. Despite growing alarm among the general public and limited political constituencies over the rising anarchy and collapse of institutions in the country, however, there is little evidence that this broader strategy of deception has been significantly diluted. Horrifying as the Malala Yusufzai incident is, it is less a ‘wake up call’, and more of a sign of things to come.