There are more than enough mixed metaphors. There is too much history...What is the story and the glory? How will the tale be told? 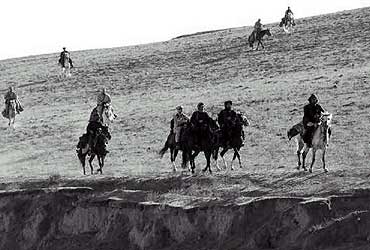 outlookindia.com
-0001-11-30T00:00:00+05:53
It is a serial, a real cliffhanger.  It's a fable.  It's about cavemen.  Cavemen on horseback and in high-tech command centers.  Stone Age meets Space Age, isn't that what they say?  Vice President Cheney is in a bunker in a mountain.  Batman had a Batcave.  Osama bin Laden is like that, like a bat, but he's also a rat, scurrying into his fortified hole, leaving droppings, a videotape here and there.  I've already heard songs about it, Country songs and corridas.  I'm sure there are ballads in Arabic.

There will be epic poems, folktales.  There are probably lots of limericks.  There will be serious plays and ridiculous movies.  It's a religious lesson.  It's a morality play.  It's a pageant.  It's a costume drama.  They are the Evil-doers.  We are the Evil un-doers. Hooray.  Boo, hiss.

We try to follow the narrative.  We post-moderns know what the old bards knew: there are many narratives.  Al Qaeda, a band of True Believers from around the world, gather in Talibanland, and with money from a dozen or a hundred sources storm the castle and citadel of the Super Power.  The Twin Towers fall and fall and turn inside-out. Tolkien may be too tame for our tastes.

The fire is still burning in lower Manhattan.  (There is a coal mine in Pennsylvania that has been burning for 40 years.)  There are fires burning in the hearts of people everywhere.  There is snow on the mountains in Afghanistan.  "Into the valley of death rode the six hundred."  (Tennyson, 1853.)  There is major poetry here.  Death from the sky.  Avenging angels.

What is the story and the glory?  How will the tale be told?  There are heroes of different cultures and uniforms, of different worldviews and accents and time zones.  They meet from the opposite ends of the earth, from Washington, D.C. and London, at the Khyber Pass, for God's sake, and on CNN and al-Jazeera.  Strike up the band.

The fighting is taking place where Alexander the Great, the British Empire and the Soviet Union gave up and went home.  Now, the Western allies and the Northern Alliance, the United Front, the United Kingdom and the United States against Al Qaeda, the warlords of the Pentagon and the clans of the Stans, the tribes and the bribes, against the guerrillas, criminals, terrorists, fanatics, brigands, holy warriors all.  It's a melodrama.  It hurts too much to laugh.

This is great material.  There are more than enough mixed metaphors. There is too much history.  It is Grand Guignol and Greek chorus.  It is 1492 in reverse, from the siege of the Alhambra to breaching the Pentagon.  It is 661, with the split between Sunnis and Shi'ites still reverberating.  It is the Old West and the new West.  Wanted: Dead or Alive.  Saladin meets Paladin.  $25 million on his head, for his head on a platter or a spike.  We are told, tellingly, Afghanistan is the size of Texas.  And you're supposed to know you Don't Mess With Texas.  This will be a musical soon, even an opera.  I've always liked "The Desert Song" (1926, then three movie versions).  But that was a love story.

"In the next war, the dead will be buried in cellophane," Ernest Hemingway wrote, in a poem, not his war reporting.  What an old-fashioned idea.  The dead in New York became dust.  An even older idea.

It's El Cid, Lawrence of Arabia, Kipling, the Great Game, Marco Polo, the Desert Mystics.  Take notes for the mid-term exam.  "Poetry is emotion recollected in tranquility," wrote Wordsworth.  Meanwhile, bombs are falling, fires are burning.  Christmas is a-comin' and the geese are getting fat.  People killing people, what do you think of that?  Peace on earth as a vaudeville routine.  It's in such bad taste, but that's the name of the game.  Please, hold your applause.  It's not over yet.