The Asians seemed headed for a comprehensive win after bundling out the Africans for 106 but inclement weather put paid to their hopes. 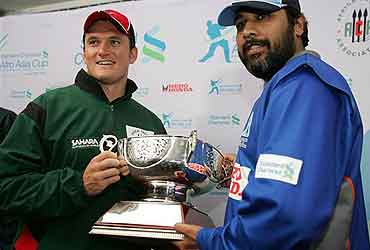 Asia XI and Africa XI shared the Afro-Asian Cup as rain had the final say, forcing the third and final one-day international of the inaugural series to be abandoned at Kingsmead today.

The Asians seemed headed for a comprehensive win after bundling out the Africans for 106 but inclement weather that had been playing hide and seek throughout the day allowed no play after the innings break.

The rain that began in the morning as a light drizzle forced the start to be delayed by nearly two hours.

It returned at the break and forced another delay. As the rain held back for about 45 minutes, the umpires announced a curtailed match with a revised target to be achieved in 38 overs.

But the skies opened up once more, leaving the umpires with no option but to abandon the match.

Africa won the series opener by two runs at Centurion on Wednesday while Asia levelled the series with a 17-run win here yesterday.

The two teams split the winners' purse of $25,000 which was in addition to their prize money of similar amount for the earlier wins.

The African total of 106 owed much to the rearguard knock by Shaun Pollock who hit an unbeaten 44 off 35 balls to give his team a total to defend.

Zaheer was the wrecker-in-chief with three for 21 but Shoaib was equally devastating.

The Africans, however, hit back immediately to remove Asia's swashbucklng openers Virender Sehwag and Shahid Afridi with only seven runs on the board.

Sehwag was bowled neck and crop by Dale Steyn for five before Afridi skied a pull shot off Pollock to Heath Streak at square leg.

After the Asian batsmen's domination yesterday, it was the turn of their bowlers to drive a wedge through the African line-up.

The pitch was full of runs yesterday seemed filled with venom today with the ball seaming all over the place.

Given the overcast conditions and the amount of moisture that had seeped in, thanks to the steady drizzle since morning, African skipper Graeme Smith's decision to bat first was inexplicable.

When the match did start, Smith returned to the pavilion for nought after Shoaib had him plumb in front on the fifth ball of the match.

Boeta Dippenaar, after sticking around for more than 30 minutes for his seven, edged Zaheer to Mahela Jayawardene at second slip, the Sri Lankan's fifth catch in two days.

Jacques Kallis, rested yesterday as a precaution after straining his lower back muscle, blocked 20 balls before being adjudged leg before to Zaheer.

Then followed the suicidal run out of Jacques Rudolph and Ashwell Prince's fierce cut off Akhtar straight into the hands of Muttiah Muralitharan at point. Three wickets in the space of 12 balls for no addition to the score meant Africa had lost five wickets for 26.

The Asians had no hesitation in calling for their Super Sub Ashish Nehra replacing Bangladesh's Mohammad Ashraful.

Justin Kemp might have been a bit unlucky to be ruled leg to a sharp incoming delivery from Zaheer but that only reinforced the decision to include Nehra.

Pollock and Tatenda Taibu counter-attacked before Taibu was gobbled up by Sehwag at third slip off Abdul Razzaq.

Pollock plundered 14 runs off a Nehra over and his methods paid dividends as 51 runs were produced by his eighth wicket partnership with Streak.

That stand ended with the Zimbabwean all-rounder falling leg before to a Afridi top-spinner.