The option of a quota for women in the candidate list of parties is not a `dilution' of the Women's Reservation Bill but a better way of realising the objectives. 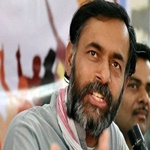 IT IS time for a rethink on the Women's Reservation Bill. For all those who found the drama in the Lok Sabha infuriating, it is time for hard thinking. It is also time to look ahead and think of a fresh way out. Let there be no doubts about it. It was not just Mulayam Singh Yadav and co. who blocked the bill on May 6. If the BJP and the Congress were determined, all the opponents could not have blocked it. Coming from a regime that passed POTA in the teeth of widespread opposition, the touching search for consensus, the sudden surge of respect for the minority viewpoint makes impossible demands on one's credulity. The truth is that with the exception of the Left parties, the entire political establishment is responsible for the non-passage of the Bill. Behind Sushma Swaraj's exasperation there was an unmistakable touch of relief. Relief that the Bill was dead, and that her party was not going to be blamed.

Let us also be honest about something else. The now-dead Bill was a deeply flawed piece of legislation. Those who drafted it were absolutely right about the fundamental principles: the abysmally low representation of women in our legislatures can and must be corrected through binding legal provisions. But in their enthusiasm they paid inadequate attention to the mechanism they were proposing for realising their objectives. The Bill proposed reservation of constituencies for women on the lines of that for Scheduled Castes and Scheduled Tribes, with a provision to rotate them with every election. This would have meant that nearly half of the constituencies would have been reserved for one group or another. Rotation would have meant that at least two-thirds of the sitting MLAs and MPs would not go back to their constituency for re-election. This was an invitation to disaster and would have robbed our system of whatever accountability it has now.

What then do we do? The ruling establishment would like us to forget about the matter till the next Lok Sabha is constituted. We can do better than that. The apparent deadlock on the Bill can and must be turned into an opportunity by agreeing to an alternative proposal that the political establishment would find difficult to say no to.

This alternative has been around for some time and is known as the Election Commission Proposal. First originating in an article by some social scientists and activists in Manushi and subsequently endorsed in principle by the Election Commission, this alternative involves a compulsory quota for women in party nominations. If accepted it would mean that the political parties would be required to field at least a certain percentage of women candidates, but would be free to decide where to field them from. A version of this method was recommended way back in the National Perspective Plan approved by Rajiv Gandhi. This incidentally is the wisdom gleaned from global experience as well. If you care to visit the website of the inter-governmental organization, International IDEA, you would discover that party quota was the route taken by most democracies where women did succeed in securing a decent political representation for themselves. For some reason the original framers of the existing Women's Reservation Bill think that this alternative is a poor and diluted version of their proposal. A close look would show that if formulated carefully to guard against possible misuse, the party quota method can meet the objectives better than the existing Bill.

It is important to understand the alternative being supported here before anyone rushes to reject it. While the basic approach of the Election Commission is robust, its proposal is fairly open ended on details and can therefore be misused to subvert the objectives of women's reservation. If a fresh alternative is to be worked out along these lines, it is necessary to be vigilant and firm about some of these points of detail. First and foremost, the women's quota must be compulsory and should not be reduced below one-third. It is believed that the Samajwadi Party and some other opponents of the Bill would prefer no more than a 10-15 per cent quota. This needs to be resisted. While there is nothing sacrosanct about the figure of 33 per cent, in the last few years it has come to be associated with the aspirations of ordinary women and the women's movement. Anything less would appear to them to be a defeat. Also, one-third quota would ensure that even if initially the actual representation is a little below this level, the presence of women in legislatures is still substantially above a minimum threshold.

Second, a specific provision should be made to ensure that parties cannot cheat by giving `losing' seats to women. The simplest way to ensure that is to have a provision that the quota should be calculated at the State level in a parliamentary election and at the district level in the Assembly election. This provision would ensure that Laloo Prasad Yadav cannot fool the law by giving his party ticket to women only from Tamil Nadu! He will have to give one-third of the RJD ticket in Bihar to women. In an Assembly election he will have to do so for each district within Bihar.

Is this a sufficient safeguard? Clearly, 33 per cent of the party ticket to women is not a guarantee of 33 per cent women winning elections. Parties might still try at least initially to give relatively weaker seats within each State and district to women. This may reduce their electoral success ratio and result in their legislative presence being lower than 33 per cent. But unless all the parties and the voters conspire, there is no way the final proportion would be less than 20-25 per cent. Even this would represent a manifold increase over the existing average of 8 per cent in the Lok Sabha and 4 per cent for the State Assemblies. In any case, no party that entertains any serious hope of winning a majority can afford to give up one-third of the seats as lost. In the long run, this method may also result in more women than 33 per cent winning the elections. The electoral record of women candidates in India suggests that their probability of winning an election is a little higher that their male colleagues.

In other words, the party quota option is not a `dilution' of the existing Bill but a better way of realising the objectives. Besides, if this option were to be taken, the demand for a quota within the quota used to bloc the present Bill would lose much of its force. Under this system, parties can chose to give the ticket to women in those areas where woman leaders of their preferred community are in a position to contest. If the parties do not nominate OBC or Muslim women under this alternative arrangement, they cannot blame the system for it. The alternative proposal has another advantage that it does not require an amendment to the Constitution. All it requires is an ordinary amendment in the Representation of the People Act. The party quota could be made mandatory only for recognised political parties that occupy more than 90 per cent of the legislatures. The political establishment has no justification for not passing it in the remaining life of the current Lok Sabha.

While opposing the Bill, Mulayam Singh Yadav declared in the Lok Sabha that he is not opposed to the idea of reservation for women and that his party would support a quota-based alternative. It is time to make him keep his word.

(Yogendra Yadav  is a Fellow of the Centre for the Study of Developing Societies, Delhi.)