For Narendra Modi the more things changed, the more they have remained the same over the years. Study the past to understand the present and you may be able to predict the future. 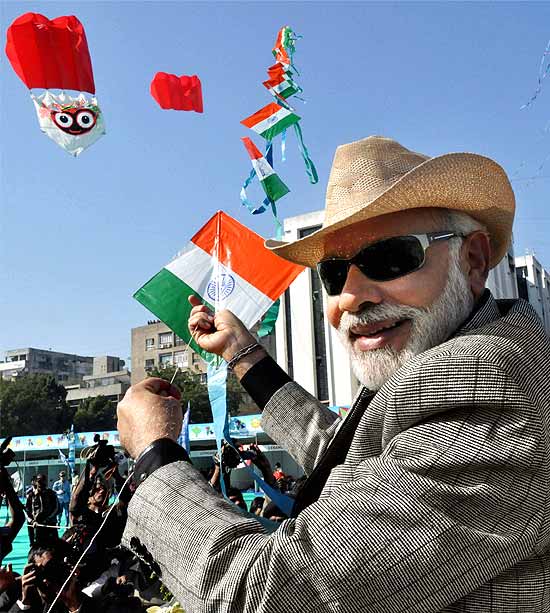 Gujarat chief minister Narendra Modi’s political career was cradled in turbulence and has advanced through turmoil. Right from his RSS pracharak days to his deputation to the Gujarat BJP in 1987, through a series of engineered crises via the Sanjay Joshi saga and now the Nitish Kumar conundrum, the more things changed, the more they have remained the same over the years. The simple living pracharak has in a quarter century metamorphosed into a stellar designer dressed politician who is now positioning himself strategically for the prized prime ministerial post. Essentially though, his politics has remained the same: Rise to conquer, provoke to prevail.

Provocation has been the bedrock of Modi’s politics. It was his advertisement campaign in Bihar newspapers during the BJP national meet in Patna in June 2010 that incensed Nitish and set off a chain reaction that almost threw a spanner in the coalition works in a state where polls were due a few months later. Again it is Modi’s reference to the casteist politics of Bihar and UP politicians that provoked JD(U) in general and Nitish in particular to issue a riposte, thus triggering the latest prime ministerial slug-fest between the two NDA coalition partners. Notwithstanding the fact that the Gujarat chief minister is himself a practitioner of fractious caste politics, a media too engrossed in the juicy story of a Modi-Nitish personality clash, for still yonder prime ministerial pluckings, failed to notice what he managed to achieve through his snide provocation. He has extracted an official RSS endorsement for his Prime Ministerial candidature. And it is no mean a personal achievement at a time when he is locked in a grim battle within his own party, both in Gujarat as well as at the national level. The official stamp comes in very handy!

In Gujarat which goes to polls later this year Keshubhai Patel, the BJP patriarch whom Modi outmanoeuvred to replace as chief minister in 2001, is now openly railing against him. Patel had similarly opened a front against him before the 2007 assembly elections but shied away from a straight confrontation. This time, the man has become a magnet attracting support in hordes from his own Patel (Patidar) community besides dissidents within the BJP, including those hurt by the Sanjay Joshi episode. Patel who ranks among the founding fathers of the Jan Sangh in Gujarat has vowed to take the battle to its very end. The old RSS hand did the rounds of the top BJP leaders in Delhi—LK Advani, Murli Manohar Joshi, Sushma Swaraj, Arun Jaitley from June 20-21—knowing fully well that they were incapable of acceding to his demand for replacement of Modi. For all practical purposes his was a trip to bid farewell to the BJP and a few more of the old warhorses are set to follow suit. This in effect means that Modi will have to contend with two rivals, the Congress and a third front spearheaded by the BJP rebels banded under the Mahagujarat Janata Party (MJP) banner hitherto led by Modi’s former MoS, Gordhan Jhadapia. MJP, bolstered by Keshubapa as he is fondly called, hold the potential of cutting into BJP votes.

The RSS endorsement from no less a personality than the Sarsanghchalak Mohan Bhagwat is likely to be a formidable weapon for Modi who seems set to face sniper fire and booby traps within his own party from a formidable array of national leaders. Modi realizes as much as Nitish that prime ministerial posturings account for little in a pre-poll scenario for it will be the post-poll numbers notched up by parties that will prove decisive.

According to political analysts tracking Modi, the Sanjay Joshi ‘affair’ that was turned into an issue at the Mumbai national BJP meet was just a trial run of sorts to test the farthermost limits that the party national leadership can be pushed to accommodate his demand. The BJP top brass caved in and the RSS acquiesced .So far no individual has got the better of the organisation, not even stalwarts like Balraj Madhok, Govindacharya and Madanlal Khurana. The RSS always put its foot down. But Modi has, at least so far, prevailed.

It was again a provocative salvo, the reference to casteist feuding in Bihar and Uttar Pradesh, that had the goat of the Bihar chief minister. As the ‘shelling’ intensified, Modi maintained a discreet silence .He had well anticipated that the attack would come on his Achilles heel—his secular credentials tainted in the 2002 communal strife that followed the Godhra train carnage. Ultimately, the RSS supremo intervened, providing him the endorsement that he so desperately requires to hush all opposition within the party. This is vintage Modi.

Study the past to understand the present and you may be able to predict the future.

Jhadapia recollects how demonstrations were engineered against L.K.Advani in Ahmedabad after the then state party president Kashiram Rana replaced Modi with Suresh Mehta as secretary in the early nineties. It was Jhadapia who had engineered it at the behest of you know who. Again it was the suspension of three Ahmedabad municipal corporation corporators in late 1995 when Modi ruled the roost in the state organizational set up that ultimately snowballed into the rebellion by Shankersinh Vaghela .When Atal Bihari Vajpayee mediated to bring about a truce, midnight demonstrations were organized by the mahila wing of the BJP charging him with a sell-out. Given a BJP ticket from Godhra, Vaghela was defeated through a well planned internal conspiracy. The stripping of veteran BJP leaders who had sided with Vaghela after Vajpayee’s public meeting in Ahmedabad was an equally well planned insider job that saw him finally quit the BJP.

Many others who built the BJP in Gujarat have followed Vaghela out of the BJP over the years. These include former chief ministers Suresh Mehta and Dilip Parikh, former education minister Nalin Bhatt, former MoS Home, Gordhan Jhadapia and another MoS home, late Haren Pandya. The survivors like former chief minister Keshubhai Patel, former union minister Kashiram Rana, former state unit president Rajendrasinh Rana, former MP A.K. Patel and countless others have been sidelined to the point of irrelevance. Ironically it was Advani who shielded Modi when Vajpayee wanted him replaced after the 2002 riots and his blind belief in his disciple that saw a whole line of leaders leave the party in Gujarat. The mentor woke up only when the disciple sought to upstage the guru’s anti-corruption crusade with a three day sadbhavana fast of his own in the pursuit of his national ambitions.

Thus it stands to reason that the BJP or for that matter the NDA is set to face considerable turbulence in the run up to the 2014 Lok Sabha elections as Modi seeks to aggressively forge ahead in the single minded pursuit of his goals. His rise and consolidation of power in Gujarat has seen division in the ranks of the BJP and even Sangh Parivar organs. The process is likely to be replicated at the national level in the days to come. Already the tremors are being felt. Meanwhile, Modi can rest content that he has crossed a major milestone by securing the RSS endorsement to his prime ministerial positioning.