The final was a big let down after the West Indies started well. But not for nothing, these Australians have so much of self-belief and the engrained sense of winners in them. 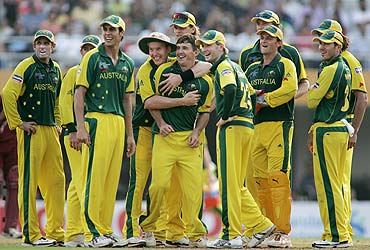 The final was a big let down after the West Indies started well. But not for nothing, these Australians have so much of self-belief and the engrained sense of winners in them. It's difficult to judge by scores that the Australians probably had their worst pummelling in years in early overs of a match.

Amidst the creaks and groans of its warriors now getting on in years, Australia has now unearthed two serious young talents. Nathan Bracken and Shane Watson plugged the gaps when runs and wickets were leaking.

Bracken was brilliant with the new ball. His deliveries can swing a long way, sometimes defying the angle at which they pitch and occasionally dip back alarmingly at batsmen cramping them up for space.

He is also good enough to vary his pace when nothing works. We saw this new facet of his bowling when the West Indies were on a rampage. A few more barren overs and the Calypso Kings would have been all over Australia. Luckily, Bracken stood in the way. The ball to dismiss a rampaging Chris Gayle was arguably the best of the tournament.

Watson too lent his considerable weight in bowling and batting. There were concerns if his shot-selection was on par with his technique and crunchy hits. He chose to address it on a big stage; letting go the balls outside off, presenting a straight bat when pitched in line and working it on legs whenever it slid on to his pads.

These Australians make their investment in young talents wisely. Bracken and Watson did not take long to come up with answers to alien conditions. They absorbed the lessons of Malaysia, shocks of a few early tremors in India and are now better off it.

All Australia now need is another good spinner on hand for these conditions and who knows Dan Cullen might be working on his own tutorials sitting in the dressing rooms of Malaysia and India.

Let's also not forget to take a bow to the golden oldies. Glenn McGrath, the champion that he is, went for 22 in his first two overs and then in the next five overs yielded only two runs. He made life difficult for Brian Lara before snaring him up behind the stumps. An exceptional is one who can recover from a beating. McGrath surely is one.

Also, once again sumptuous was Damien Martyn. You watch him in different conditions of Mohali or Mumbai or Jaipur and he always seems to be in complete control.

His footwork and the ease with which he finds the gap is breathtaking. Australia invariably lost early wickets in this tournament and invariably Martyn came good. He has survived the reversal of the Ashes only because he is so damn good.

The West Indies, on the other hand, now do not need to look beyond Chris Gayle and Shivnarine Chanderpaul as their opening pair. Both are unorthodox and if purists' are upset it is nothing compared to what they do to bowlers' demeanour. You just cannot have a plan for them on their day.

One has not seen such sights on a cricket field often when the Australians would huddle after every other delivery. They could still be tested on livelier wickets but at least for the World Cup, they would do.

The West Indies now have a clear grasp of areas which need a leg up. Their batting needs to shore up and they need a fit and hungry and keen Lara.

They need a better batsman in their wicketkeeper, some good finishers for the final overs and a couple of other good medium-fast bowlers. Their top order and fielding have improved drastically. Other teams now must look to find ways so that there is no repeat of these finalists in the World Cup in a few months from now.

India, as organisers, were defeated in their quest by the quality of pitches in early season. There was more than even contest between bat and ball than we have come to accept in one-dayers. There would still be questions if day-night matches should have started earlier to avoid the dew factor playing an important part in determining a result.

That Australia still won showed the champions usually find a way to prevail over elements.