He was much more than a secretary to Gandhi. On various occasions he has been described as Gandhi's Boswell, a Plato to Gandhi's Socrates, as well as an Ananda to Gandhi's Buddha-- his relationship with Gandhi is a taxonomic puzzle. 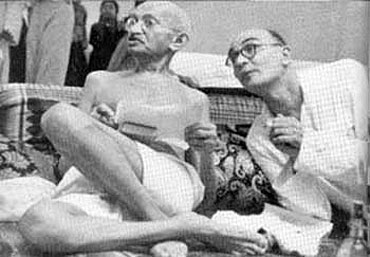 Although increasingly receding from our public commemoration, Independence Day remains an occasion to recall the contributions and sacrifices of the many Indians who wrought for freedom. Central to the story of our struggle for freedom is the role of Gandhi and the working of a unique, non-violent revolution that changed the face of the world. Behind this success of Gandhi, lies an entire ecosystem of men and women of all hues and colours, of varying political predilections, and from diverse religious, class, caste and national groups. This ‘Gandhian ecosystem’, to coin a phrase, consisted of two broad ‘kingdoms’. The first, and the well-studied part consists of Gandhi’s political colleagues. The story of Gandhi’s relationship with this diverse group consisting of persons like Nehru, Patel, Rajaji and several other politically prominent leaders is well documented. In contrast, the ‘non-political’ section of the Gandhian ecosystem has not received the attention that it deserves. Many of these individuals were described under the broad rubric of ‘constructive workers’. The work of these individuals was not limited merely to end British rule in India. Rather, they were inspired to aim for the lofty ideal of Purna Swaraj that encapsulated Gandhi’s civilisational mission of according autonomy and dignity to every individual. 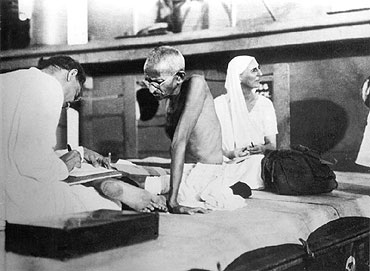 While one may explain this neglect of the non-political part of the Gandhian ecosystem as a consequence of the modern intellectual preference of the political over the moral and social dimensions of life, it nevertheless results in a limited understanding of what Gandhi represented. Although the Mahatma was undoubtedly their leader, these colleagues and compatriots were ineffable to Gandhi’s own personal evolution. Perhaps we can gauge the significance of such non-political figures in the Gandhian ecosystem by considering the fact that Gandhi broke his customary weekly silence on only two occasions in his eventful life. The first was when his nephew and creator of the khadi programme, Maganlal Gandhi, died in 1928. Years later when a compatriot had returned to Sevagram after a heart-attack, a distraught Gandhi broke his vow again. "How are you, Mahadev? " he enquired.

Those familiar with the name often know of Mahadev Desai as Gandhi’s secretary. Some will in addition recognise him as the translator of the Mahatma’s autobiography into English. However, as he was much more than a secretary to Gandhi, Mahadev Desai has on various occasions been described as Gandhi’s Boswell, a Plato to Gandhi’s Socrates, as well as an Ananda to Gandhi’s Buddha. This profusion of analogies point to the fact that Mahadev Desai’s relationship with Gandhi is a taxonomic puzzle. Undoubtedly he belonged to the non-political kingdom of the Gandhian ecosystem and was primus inter pares amongst the close circle from which Gandhi drew his material, psychological and moral sustenance. Nevertheless, these analogies are inadequate caricatures. To persist with our biological metaphor, while he was the tallest Gandhian, his originality, insightfulness, and creativity makes Mahadev Desai a species unto himself.

Mahadev Haribhai Desai was born on 1st January 1892 in Saras, a small village in the Surat district of Gujarat. An early fondness and flair for literature marked him out for a career in letters. By the time he earned his degrees in philosophy and law in 1913, Mahadev had read widely in both English and Gujarati and was preparing for a prosaic job. It was during this period that he met that great ‘fisher of men’, Mahatma Gandhi. By the end of 1917, after four years of tentative explorations, Mahadev Desai made a dramatic choice and threw in his lot with Gandhi. For someone on the verge of extricating his family from genteel poverty, this was a bold decision. Life with Gandhi, not yet the Mahatma, was going to be uncertain. But the sacrifice is made doubly magnificent by Mahadev’s decision to sublimate his own life to serve the needs of Gandhi. It was his way of serving the cause of his people.

Life with Gandhi was maddeningly busy for Mahadev. In addition to attending to Gandhi’s voluminous correspondence, carefully and faithfully reporting on Gandhi’s work, Mahadev also regularly contributed to Gandhi’s various journals. The man with a passion for literature now deployed his pen in the service of his leader’s many causes. However, true to his integrity, Mahadev never allowed his work as Gandhi’s secretary to come in the way of a daily regimen of hard physical labour that was the norm at Gandhi’s ashrams. And, as if this was not enough, Mahadev played a decisive role in many a nationalist campaign, Bardoli being the most memorable. Carrying out all these tasks was no trifling matter and Mahadev pushed himself to the bodily and psychological limits of human endurance. However, the effort and strain seldom showed. Perhaps Mahadev was aided in handling the burden of his work by his singular traits of equanimity, refined sensibility and a great capacity of love that tempered his steely conviction. If being in the midst of major political campaigns and crises was demanding, Mahadev would also have needed to draw on his inner reserves in the normal course of things. Being the secretary to the most sought after person in India was no ordinary job and it also meant countless hours spent managing Gandhi’s time by attending to his various visitors. Mahadev excelled in all such quotidian tasks. It would be no exaggeration to say that as significant as his contribution to the great events of the day was the simple fact that, as observed by a friend, Mahadev had "saved ten years of Gandhi’s time by diverting from him unwanted visitors"!

The contribution of Mahadev Desai in the form of reports and articles on Gandhi’s work is significant for they were a vital link between Gandhi and his people. Mahadev’s linguistic felicity meant that he wrote regularly in the English, Gujarati, and Hindi versions of Gandhi’s journals. It is through these writings that thousands learnt of the enduring meaning and value of the struggles and victories that animated Gandhi’s public and private life. But on occasion we are afforded a glimpse of the literary promise and independence of mind that Mahadev held in taut abeyance. In 1936, he translated Jawaharlal Nehru’s Autobiography into Gujarati for which Mahadev was assailed by criticism. On the one hand, he was castigated for helping promote a book in which Gandhi had been severely criticised and was also advocating a contrarian economic and social programme. On the other hand, the Socialists within the Congress, who considered Nehru to be their intellectual leading light, were suspicious that Mahadev would distort their leaders’ message! Mahadev refused to be bogged down by such doctrinaire criticism and wrote a lengthy preface to accompany his translation. In it, he pointed to the philosophical differences between Gandhi and Nehru and laid out an objective assessment of the literary and substantive content of Nehru’s work. While appreciative of the ideals that animated Nehru’s life and his unshakeable resolve, Mahadev chided Nehru for his failure to understand the philosophical basis of the Indian ethos.

If Nehru lacked a serious appreciation of Indian philosophy, Mahadev’s most enduring literary contribution lay in this philosophical tradition. In the manner of the seers of the past, he wrote a major commentary on the Bhagvad Gita. Intended as a short preface to his English translation of Gandhi’s interpretation of the Gita, Anasaktiyoga, this exegesis eventually ran into 125 pages! In this major work of synthesis, Mahadev explores the relationship between the Gita and other foundational texts in various Indic traditions. While dwelling at length on such fundamental concepts in Indian philosophy as prakriti, purushartha, karma, buddhi, and jnana, Mahadev also demonstrated a serious comprehension of Western philosophy. The commentary itself borrows from a long series of letters exchanged with Gandhi during the year that Mahadev spent away from the Mahatma in Bardoli. Today, one wonders how it was possible for both to find time for such a sustained philosophical conversation while engaged in a major Satyagraha campaign that made a major dent in the colonial edifice in India. Above all, Mahadev’s philosophical musings on the Gita remind us in our troubled times of the possibility of a non-doctrinaire and non-partisan study of ancient philosophical texts. 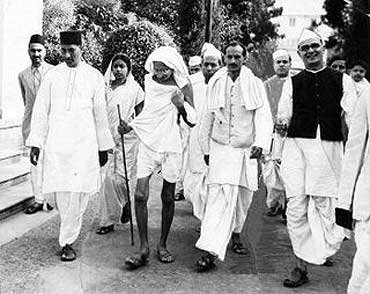 In the weeks preceding the Quit India Resolution, Mahadev, as usual had worn himself down and underwent a thorough medical examination. Preserved in an archival record, a medical report gives us the results of this physical and internal examination conducted on July 3, 1942 in Bombay. His haemogram was nearly perfect. He passed the glucose tolerance test without a problem, and his gastric system was functioning normally. In short, the physician and the pathologist could see no obvious problem with Mahadev’s physical health. But this physical well-being belied the intense mental anguish that had gripped him.

While the furies of the 1942 campaign lay ahead, Gandhi had announced that he would undertake an indefinite fast in the event of his being arrested by the government. Soon, after the ‘Quit India’ Resolution was adopted, Gandhi and Mahadev were arrested and taken to Poona to be lodged at the palace of the Aga Khan. While the debate about Gandhi’s fast raged inside and outside the Aga Khan Palace, Gandhi and his compatriots settled down into a daily routine in the jail expecting to be there for a really long time. By now, Mahadev was fully consumed by thoughts about the consequences of Gandhi’s indefinite fast. Gandhi and Mahadev argued incessantly about the fast. Mahadev did not want the Mahatma to give up his life through a fast. Unlike previous occasions, both Mahadev and Gandhi understood that the government was not going to relent and an indefinite fast meant a certain death. But none could have foretold the cruel turn of events. On August 15, 1942, hours after he had served Gandhi and cheerfully groomed himself in front of one of the numerous mirrors in the building, Mahadev Desai died of a massive heart-attack.

In twenty-five years of public life, Mahadev had compressed the work of a lifetime. As Gandhi remarked, he was a living example of "the wise, who live and work as if they were born to immortality and everlasting youth". In faithfully following the dictum of ‘Do or Die’, Mahadev Desai had paid the ultimate price in winning India its freedom.

In 1951, in a Foreword to D. G. Tendulkar’s landmark eight-volume eponymous biography of the Mahatma, Jawaharlal Nehru remarked that "No man can write a real life of Gandhi, unless he is as big as Gandhi". In the normal course of events, it would have fallen to Mahadev Desai to execute this task. In recent times, as if in carrying out the unfulfilled duties of his father, Mahadev’s son, Narayan Desai has written a four-volume biography of the Mahatma. While the release of its English translation is eagerly awaited, one is reminded of the suggestion of the anthropologist Verrier Elwin, that "it would be a very proper token of love for [Mahadev’s] memory if everything he has written could be collected and republished". The Collected Works of Mahadev Desai will not only represent a nation’s gratitude to one its finest sons, it will also be an invaluable historical record of the events of a quarter century that has defined modern India.

Their Free Speech And Ours