Outside, Allah-u-Akhbar pierces Nizamuddin's dank dawn air. It is still dark. Inside, electric light powers strength to my feverish body...

Outside, Allah-u-Akhbar pierces Nizamuddin’s dank dawn air. It is still dark. Inside, electric light powers strength to my feverish body. The mosque’s minarets radiate prayer calls all around-—coded signals emanating from old radio transmitter-towers— relaying the dangers of heat in this stale air. 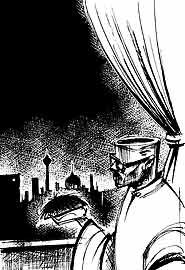 A bare body sleeps peacefully beside me—her face’s innocence and the generous curve of her eyelashes try to sweep away my skin’s excess heat, one that is fast making my bones pale and brittle.

A brief lull lingers outside. I cannot hear the heavy lyrics, their rhymes trying to invoke peace and respect, their wafting baritone instilling faith. Such things are luxuries for me now.

I lie, trying to piece together the eccentric song of my own inadequate breathing. It is a struggle. It is also a mystery. Mystery of a body’s architecture, its vulnerability, and its efficient circulation—they are perfect models I remember from school’s early lessons. They are only how things ought to be, not how they are.

Only now, I realise the intent of prayer’s persuasion and its seductive expression. I also value the presence and grace of the body that willingly lies next to me, as her breath tries to realign my will’s magnetic imprint, and my heart’s irregular beat. My hearing is trapped within the diaphragm’s circuitous drone—in Arabic’s passion that etches its parabolic script, sung loud that no slant or serif can be erased, altered or misunderstood.

Religion’s veil and chiffon—its sheer black and translucence, its own desire to give and want, its ambition to control and preserve. Such songs mean nothing if one’s own peace and privacy remain unprotected, or are not at ease. I want the chant’s passion, its heat to settle my restlessness. I want the song to soothe my nerve-ends so that the pain subsides, and faith’s will enables to rise. I also want the beauty of this faith to raise its heat—not body-heat but the heat of healing.

But for now, the diaphanous lull is a big boon. Here, I can calculate the exact path of my body’s blood-flow, its unpredictable rise and fall of heat, and the way it infects my imagination.

I step out of the room’s warm safety. I see the morning light struggling to remove night’s cataract.

Again, the mosques threaten to peel their well-intentioned sounds —to appease us all. But I see only darkness, and admire it—I also admire the dignity and gravity of heavy water and its blood—its peculiar viscous fragility, its own struggle to flow, sculpt and resuscitate.

In quiet’s privacy, I find cold warmth in my skin’s permanent sweat, in its acrid edge, and in my own god’s
prayer-call.

Living Among The Dead