'Poverty ... Is An Artificial Creation'

'It doesn't belong to human civilization, and we can change that, we can make people come out of poverty ... the only thing we have to do is to redesign our institutions and policies, and there will be no people who will be suffering from poverty' 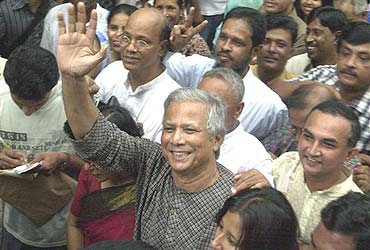 Excerpts from the telephone interview with Professor Muhammad Yunus immediately following the announcement of the 2006 Nobel Peace Prize, October 13, 2006. The interviewer is Adam Smith, Editor-in-Chief of Nobelprize.org. The link also provides an audio file of the full interview

Adam Smith: Hello, thank you, my name's Adam Smith. I'm calling from the website of the Nobel Foundation in Stockholm to congratulate you, and just to ask ...

Muhammad Yunus: Oh, thank you so much.

Adam Smith: We record one minute of interview with new Laureates as soon as they hear, so this is for this purpose.

Adam Smith: I just wanted to ask you ...

Adam Smith: Two very quick questions. The first is, obviously the prize will bring greatly increased publicity for your work, is there a particular message...

Adam Smith: Is there any particular message you would like to use the opportunity to get across?

Muhammad Yunus: The one message that we are trying to promote all the time, that poverty in the world is an artificial creation. It doesn't belong to human civilization, and we can change that, we can make people come out of poverty and have the real state of affairs. So the only thing we have to do is to redesign our institutions and policies, and there will be no people who will be suffering from poverty. So I would hope that this award will make this message heard many times, and in a kind of forceful way, so that people start believing that we can create a poverty-free world. That's what I would like to do.

Adam Smith: Thank you very much, and does your work with the ...

Adam Smith: Does your work with the Grameen Bank over the last three decades make you more hopeful that this is possible?

Muhammad Yunus: Oh yes, very much, we see the demonstration of it every day. People come out of poverty every day. So it's right in front of us what happens and it can be done globally, it can be done more forcefully, we can organize more things to go with it, so this is something not theoretical issue, it's a very real issue. People can change their own lives, provided they have the right kind of institutional support. They're not asking for charity, charity is no solution to poverty. Poverty is the creation of opportunities like everybody else has, not the poor people, so bring them to the poor people, so that they can change their lives. That's all we are doing. We didn't do anything special; lend money to the people so – but they never lent it to the poor people – all we did was we lent it to the poor people, and that makes the trick. That makes the change.

Adam Smith: Thank you very much indeed for speaking to us.

Muhammad Yunus: Thank you, thank you.

Adam Smith: One can hear in the background just how exciting this is for everybody so I'll let you get back to it.

Muhammad Yunus: I know, I know, there's a big crowd here, I know. Thank you, thank you very much, bye, bye.