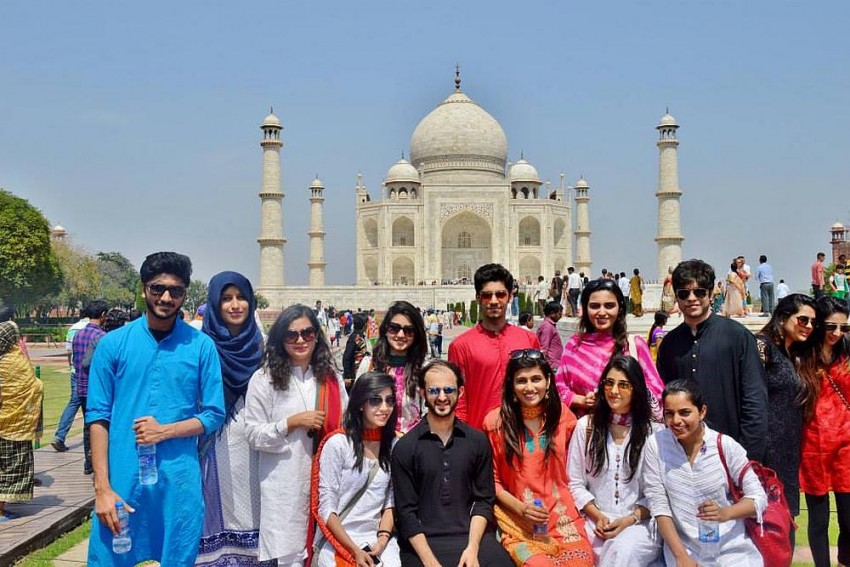 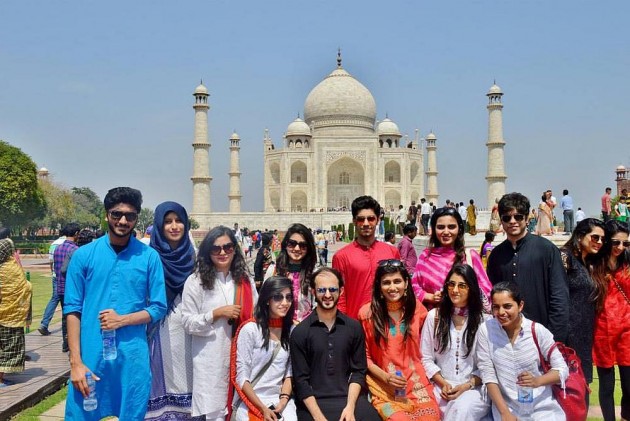 Aarefa Johri's account of Pakistani hospitality will resonate with those who have had the opportunity to go there. Their over-the-top hospitality can only be believed by those who experience it. As it happens, as Aarefa wound up her trip, a group of nearly 60 Pakistanis from Lahore University of Management Studies visited IIT Delhi towards the end of a visit to Agra-Amritsar-Delhi. An abridged compilation of their moving testimonies.

Rida Baqai says "Johari's piece gave me quite an ego boost as a Pakistani. But to be fair and honest, people across the border demonstrated such kindness to our rather large group that the assertion "Ordinary Indians hate Pakistanis" proved to be untrue. At OP Jindal Global University, students received us with chants of "We love Pakistan", gave us their own quilts and pillows to make us comfortable, dedicated songs to us. Some of us weren't allowed to spend a single penny on our trip. Our student hosts took care of us completely, even though they themselves survived on student budgets. On the streets, we got special discounts everywhere: for the rickshaw drivers or salesmen at Chandni Chowk, Lajpat Nagar or Janpath, the Pakistani customer definitely was king. A rickshaw driver volunteered to drop us all the way back from Connaught place to our hotel for free!

Ramsha Amir said she loves India "because of the greater freedom India has and openness. My friends in India are more liberal and open to ideas than the people in Pakistan."

The most powerful moment for several visitors was stepping across the border at Wagah. Zoya Paracha who had been warned by family "Don't tell them you're Pakistani" said: "One strip of white painted line divided the two nations. Walking past the white line, I was in India. The air felt the same, the people looked the same, the landscape was identical and so much so the Punjabi accent was exactly the same."

Maryam Zaidi expected a "dramatic change" upon crossing, "as if Alice suddenly ended up in an unexpected wonderland." But "people spoke the same language, same style of talking, wore similar dresses, same trees. Everything was the same. No Veer-Zaara style dramatic change occurred…culture really transcends boundaries."

Salaar Khan had visited Neelum Valley in north Pakistan, bordering Kashmir last year. "Standing in line inching towards the Indian side of the Wagah Border, I found myself unable to shake the image from my mind. Almost exactly a year ago, I stood facing the River Neelum. Across the river, a woman in bright red was tending to her livestock. On my side of the river, a woman in yellow was doing the same. Yet one stood in India, and one in Pakistan. Gazing across the water, I realised that if I could throw the pebble in my hand across the river, it would be in a different country. I would not, myself be able to cross into India, but if I could just throw far enough, this innocuous pebble would. I took aim and threw it across. It landed safely in a thick patch of grass and blended right in. This time, I did too. What a strange thing a border is."

The parallels in the impressions, sentiments, language between the Delhiites and Lahoris are remarkable.

"All our lives we are socialised into an anti-Indian rhetoric whether it's cricket or religious sensibilities. On both sides of the border this 'otherisation' and demonisation has led to great destruction not only of property and human life but also the human self — the spirit. The need is for people on both sides of the border to rise above the selfish, greedy motives of our politicians and our military establishment." (Shanzae Asif)

"The problem lies in how we see each other. Since our childhood, we are either told or we end up believing that Pakistanis are bad, they want war, they are the antagonist to India etc. It is upto us, do we want our children or grandchildren to live in similar bloodshed era or do we want them to live where there is brotherhood." (Naman Bhatnagar)

"All this made me realize that the differences that I had in my mind, all the preconceived notions were a product of what our governments (past included) and media wants us to believe. We are brought up celebrating wars in which Indians got killed, whereas we should be mourning the loss of life as a whole." (M. Usman Mirza)

"All the conflicts between us have arisen because some shrewd people imposed other fragmented identities upon us…differences created by greedy politicians can't be sustained anymore." (Siddharth Dwivedi, Delhi)

Aman Saurav (Delhi) felt that the interaction "is sure to cause a ripple in the future of relations between India and Pakistan. We simply wanted to embrace our brothers and sisters from across the border. It was an eye opener and I can simply never go back to the tunneled thoughts of Pakistanis that I had."

One IITian was so moved, he said, by the spirit of peace and love, he dreamt that the the two countries would be reunited! Sanwal Hotiana responds to that: "Today, two guys from IIT talked about a united India. Professor Ishtiaq Ahmed replied that Pakistan is a reality and from a Pakistani perspective, peace could only be achieved if its existence is accepted. Indians must accept the idea of an independent nation state of Pakistan as a reality."

Yasoob Haider (from Delhi) writes: "I always wondered why people from these two nations only remembered each other either when there was a cricket match, or some spat at the border. Why we have allowed this huge barrier to build between us ordinary people. Yesterday some Pakistani students took the first step towards a dialogue. As Dr. Ishtiaq Ahmed (professor from Pakistan) said, "the best argument in favour of peace is that over the past six decades, we have tried war; let's give peace a chance."

Compiled by Reetika Khera at the Indian Institute of Technology Delhi.

No One Wants To Be Garissa