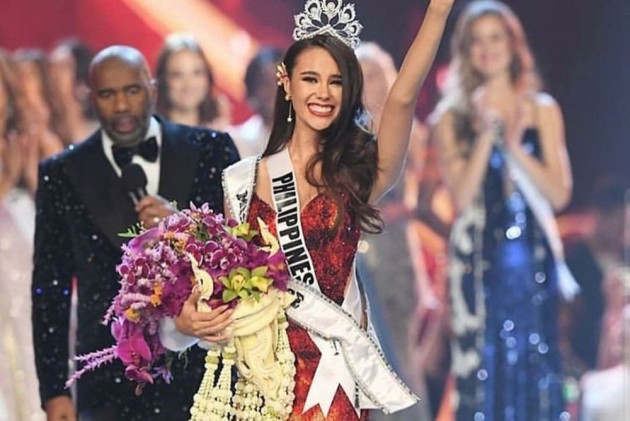 Catriona Elisa Gray from Philippines succeeded 93 contestants from around the world to emerge the winner of Miss Universe 2018 - as chosen by an all-women jury. India's Nehal Chudasama failed to make it to the Top 20 of the Miss Universe 2018 pageant.

The Preliminary Competition is LIVE tune in now https://t.co/FmYSy2ZQx1 pic.twitter.com/Hx47ZhFp0B

India had pinned high hopes on Nehal, 22, to end a long drought for the country at the pageant as Lara Dutta had last brought back the crown in 2000.

But South Africa's Tamaryn Green, a medical student, and Venezuela's Sthefany Guterrez, studying to be a lawyer, secured the first runner-up and second runner-up spots at the gala ceremony, where Spain's Angela Ponce made history as the first transgender woman to contend for the title of Miss Universe.

Hosted by Emmy Award-winning Steve Harvey, the show here on Sunday saw Gray taking an ecstatic first walk as Miss Universe in a dazzling red gown with a thigh-high slit. She was crowned by Miss Universe 2017 Demi Leigh Nel-Peters, who comes from South Africa.

Gray holds a Master Certificate in Music Theory. An adventure junkie, she is an HIV/AIDS advocate and volunteers as a Teacher's Assistant to the students at an NGO, according to the official Miss Universe website.

Catriona Gray did all these. I don’t want to assume but dang this girl is such a fighter, the way she walks, the way she speaks, the way she smiles, every single thing she does? She do it at it’s finest. Plus i’m loving her confidence. #MissUniverse2018
pic.twitter.com/Er4Ky3amaQ

In the final question round, Gray was asked about the most important lesson she has learnt in life and how would she apply it in her time as Miss Universe.

"And if I could also teach people to be grateful, we could have an amazing world where negativity would not brew and foster, and children would have a smile on their face."

Girl is beautiful, smart, and knows what is important in life. Always be grateful. I stan. #MissUniverse2018 pic.twitter.com/aINnvgFuic

Earlier in the competition, Gray was asked about her views on legalisation of marijuana. She said: "I am all for it being used in medical use but not so much for recreational use, because I think if people were to argue what about cigarettes and alcohol... Well, everything is good, but in moderation."

The competition began with the Top 20, with five semi-finalists being chosen from each region - The Americas, Europe, Africa and Asia Pacific, as well as a Wild Card category.

In a newly formed segment, the contestants were made to make an 'Opening Statement', giving out a message for the world.

Then, the contestants were narrowed down to the Top 10, leading to the swimsuit and evening gown rounds. They were further streamlined to the Top 5 and were asked interesting questions ranging from issues like MeToo to immigration.

Singer Ne-Yo lent a musical touch and Ponce took a proud walk down the ramp, winning a standing ovation for representing diversity and inclusion in its true sense.