On Ashura, one of the days of holy observance for Shias we revisit two short poems by Mir Anees, from an excellent new translation of Urdu poems into English 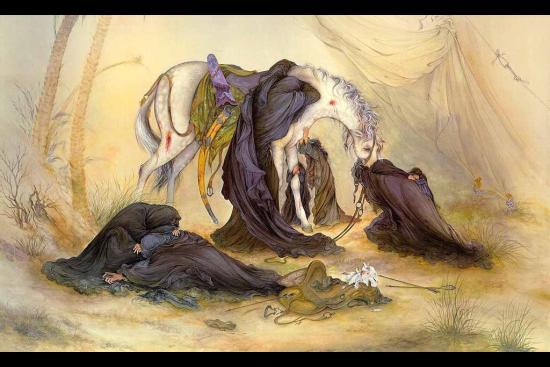 The Taste of Words: An Introduction to Urdu Poetry
Translated By Mir Ali Raza With an introduction by Gulzar
PENGUIN BOOKS RS 390/ 312 PP

Mir Babar Ali Anees (1803–1874) bestrode Urdu poetry like a colossus in the early nineteenth century, which is remarkable considering the fact that his poetry dealt nearly exclusively with religious themes and more specifically with the passion play of Karbala, which dominates the religious narratives of Shia Islam. His contribution to the marsiya (or elegiac poetry) was so breathtaking that it informed the entire broader corpus of Urdu poetry. The marsiya is an epic poem with between 100 and 200 stanzas of six lines each, where, typically, the first four lines rhyme, as do the last two. [1]

Here, I have chosen to translate from two of Anees’s poems, both regrettably brief. The first is a six-line verse from a marsiya, which is a good exemplar of the musaddas with clean rhythms and evocative manzar-kashi, or the ability of the poet to depict a scene as drama. This verse describes the moment before Imam Husain leaves for his final battle. The menfolk have all perished; he is in the company of only his little daughter Sakina and his sister Bibi Zainab. This particular verse is one of the most celebrated marsiya verses, having been performed repeatedly in the public domain as well as featured in Shyam Benegal’s Sardari Begum (1996).

The second piece that I have placed below comprises five verses of a marsiya, which is quite regularly performed at Shia religious gatherings called majalis. I have heard this poem since my childhood, and can never read or hear it without tears spontaneously welling up in my eyes. The verses I have chosen provide a unique tableau, where the unfolding drama of Imam Husain’s sacrifice is being narrated to angels and prophets by God (indeed, to me it is metaphorically symmetrical that Anees has a God-like command over his language). God instructs his audience to see this moment of martyrdom as the ultimate expression of closeness between the creator and the subject. The last verse shifts the action back to the desert of Karbala, where Husain is on the ground, and his executioner readies himself for the final blow. In a few short verses Anees moves from grandeur to pathos, from the depiction of Husain’s power and stature to that of his helplessness, from his exalted position in the eyes of God to the utter hatred his killers exhibited toward him and his family.

Readers may please note the similarities in language and scene construction of Anees’s and Dabeer’s work to Brij Narain Chakbast’s verses about the Ramayana.

That fateful afternoon, ready to fight stood brave Husain
No one to help him mount his horse, loneliness fed his pain
Little Sakina brushed his robe, her sadness to contain
Husain simply stood with head bowed, and quietude did reign
Karbala’s hero was alone, no friends left to pay heed
His brave sister then stepped up, to help him mount his steed.

When Fate Scattered Husain’s Congregation on That Desert

When fate scattered Husain’s congregation on that desert
The pious ones did praise his devotion on that desert
To pray, the Godhead showed his intention on that desert
A sword was raised, it sought execution on that desert.
A cry arose, indeed he is the leader of both worlds
Watch my brave Shabbir’s call to prayer made in the shade of swords
By his power, the Almighty bared heaven’s great window
Suddenly the sky opened up its doors from head to toe
All curtains of the firmament opened to that scene’s glow
Prophets and angels were summoned: ‘Watch, and you need to know
That I am his admirer, to know me is in his blood
And why not? He’s the grandson of my dear Mohammed.

‘This is the sort of worship that is done only alone
Those who love me contend with swords, not with the kingly throne
They are beheaded, yet they prostrate their heads to the One
They fulfil their promises, and then with this life are done.
When I convene the funeral prayer of this creation bold
You’d best attend, for you would join legions of prophets old.’

Heaven-dwellers began to weep at this great twist of fate
Husain composed himself to pray, proclaimed ‘Allah is Great’
Alas till he finished his prayers, killers refused to wait
Millions attacked that single soul, so vicious was their hate
As the Prophet’s son read soorahs and repeated God’s word
Murderous Shimr sat on him, lifted the fatal sword.

[1] The interested reader may find much more about Anees at Mir Anees: A Poet Extraordinaire, edited  by Abu Talib Rizvi, . A longer marsiya has been translated by David Matthews, and is available in the public domain.