Pakistan Should Have Shown Decency To Let Kulbhushan Jadhav's Mother Hug Him, Says His Childhood Friend

Jadhav, who is on death row in Pakistan for alleged spying, met his wife and mother in Islamabad in a carefully choreographed event that unfolded in tweets, photos and TV footage 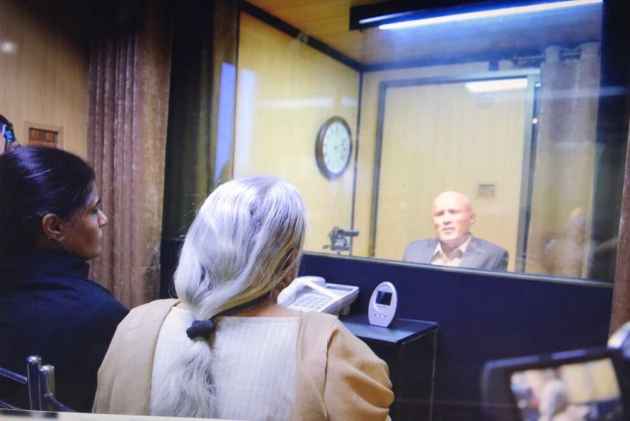 As news channels played out images of Kulbhushan Jadhav meeting his mother and wife - separated by a glass wall - a childhood friend of the former Indian Navy officer expressed his frustration on the Pakistani authorities not allowing the family members to hug him.

Jadhav, who is on death row in Pakistan for alleged spying, met his wife and mother in Islamabad in a carefully choreographed event that unfolded in tweets, photos and TV footage.

The 40-minute meeting, which took place after many representations, at the heavily guarded Foreign Affairs Ministry building came after the International Court of Justice asked Pakistan in May to stay his execution.

Tulshidas Pawar is Jadhav's childhood friend and lives in Mumbai's Parel area. He watched images of Jadhav's mother Avantika and wife Chetna sitting across a glass screen flicker on the TV set at his home.

"Can you imagine what a mother who last saw her son two years ago must have felt when allowed to meet him from across a glass partition and was unable to touch him," Pawar told PTI.

"The Pakistan authorities should have allowed the mother to hug her son," he said. "This carefully choreographed meeting was a sham."

He said, "What Pakistan did (allowing Jadhav's mother and wife to meet him) is just a spectacle for the global community," Pawar said.

For him, the treatment meted out to Jadhav's mother and wife by the Pakistan authorities was "unacceptable".

"The next hearing in Jadhav's case in the International Court of Justice is scheduled soon. Pakistan mere completed a formality by arranging the meeting in such a manner," he said.

"Pakistan should be condemned for not having the decency to allow a mother to hug her son, for disallowing a wife to touch her husband," Pawar said. "One can only imagine the plight of Jadhav's mother."

Pawar said he and Kulbhushan's other friends would request Prime Minister Narendra Modi and External Affairs Minister Sushma Swaraj to bring Jadhav back home at the earliest, he said.

It was the fist time Jadhav was meeting his family since his arrest in March last year.

The 47-year-old was sentenced to death by a Pakistani military court on charges of espionage and terrorism in April, following which India moved the ICJ in May. It is expected to hold another hearing in March or April.