At Outlook SpeakOut, Ekta Kapoor speaks about how she was a couch potato as a child, whiling her time away and only looking to earn ten grands to fill her shopping bags. 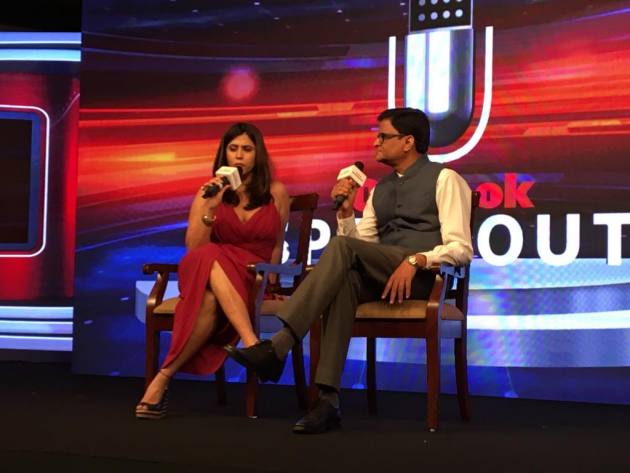 “She was wearing a white shirt and blue jeans, and everybody wondered how could a bahu wear jeans? But I spotted the spark and knew that she’s going to be the bahu of Balaji Telefilms,” is what Ekta Kapoor reminisced about her dear friend and the first TV bahu of the country, who was also sitting in the audience, Smriti Irani.

In conversation with Outlook’s Giridhar Jha at the second Speakout Conclave and Vinod Mehta Memorial Lecture being held in Delhi on September 28, the Indian TV czarina speaks about how she was a couch potato as a child, whiling her time away and only looking to earn ten grands to fill her shopping bags.

Women Achievers On How They Found Their Voice

Her father made her understand that if she did not work, she would get married off, and that, she wasn’t ready to settle for.

So a content company took off in 1994, after her father, veteran Bollywood actor Jeetendra, invested Rs 65 lakhs in launching a project that the Kapoor scion felt would be a failure. “No one was willing to buy that content because they felt it’s rather average. And then my father’s career had hit a low,” Kapoor says. People were willing to launch her as an actor, but no one was prepared to make her a producer. And that is when the first milestone of her life crossed her path. “Hum Paanch became a hit and it was my biggest break,” she says.

Kapoor went on to talk about her struggles with her body and how a largely sexist industry treated it. “People went to the extent of saying if you lose weight I will cast you. I felt that was too much of a sacrifice. I realised that acting was not my calling. You don’t need to do things that your father did. The pressure on star kids to become stars is the biggest pressure,” Kapoor confesses.

Kyunki Saas Bhi Kabhi Bahu Thi was the next milestone in her life. It was at this point that success came beckoning to her, perhaps to never leave her side again. “I love my job. Passion is all that matters,” is the power lady’s recipe to success.

“It took a while for me to convince people that I can make a family drama. It was Rajnikanth who helped me in my venture of doing a family drama,” Kapoor reveals.

So I want to tell people that there is no formulae for success. The outcome of your hard work is not in your hands, but the journey is. You constantly need to adapt to new situations,” Kapoor implores.

On the issue of television slowly dying an unfortunate death, the media mogul is rather optimistic. “It can never become redundant because it’s a source of family entertainment,” she says.

Despite her shows having portrayed women in various lights and shades through the years, the question of their undeniable importance as performers and spectators still remains largely unattended in the kind of content created for Indian television even today.

“Half the market remains untapped. Can one undermine the power of Kareena Kapoor? And at the same time, one should not forget the power of our audience,” she says. Kapoor says her belief is to build a company that can create “more Smriti Iranis” in the society.

“That’s how we can promote our women,” the Balaji supremo signs off and smiles at her friend sitting in the audience and cheering for her, as the auditorium breaks into a resounding applause.