At Outlook Speakout 2018, women achievers tell us how they found their voice and their biggest sources of strength. 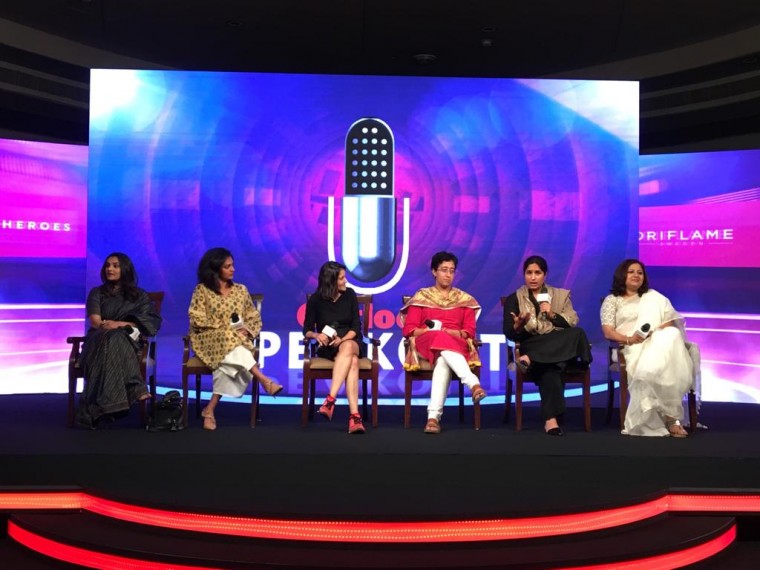 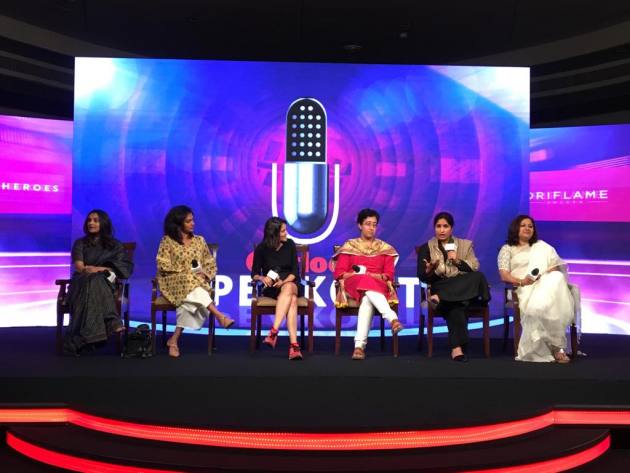 A panel full of powerful women took the mantle to enthrall an audience at the second edition of the Outlook Speakout Conclave and Vinod Mehta Memorial Lecture held in Delhi on September 28.

Moderated by Sairee Chahal, founder and CEO of the online women’s community, Sheroes, the panelists included Parvathy, Malayalam actor and core member of Women in Cinema Collective, Vani Tripathi, actor and board member of the CBFC, Divya Spandana, Kannada actor, former Member of Parliament and the chief of Congress IT Cell, Atishi, leader of the Aam Aadmi Party, and Congress leader and Member of Parliament, Ranjeet Ranjan.

“Bol ke lab azaad hai terey” —Chahal invoked the words of the eternal wordsmith, Faiz Ahmad Faiz, to commence the session that witnessed some of the most inspirational moments.

The moderator started off by asking the achievers as to how they found their voice and their biggest sources of strength.

“From my parents who were the most empowering people in my life,” said Atishi Marlena. For Marlena, who believes she comes from a place of privilege when compared to most others, a story like Renu Khator’s is a source of major inspiration. Ranjeet Ranjan agreed. Ranjan dreamt of playing tennis while growing up, posing in front of the mirror wearing headbands. Coming from a family of six sisters and two brothers, the lawmaker’s family never discriminated between the girls and the boys while bringing them up.

“Recently, I asked my daughter Prakriti as to what she feels the term power means. She looked at me and said that it’s what we feel internally and share with others,” Ranjan said.

However, before the next speaker narrated her story, a lesser known, glorious fact about the MP took everyone by surprise. “Ranjeet ji is perhaps the only MP who comes to the Parliament riding on a Harley Davidson,” Vani Tripathi exclaimed.

For Tripathi, the journey from an academic atmosphere at home, to the theatre, to the screen, and then finally to the “theatre of the absurd” or politics, was a route she barely expected to traverse. “I have also felt a sense of privilege, but I wanted to challenge myself. Every opportunity is a challenge,” Tripathi said.

Parvathy’s trajectory had some similarities and some unexpected curve balls. “I’ve been an actor since the age of seventeen. My career has been driven with the hope of telling stories as it helps me to judge people less,” she said. For her, the challenge was to overcome the fear of fear itself. “We only fear what we don’t understand and I hate to be scared. That is why I keep investigating,” the actor said.

Divya Spandana’s story took her to unexpected quarters. “I never wanted to be an actor or a politician,” she said. But little did she know that her life had everything and more in store for her.

The panelists were then asked about the interesting times the world is going through today, and how the gender lens has changed over time.

Ranjan believes that things are changing for the better as one can see people even sell their land to send their daughters outside their state for education. She also spoke about the importance of one's native language for empowerment. Ranjan emphasised on the power of speaking more openly.

Tripathi added to the discourse by talking about cinema as a tool for change. According to Tripathi, India, which produces the largest number of films in the world, is now seeing a revolution in the world of cinema. “When was the last time you had a film on menstrual hygiene?” she asked, suggesting that more films need to be produced on such subjects.

Parvathy corroborated on the importance of language for empowerment as well as the power of cinema as an agency for change. However, she believes that the Indian cinema industries need to speed up their pace to change the content of the films in order to create some difference. She also stressed on the fact that it is also important to see cinema as a workspace with no gender discrimination. “It is important to set an example,” Parvathy said.

Divya Spandana spoke about how her job at the IT cell for the Congress party is "interesting but challenging" at the same time. “It is a huge task for us to counter fake news. There is a lot of trolling too,” she said. Spandana said her team in the Congress IT Cell largely consists of women and hence it has got a different perspective about the social media space. “I love what I do. No complaints,” Spandana said. As per the actor-turned-politician, social media reflects the kind of society we live in. “We come up with better laws, social media will change as well,” she concluded.

As the session wrapped up, a trail of inspiring words buzzed through the audience that geared up for the remainder of a starry evening.