Our Man In Baghdad

Meet Gen. Jay Garner. If Graham Greene were alive, ironically and tragically, he'd see history playing out his novel in Iraq, not in Havana. 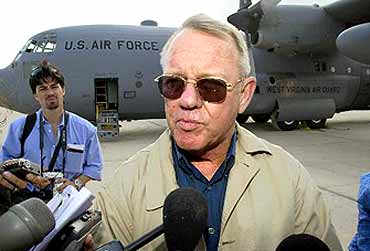 General Jay Garner is "our man in Baghdad." It almost makes me think of that fine, sardonic novel by Graham Greene, Our Man In Havana. The way it's beginning to play out, with Garner in his Dockers, sunglasses and his, "Hi, I'm Jay Garner." and the Iraqi Muslims, in old clothes and often unshaven and tired looking, greeting him with, "Assalamu Alaikum (Peace be upon you)"--it's clear the two are not on the same wave length.

The first thing you want to do when going into a foreign country where you anticipate negative reaction is to at least learn and say one of the more important phrases; in this case, the most important phrase in a Muslim country is, Assalamu Alaikum. This is the universal greeting among Muslims and even among most Arabs. But General Garner was having none of that, or no one told him how important this way--he went in with his Texas twang and American greeting, just as he would in Washington, DC (where he used to love to roam and schmooz with the big boys who talked and even looked a lot like him). But, as I used to tell my clients when I was President of Communications International, Inc., in DC, when in Rome, do and speak as the Romans do--don't be a sore thumb. Nothing ingratiates you to people who speak a foreign tongue, especially if your army has just destroyed their cities and their lives, like speaking to them, at least some key phrases, in their tongue.

The next thing Garner and the American troops did on his arrival was to arrest a prominent Shi'a cleric, Imam Al Fartusi. This was bad enough, but it was compounded by the fact that this is a time of mourning the death of the martyred grandson of the Prophet Mohammed (PBUH), Imam Hussain, and millions of Muslims were coming to Karbala to participate in this ceremony after 25 years of having it denied to them by Saddam Hussein. This caused even more trouble and discontent. Imagine, what would, or could, with the world watching, the American troops do if this large group of Shi'a decided to march on the American positions and not back down. Could the Americans shoot these religious people? I doubt it, unless they also killed all the camera crews and newsmen from all over the globe who were there. The US government and the US military already had been shamed by their killing of journalists in the field and later at the Palestine Hotel and at the Al Jazeera station, so killing the Shi'a and the newsmen was now out of the question.

Fortunately, Imam Al Fartusi was released and the confrontation wound down and the American troops stayed away from the Shi'a in Baghdad, in Karbala and in Najjaf. But the divide of cultures was evident, and as the time goes on, it will be even more evident.

By calling Garner, the Viceroy of Iraq, the Bush team has made another tactical error; this is scoffed at by even Bush's British allies--they know how much trouble that caused them in India, Afghanistan and elsewhere. The other Europeans and the Russians, not to mention the Arab and Muslim nations, see this as an outrageous insult, especially since Bush keeps saying that this is not "occupation" but "liberation" and that it is not "colonialism" but is "democracy." The word Viceroy means that the person represents some kind of royalty. The last time I checked, Bush was still just a president, not a king or even a prince--so why, Viceroy? Of course, the way Bush has been handling things in the US and in the world, he may think he's a king--he certainly feels he has no need to respect either the US Congress, nor does his possible leader, Dick Cheney, and neither respects the UN--in fact, they think it is just an organization that should be brushed aside except when we need them for police actions in Bosnia, Kosovo, Afghanistan and now in Iraq.

From what friends of mine tell me at the State Department, neither our "Viceroy" nor any on his team speaks Arabic, nor do they know much about Islam nor do they care to know about it. I'm sure, just as the characters in Graham Greene's novel, fiction and fact will start to intermix, and it will lead to some serious disasters, to some unwanted and unwarranted deaths and a botched mess before it's over.

This latter point was reinforced today by an attack on those who do understand Iraq, Islam and the Arab World, the US State Department professionals who have served in the Muslim and Arab countries--this attack came at a press conference at the American Enterprise Institute, from the insufferable egotist and philanderer, Newt Gingrich and the morbidly bitter, Charles Krauthammer who both attacked the State Department in favor of the Pentagon know nothings like Garner, Rummy, Wolfowitz, Perle and Feith. If these knowledgeable men in the State Department are not listened to, we will have a terrible fiasco with major blood letting in Iraq--even worse than has already taken place. In fact, it could pull the whole of the Arab and Muslim world into a war against America--a war that I'm sure that even Britain would shy away from.

So there you have it, Gingrich and Krauthammer attacking the State Department, saying, "They will lose the war, the victory the Pentagon has won for us," not realizing that the Pentagon has not won anything more than a battle, the real war will be if America can handle the peace and create harmony in Iraq and in the region. This war can only be won by diplomacy, by men who know how to say and mean, "Assalamu Alaikum," not by men who neither know it or if they do, are ashamed to say it. Unless you can meet a culture on its own terms, you will fail in dealing with that culture--and remember, we are in their country, not in Texas or in Washington, DC at the Pentagon or White House. Viceroy Jay Garner failed on all these counts; obviously, he'd better learn fast or face serious problems in Iraq.

If Graham Greene were alive, ironically and tragically, he'd see history playing out his novel in Iraq, not in Havana.

Sam Hamod is an expert on world affairs, especially the Arab and Muslim worlds, former editor of Third World News (in Wash, DC), a professor at Princeton University, former Director of The National Islamic Center of Washington, DC, an advisor to the US State Department and author of Islam In The World Today.