When the UN SDG Summit was taking place on September 24 and 25, 2019 at the UN headquarters, a parallel People’s Assembly was being held at the UN Church Center 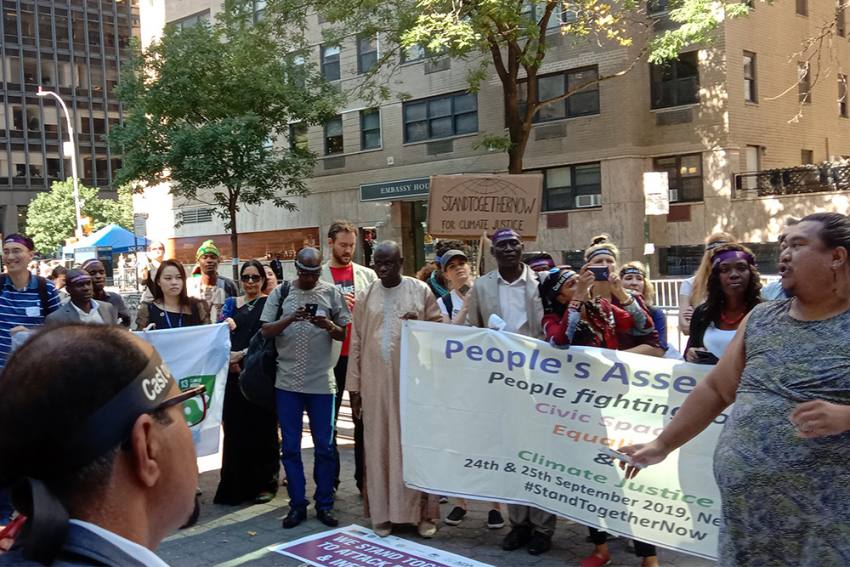 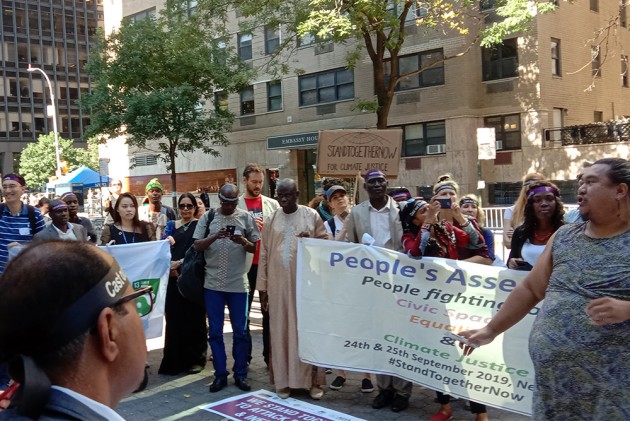 “What do you want? Climate justice. When do you want it? Now. If we don’t get it? Shut it down!”

Around 300 activists from 80 countries, who had gathered in New York to join the People’s Assembly raised such slogans at the Dag Hammarskjold Park in Manhattan.

When the UN SDG Summit (High-Level Political Forum convened under auspices of UN General Assembly) was taking place on September 24 and 25, 2019 at the UN headquarters, New York for quadrennial review of the working of the Sustainable Development Goals (SDGs), a parallel People’s Assembly was being held at the UN Church Center, opposite the UN building. This was organised by the wider civil societies like GCAP, Action4SD, CIVICUS, Action Aid, ADRF, Forus, Women’s Major Group, Global Policy Forum, Trust Africa, FEMNET, SDG Watch Europe and others.

The member nations of the United Nations adopted the framework of Agenda 2030 in September 2015 outlining various developmental goals. For example, SDG 1 promises to end extreme poverty, SDG 2 to end hunger, SDG 10 to reduce inequality, SDG 13 to fight climate change and SDG 16 to promote peaceful societies in the World so on. But what is the situation after four years? In comparison to 2015, there is more hunger; the gap between the rich and poor has widened. The global temperature has risen by 1.1 degree comparison to pre-industrial level, concentration of the greenhouse gases (GHG) reached a new high in 2018; genocide, and attacks on the human rights defenders and the civil society continue unabated.

In the voluntary national reviews (VNR), presented during the High-Level Political Forums (HLPF) in the last four years, most governments have listed their performances on achieving the SDGs and exhibited complacency with the ‘business as usual’ approach. By end of the two-day UN SDG Summit, the World leaders adopted a political declaration that reads “Gearing up for a decade of action and delivery of sustainable development”. This is also nothing other than a mere promise, which is issued during every such meeting.

The Assembly was a gathering of people from civil society organisations and communities from countries like India, China, Russia, Philippines, Ghana, Kenya, Germany, United Kingdom, United States and Argentina etc. Among others, the indigenous communities from Amazon, community discriminated based on work and descent (DWD), termed as Dalits in India and other South Asian countries, and the women with disabilities from Ghana and other African countries participated. The two-day event discussed various ills faced by the world and marginalized and left-behind communities. The public demonstration in the Dag Hammarskjold Park was part of the event.

The gathering was an expression of disenchantment and restlessness by the people at the governments’ misdemeanor of taking them for granted. One can draw a similarity between the People’s Assembly to the World Social Forum, which is held as an anti-thesis to the World Economic Forum.

The Assembly brought forth some glaring facts. Over 730 million people in the world are still living under extreme poverty, 820 million go hungry every day, 1.1 billion do not have access to electricity, 2.7 billion are still without access to clean cooking facilities, and more than 260 million people across the world suffer daily exclusion and discrimination based on work and descent. The Assembly attributed some of these failures to the lopsided global economic system, so also social order.

In one voice, the gathering in the Assembly declared, “We exist in a world of profound inequality, climate emergency, a crisis of human rights and closing civic space and where violence is increasingly protracted and normalized. We live in a world where there is a crisis of accountability and governance. In 2019, at the end of the UNGA Summit, we are saddened by the persisting lack of political will & leadership to even begin to address these issues.  This is not good enough. This is a failure.”

Democracy and human rights have taken a beating in the last years. Across the world, there is a visible rise in the right-wing populists, nationalists and extremist groups, many of who have come to power and using the majority to attack the most vulnerable, who are perennially powerless. Such groups have grossly misused the social media to spread falsehood and create division and hatred between the dominant communities and the minorities.

The argument by some governments in Asia about the initiatives taken to produce renewable energy is belied by the fact that the plans for major coal utilization in South Asia and Southeast Asia alone would upset the Paris agreement targets, according to Climate Analytics. The US has already withdrawn from the Paris Climate deal despite being the second-largest emitter of carbon dioxide. India is the fourth-largest emitter, but its coal import in 2018 was largest in the last four years.

In the coming years, the organizers are pondering to do such assemblies across the world, not just in New York or the national capitals, to unleash the people power and energy, to give it a shape of mass social movement and to force their political representatives to mend their ways of governance and be accountable to global citizens. No wonder, as the governments are failing to act on emergencies, the people are devising ways to protect the planet and drive the globe towards a more egalitarian and sustainable order.