JNU Violence: Feeling Of Resurgence Amid Atmosphere Of Fear

I cannot say that the atmosphere of fear and insecurity has disappeared completely, but there is a feeling of resurgence around us. 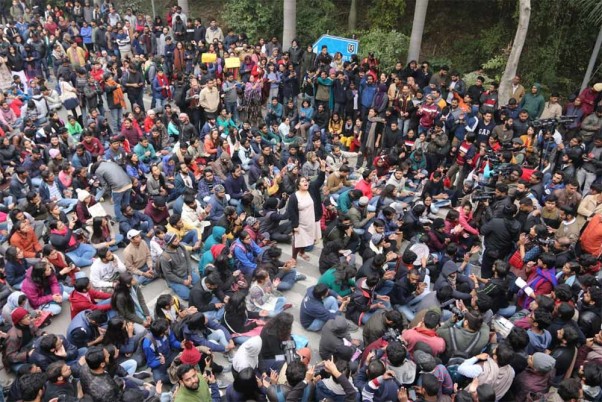 Students of Jawaharlal Nehru University stage a protest in the campus a day after violence in the campus
Photo by Suresh K. Pandey/Outlook
Dr. R. Mahalakshmi 2020-01-07T19:25:08+05:30 JNU Violence: Feeling Of Resurgence Amid Atmosphere Of Fear

On Jan 5, 2020, a Sunday, I received a call around 6 pm. A student was stuck in Periyar hostel, and he said he feared for his security. Two others, who had gone to rescue him, were also stranded in the room, fearing they would invite the blows of masked mob roaming outside the hostel. They could spot them from the balcony.

I rushed off, briefly contemplating whether I should change into a saree, since that would accord me instant recognition of being a faculty member. But then I realised this student had called me at least four times earlier, and I had missed it somehow. I rushed out in my pants and jacket, just about remembering to take my phone along. As I drove towards the hostel, I noticed a lot of distress -- people rushing away from the centre of the campus and moving towards the east and west gates, some huddling in small groups on the road talking agitatedly. As I moved towards what was an uncannily quiet hostel area behind Godavari hostel, I saw a small group of students was approaching me. I got out of my car to talk to them. Two were known to me, and they looked petrified. When I told them I was going to Periyar to rescue my students, they begged me to stay away. They said they had just seen a student on a bike being hit; though he had managed to run away, his bike lay mangled. Cars were being pelted with stones and lathis.

Soon after they left, I could hear screams in the distance, and just then my phone rang. A female voice, which I could not recognise immediately, was asking me to rush to Sabarmati hostel. “We are being attacked ma’am, please come and help us.” I turned my car around, and went back towards the main road, moving in the opposite direction towards the Sabarmati T-point.

I had barely moved into the road when I saw a number of people rushing towards me. Upon asking some young men about what was the commotion about, they said there were people with rods and lathis on the rampage in the Sabarmati dhaba area. When I started my car again, they asked me not to go forward as even teachers were not being spared. I was almost going to ignore them, when a car moving at great speed, slowed down to where I had stopped. I saw my colleague, Prof. Atul Sood, looking dazed, drops of blood on his hands, the windscreen shattered but not fallen, and rear windshield missing. I called out to him, but he appeared dazed and sped off again.

I intended to rush behind him when I saw another colleague. I asked him to hop in and dropped him off at a safe point. In the meantime, I reached out to my husband, and he asked me to rush to a point outside JNU, where he was waiting with my students from Periyar hostel.

I rushed there, brought them all home, began charging my phone –- and the calls wouldn’t stop. Students asking for help, friends asking if we needed shelter, desperate pleas on WhatsApp, news and photos of injured colleagues. My neighbour came over to tell me a student had come looking for me – she left her hostel and crossed a rough path in the jungle to evade the goons. As she couldn’t find my home, she went to my neighbour’s house, who fortunately were good souls and gave her shelter. As I was speaking to our neighbours, we saw groups of people huddling near our homes – girls trying to book cabs, contact family members, find shelter outside. We asked if anyone would like to come in and eat something. As I was re-entering my gate, I saw groups of men standing outside, who didn’t look to me as JNU students. The minute I asked them who they were, they walked away. I rustled up tea and snacks for the traumatized rescued men, and then rushed with them to the JNU north gate, where a press conference had been called by JNUTA.

A group of colleagues was already there, gates were barricaded, a row of policemen on either side and media persons trying to put their mics through the bars, asking us for the sequence of events. JNUTA leadership was repeatedly asking the cops, who were in command, that why were the media not being let in. We were not very clear about how many of our students were hurt, if all our students had been rescued from the places where they had fled to in fear, whether the goons were still roaming around. The horrifying images of Aishe Ghosh, the president of the JNU Students’ Union, bleeding profusely from the wound on her head, and our dear colleague Prof. Sucharita Sen with her head bandaged and swollen face, and reports about other injured colleagues and students, were enough to tear us up. Hearing news about anti-social elements outside the AIIMS trauma centre, trying to intimidate people gathered there, was distressing to say the least.

We were being heckled by an increasingly unruly crowd gathering outside the gate, who had pushed public figures and threatening us with ‘desh ke gaddaron ko goli maro...’ slogans. The police remained a mute spectator.

Despite this, or maybe because of it, one thing that we were positive about was that we were not going to cede our campus to these lumpen elements. And we were not giving in to the police, who were asking us to disperse. We stood our ground, gave our comments and answers to media, narrated the horror that had struck the campus. Gradually, more and more colleagues joined us. We soon heard that the JNUSU had raised a call for all students to gather at the place where it all started – the Sabarmati T-point.

The next hour suddenly saw our gloom descending – friends, colleagues, and students from different parts of the city started converging on campus, and finally managed to drown out the war cries of those wishing our annihilation. Beautiful slogans -- of hope, resistance and victory — filled the air. The police finally decided to enter the campus. It was a flag march to restore normalcy!

Some of our colleagues also set off behind them towards the students, ready to step in, in case the police decided to suddenly disperse the peaceful gathering at Sabarmati. Solidarity and strength were in the air – the fear was evaporating. Students and faculty began marching back to the gate, the gates were opened and the sea of humanity that flowed in filled one with optimism. The stories of fear, horror and despair we got to hear, as more and more people mustered the courage to speak up, deepened our resolve to not surrender to the violence sought to be imprinted on our minds.

Many of us got home in the wee hours, hoping the new day will bring us better tidings, that our injured friends would return home on the path to recovery, and that we could begin the business of removing the vestiges of the violent vandalism of the previous night.

I cannot say that the atmosphere of fear and insecurity has disappeared completely, I have seen many students leaving hostels with their belongings – but there is a feeling of resurgence around us. And in the meantime, we are hearing that our brazen Vice-Chancellor, who did not even have the courtesy to come out in public to address the faculty and students on Sunday, held interviews for faculty positions on Monday. Obviously, this is a testimony to the impunity he enjoys under the present political regime in the country.