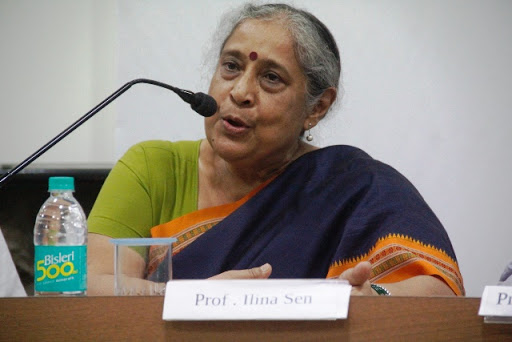 I opened my Facebook and saw Professor Ilina Sen’s photograph. Then I hoped against the anticipations. But soon the harsh reality dawned. Ilina Sen, an author, social activist, a feminist scholar and former president of IAWS had died. Though I knew she was very ill, I lived in hope.

Ilina Sen, who spent many years in Chhattisgarh working with a trade union of underprivileged mine workers, died of a terminal illness on Sunday, August 9 at the age of 69. She leaves behind her husband, Dr. Binayak Sen, two daughters and her mother. The news of her death made me numb.

I met Ilina for the first time in 2008 at an Indian Association For Women Studies meeting. I was curious as I had heard so much about her. It did not take us much time to connect. We spent six years together as executive members of IAWS. I was particularly drawn to her during a national conference venue in Wardha, where she was teaching. The precision with which she set up the guesthouse indicated that she thought about each one of us. A ramp was there for my wheelchair, even a chair was placed in the bathroom. Her sensitivity and her affection lead to a long-lasting friendship.

Ilina had an unbelievably astute and gifted mind that could carry on a nuanced analysis of any constituency of class, caste, and gender, and in my case, also disability -- something I find rare.

It was also the time she was fighting for justice for Dr. Binayak Sen. She was determined yet vulnerable. As we went through this, I understood her pain and struggle. But she never lost her determination. Though she was distressed by the negation of justice and the tirades in the case, she never lost her firm understanding that she had to confront the state.

I recall when she became uncertain and was sad about the possibility of getting Dr. Binayak out, she would be dejected, but only for a brief time. She would then pull herself out of despondency and fight on. And Binayak did find himself out of prison. While she did want Binayak to get justice and join the fragmented family, her goals were much broader as she was passionate about enriching the lives of sections that are relegated to the margins.

When I came to know about her illness, I was upset. As a survivor I know what it entails.

"You do not have to love me so much to embrace even my disease," I told her when I learned about her illness.

She laughed and said, “Anita, I know you are upset but your love will help me survive.” We both discussed the notion of body as she said, “If you love, any questions of what is your own, and what is not your own, will dissolve.”

Through all the fights that she had to go through, Ilina showed immense courage, resilience and fortitude.

Her mesmerizing memoir illuminates her journey and how her world collapsed. Such a journey can devastate any human being, yet as an activist and academician, she never gave up working on social issues, particularly for the rights of workers in the mines of Chhattisgarh and for the tribals and Adivasis of the region.

Her memoir takes me back to the constitution of Chhattisgarh Mines Shramik Sangathan (CMSS), where Dr. Binayak Sen and Ilina with three doctors started Shaheed Hospital of the CMSS to provide healthcare for the mine labourers.

It was based on the collection of these experiences that both Binayak and Ilina created Rupantar, their own NGO. Rupantar became a role model of alternative healthcare, education, gender issues, as well as agro biodiversity in remote areas.

Three books -- Inside Chhattisgarh: A Political Memoir, Sukhvasin; The Migrant Woman of Chhattisgarh; and The Space Within the Struggle are a reflection of her interpretation in which she encouraged the Dalit and tribal people to struggle and fight for their rights in Chhattisgarh and to liberate themselves from corporate monopoly and exploitation by the Salwa Judum. In the third book published by Zubaan, Ilina wrote about several women in social movements and how they interrogated patriarchy within themselves.

Ilia’s life’s trajectory shifted in 2009. People who were keen to understand Chhattisgarh would think of Ilina as an expert who had a crystal clear understanding of the subjugation of people in Chhattisgarh.

In 2009, she saw the exploitive face of the state in close quarters. It was at this time that she went back to academics. She taught at the Mahatma Gandhi Antarrashtriya Hindi Vishwavidyalaya in Wardha, Maharashtra and later moved to Mumbai to join the Advanced Centre for Women’s Studies at the Tata Institute of Social Sciences.

I will never forget the incident of the Wardha conference. On 24 January 2011, as Ilina was returning from Bilaspur after the high court hearing, she received news that an FIR had been filed against her in Wardha under the Foreigners Act. The FIR was for the non-registration with the local police of international delegates who were to attend a conference under the auspices of the Indian Association for Women’s Studies (IAWS), of which she was the local convener. Despite the clearances, the case was just to make her life more difficult. However, the case was closed and she heaved a sigh of relief.

My admiration for her reached the zenith when she welcomed the participants to a pre-conference workshop on disability. She was not keeping too well then, but she drew upon her personal experience, to articulate the fact that disability is not only a problem with reference to an individual. There is a need to contextualise disability in the larger structures and the environment. In ‘a society that specialises in exclusion’, she talked about the need to redefine the “normal”.

I was in fact taken aback when in our personal conversations, she mentioned that she really wanted to do a lot of work on mental health. I recall that she would say, “Disability of the body… much less Anita, much less as compared to mental illness. She felt that physical disability is clearly visible. 'Mental illness’, however, was more difficult to understand.

We have lost a gem who confronted oppression in every possible way. We have also lost a great humanist.

My personal loss too is immense, but I do feel that she would always be alive in her legacy of writing and of groundbreaking work. She will continue to make a difference to the people not only in Chhattisgarh but also among all marginalised sections.

How can I ever forget how at the end of her presidential address of the IAWS, she sang ‘Bread and Roses’.

For those who don't know the song, it is a political slogan, created from a speech by American Women's Suffrage Association.

Ilina, you will continue to remind us of Bread and Roses.

(The author is Professor in School of Human Studies, Ambedkar University.)

‘Sometimes We Have To Be Tolerant’: Ashok Gehlot To MLAs As Sachin Pilot Returns