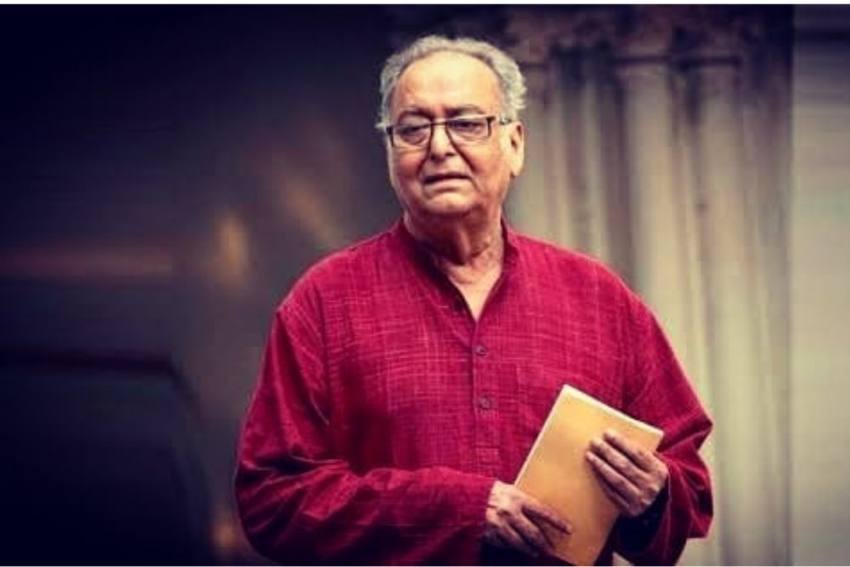 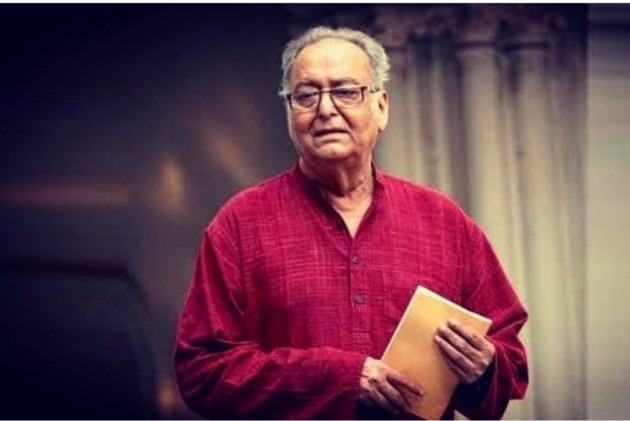 For a long time the talk has been gloomy – Covid, getting better, getting worse, debates on chances. All the talk that surrounds those stricken by the virus. My meetings with Soumitra Da have mainly been in public with few chances for conversation barring the usual ‘kaemon acheyn’? Once most memorably, at Rituparno’s house 8 years ago on my friend’s passing. I had heard that Soumitra Da had cancer but nonetheless he was there and we exchanged glances without really knowing what to say – someone much younger had left well before his time. Soumitra Da was then nudging 80 and mortality must have hurt. Then there were meetings at book launches where we had both been invited and he greeted me with his characteristic smile and made space for me to sit down, though whether he remembered me was debatable. Nor was it fair to expect it from him in the middle of all his assignments and the stress of his life.

Beneath the blaze of spotlights, the news had been bad for quite a while – his own health, then his grandson’s accident which set him taking on all kinds of work both in advertising and films when one would have expected him to sit back, relax and make the occasional appearance in a signature art film or onstage in a play he loved or just concentrate on writing the way a Bengali bhadrolok in the autumn of his years does. There was no way that I could check the accuracy of these rumours – they came to me filtered through the Tollywood crowd. However, since his work combed everything from ghost stories to the hard core commercial, perhaps there was a whisper of truth to them.

Ultimately I found myself wondering who would replace him in on the screen when the inevitable time of his passing came about. That dandelion lock of hair, a gentle wistful presence who had once declared that ‘if I stop acting, I won’t exist’, with an undercurrent of strength that only came to the fore at times when he confessed to having kicked a drunk Ritwik Ghatak in the pants. There was really no one of his age and seniority – except perhaps for Barun Chanda who had a different kind of persona altogether. Both had acted for Satyajit Ray but Soumitra Da was the foundation of his films – the quintessential Apu and the Felu Da who fought Madanji Meghraj with the weapons of his mind. For me, Soumitra Da was always Felu Da because I watched those films over and over again. No one would have imagined him to be an action hero except the creator of those stories and sadly, when he was no longer able to play Felu Da, the films lost much of their fascination.

I saw him in Raja Lear, queuing up for tickets in Rabindra Sadan’s hole in the wall counter at a time long before social distancing. His Lear was the quintessential zamindar checkmated by a family out of a soap opera. Shakespeare would possibly have cast him differently but as the aged, ranting Lear, he was broken hearted and unforgettable. Theatre, he always said, was his first love, and even though he claimed to be a cinema addict, he rather turned up his nose at film until Apur Sansar broke through the barrier in 1958. Despite being Ray’s alter ego, for 20 years Soumitra Da’s career ran parallel to that of Uttam Kumar, Bengal’s Mahanayak, and there was fierce competition between the two, though since Soumitra Da was always the thinking person’s actor while Uttam Kumar remained the matinee idol, I wondered how any real conflict had been possible. “Tui bhishon naive, Dasu,” Rituparno said when I asked him, and possibly I was when it came to tussles between titans.

There was about Soumitra Da a genuine lack of ego which was surprising when you considered his almost divine status in Bengal – he put it down to the fact that his wife was his severest critic and she would never allow him to be bombastic. In rehearsals he had been known to burst into snatches of impromptu song or sit in front of his mirror and subject it to a tirade on the shortcomings of his face which he said had tired audiences long enough.

Which brings me back to that question - who will replace that face? Or is that question irrelevant in a time of empty auditoriums and PPE clad shoots? Ironically one of the Covid detection tests is called Felu Da. He would perhaps have laughed at that.

(Anjana Basu is a Kolkata-based author and columnist. Views expressed are personal)