On Tuesday, when Kejriwal took to the stage to deliver his victory speech, he thanked -- besides the Delhi voter -- 'Hanuman' and led the 'Bharat Mata Ki Jai' slogans, another sign of how comfortably he has subsumed nationalism into his model of development. 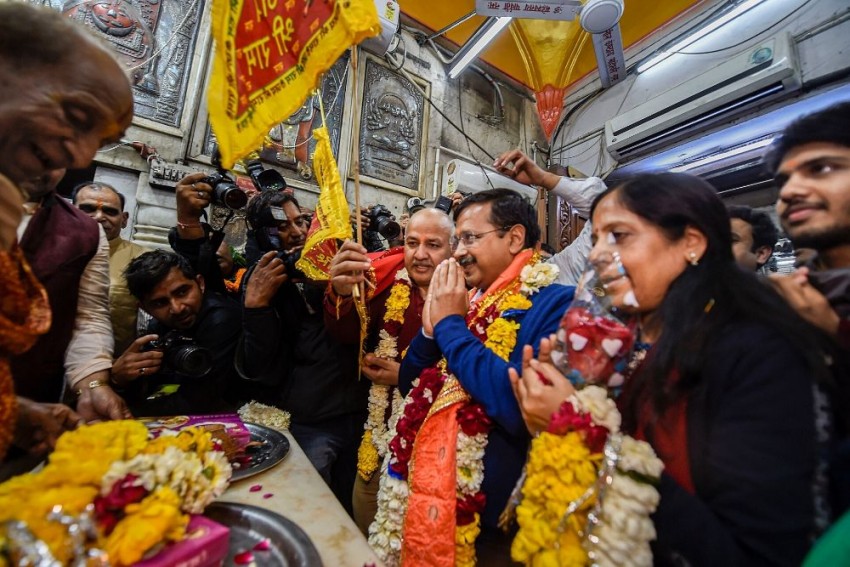 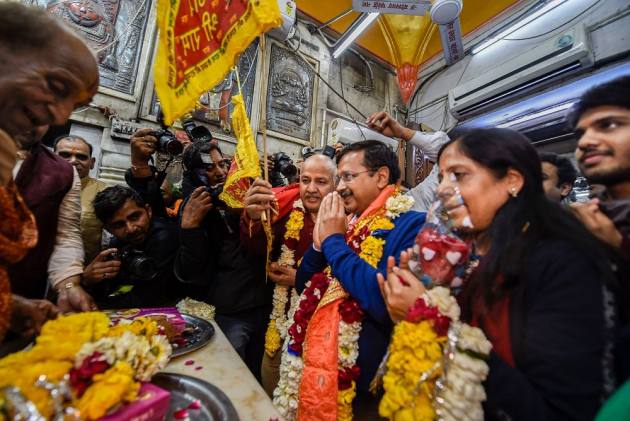 On February 3, five days before the national capital went to polls in what was one of the most bitterly fought battles, the Aam Aadmi Party released a video with Delhi Chief Minister Arvind Kejriwal addressing the supporters of the rival Bharatiya Janata Party (BJP).

"Are you a BJP supporter," he asks, "Don't worry, I am not asking you to leave your party, but I have one request: please vote for broom in this election." The reason? Kejriwal, then, stressed that what his party had accomplished in the areas of education and healthcare would go in vain if they weren't voted back to power.

It was no ordinary election, and AAP's political messaging was clear right from the beginning. For instance, one of the catchphrases on thousands of billboards in Delhi read: "Dilli mein toh Kejriwal hi."

Interestingly, that's a line picked from what the BJP and Narendra Modi supporters in Delhi have said over the past five years. While reporting during the run-up to elections, we met a group of six women in New Delhi, the constituency of Arvind Kejriwal. "I love Modiji," said a woman and added, "but in Delhi, we want Kejriwal." Five others giggled sheepishly, perhaps their way of expressing "love" for "Modiji" but "wanting Kejriwal in Delhi".

Coming back to elections, AAP was up against a behemoth like the BJP and that too under the leadership of Prime Minister Narendra Modi and Home Minister Amit Shah.

And therefore, the victory -- and the scale of it -- is extraordinary. The saffron party pulled out all stops making it a never-seen-before contest for the Delhi Assembly. It parachuted 40 star campaigners, including PM Modi, Amit Shah, J.P.Nadda, and UP CM Yogi Adityanath, into the national capital and focussed on what they referred to as the "issues of national significance".

Kejriwal, however, trumped them. One of the primary reasons why Kejriwal and AAP could repeat their 2015 heroics was their stand on what the BJP made the mainstay of their election campaign.

Sample this: on August 5, the Centre abrogated Article 370, which granted special status to Jammu and Kashmir, a step BJP took for the "nation". Guess who was the first prominent leader to back Centre's move? Kejriwal.

“We support the government on its decisions on J&K. We hope this will bring peace and development in the state,” the Delhi CM tweeted soon after Home Minister Amit Shah moved the resolution.

As the poll date drew closer, Shaheen Bagh -- where the protest against the Citizenship Amendment Act and proposed National Register of Citizens has been on for two months -- became the centre point of BJP's campaign. The saffron party tried to corner AAP after deputy CM Manish Sisodia had already declared that AAP stood by the people of Shaheen Bagh.

Days later, when Arvind Kejriwal was asked, in interview after interview, about his stand on Shaheen Bagh demonstration, he cleared the air, saying everyone had the "right to protest" but they shouldn't cause "inconvenience" to the public.

In an interview, Kejriwal told NDTV if Delhi Police were under his control, he would have cleared “the Shaheen Bagh area in two hours.” In clear terms, irrespective of how serious he was, Kejriwal sent a message to those opposing the anti-CAA stir near Kalindi Kunj. He neutralised Shah and BJP's attack in one stroke, dropping hints to the Delhi voter that he would want to rid them of "inconvenience"  but BJP had kept him hamstrung.

That wasn't it. Just days before the voting, Delhi chief minister sat down with another TV journalist, who asked him if he knew Hanuman Chalisa. Kejriwal pounced on the opportunity, picked a glass of water, gargled and recited Hanuman Chalisa, thereby establishing himself as a "kattar Hanuman Bhakt", a term he used later to describe himself.

On Tuesday, when Kejriwal took to the stage to deliver his victory speech, he thanked -- besides the Delhi voter -- "Hanuman" and led the "Bharat Mata Ki Jai" slogans, another sign of how comfortably he has subsumed nationalism into his model of development. Not to forget he attributed AAP's massive win to "Bharat Mata".

Following AAP's stellar victory, many in the political and journalistic corridors wondered if it was a victory of development over hate and polarisation -- a very simplified and myopic assessment of the latest political developments in the national capital. Perhaps, a closer look would reveal: it's a victory for Kejriwal's development, embellished with support to BJP on "issues of national significance", and his visible Hinduness.