'Olympic Games Do Not Belong To China'

'When I do run with the torch on the 17th of April it is not in support of China. In fact it will be with a prayer in my heart for the people of Tibet, and indeed for all people across the world who are victims of human rights violations' 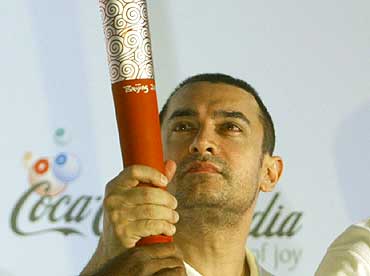 Footballer Baichung Bhutia has decided not to carry the Olympic torch, much to the discomfiture of many in the CPM, including West Bengal sports minister Subhas Chakraborty: "Bhaichung shouldn't have done it. It's embarrassing." Embarrassing for whom precisely, though, remains unclear. Meanwhile, Priya Ranjan Dasmunsi, the I&B minister, who is also the president of the All India Football Federation has come out in support of Baichung Bhutia's decision, calling it "purely an expression of his fundamental right and his own decision;" Actor Aamir Khan explains his decision to carry the torch -- from the actor's blog

Over the last few days I have received several requests not to participate in the Olympic Torch Relay. Requests through members of my family, personal friends, people who are associated with the Tibetan struggle, and my blog. I have gone through and read each and every letter, message and post pertaining to this issue.

I would like to state that I have the highest regard and respect for the struggle that the people of Tibet are going through. I completely empathize with them. Similarly, I have the highest respect and regard for the struggle that the people of Iraq, Kashmiri Pundits who have been displaced, Kashmiris in general, and the people of Palestine, are going through. I have named above just a few instances of human rights violations. Across the world, and indeed within our own country too, there are several instances and examples of atrocities and human rights violation, which are still continuing. I categorically state that I am absolutely against any form of violence, and certainly I am deeply upset whenever the basic rights of human beings are violated anywhere in the world.

However, I feel that the Olympic Games do not belong to China.

In fact if we were to try and find on this planet a place to hold the Olympic Games where the government of that place has not been responsible for human rights violations (in one way or the other), then I suspect that we would be left with very few options, if any at all. If I am not mistaken almost all societies have been responsible for human rights violation either directly or indirectly, sometimes in seen ways and sometimes in unseen ways, sometimes physically, sometimes economically.

The Olympic Games represent for me the coming together of different people across the world despite their differences and difficulties. It is an opportunity for sportsmen and women across the world to showcase their talent, to challenge themselves and others, and for others to watch and marvel at the achievements of the human body, mind and soul.

Are human rights violations continuing across the globe while all this is happening. I'm afraid so. And I hope and pray for the day that we can one day live in absolute peace and harmony, where human suffering is done away with.

I am no one to tell any group of people how they should conduct their struggle. I am not part of it and am not going through what they are going through. But my heart goes out to them.

I request those of you who have asked me to stay away from the Olympic Torch Relay to understand that when I do run with the torch on the 17th of April it is not in support of China. In fact it will be with a prayer in my heart for the people of Tibet, and indeed for all people across the world who are victims of human rights violations.