Candid dialogue is needed as India and the US deal with a rising China, diplomacy with Pakistan and challenges posed by Iran. Differences in knee-jerk reactions demand extra effort from both countries to understand each other's sensitivities. 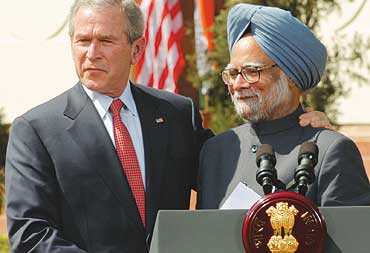 The continuing uncertainty over the implementation of the historic civil-nuclear cooperation agreement between India and the US casts a pall over a fledgling strategic relationship between the world’s two largest democracies. It was India’s nuclear weapons test in 1998 that thrust India into the US strategic agenda and started a dialogue that has blossomed into a closer relationship. It would be ironic if disagreement over the implementation of the treaty now set back relations.

Since the early 1990s, the center of gravity in US foreign and security policy shifted from Europe to Asia, especially with the rise of Chinese power. The values-based partnership between India and the US is derived from the increasing importance of Asia and a convergence of interests that took shape in the decade after the collapse of the Soviet Union.

India’s world-view after it became independent in 1947 was shaped by its anti-colonial history, nonalignment between the world’s two major blocs, determination to remain preeminent in its immediate neighborhood, and poverty, which in practice limited India’s international impact.

India today sees itself as a major regional power on its way to becoming a major world power and the US as the key external friend who can help it realize its global ambitions. Economics – expanding India’s trade and investment and securing its energy supplies – has become a major driver of its foreign policy. Over the past 15 years, the change in both tone and substance of US-India relations has been revolutionary.

With such common interests, it is a priority for both the US and India that Asia develop in peace and that no single power dominate the continent. Though this argument is seldom articulated by either government, India and the US have quietly worked to integrate Asia politically and economically. Both obviously think of China in this context, but neither is interested in creating an anti-Chinese alliance: For both, the objective is to encourage peaceful relations between China and the rest of the region.

Historically, the US and India had radically different perspectives on security. The US opposed India’s nuclear policy, especially after the 1998 test of an explicitly military nuclear device. India saw the Indian Ocean as its own "security space," and looked with a jaundiced eye on other powers, including the US, maintaining a regular military presence there.

Ironically, the nuclear test provided the occasion for India and the US to have their first serious discussion about respective strategic perspectives and what would make the world a safer place. This dialogue ultimately did not change either country’s fundamental approach to nuclear proliferation. But it did lead the US to accept that it must deal with India as a nuclear power.

It also led both countries to recognize a common interest in preventing the spread of nuclear-weapons technology. The test set the stage for changes during the 21st century: the simplification of US procedures for exports of non-nuclear high technology that India wanted to buy and the agreement making possible India-US civil-nuclear cooperation, which had been off limits for nearly 30 years. The US Congress passed legislation authorizing the agreement, and the understanding now makes its way through a multi-layered implementation process.

This agreement has caused heartburn both in the US and India and, if implemented, will lead to major adjustments in the nonproliferation institutions that the US painstakingly built over the last 40 years.

Still, the agreement should be supported for two reasons: First, removing India from the list of "nuclear outlaws" is an essential step in securing India’s energetic participation in preventing the spread of nuclear-weapons technology. Second, the US could not have developed a real partnership with India – one that could stabilize Asia and strengthen the region’s democratic orientation – without breaking the nuclear taboo.

Indian objections to the nuclear agreement stem from political opposition of "left parties," allied with the government but historically suspicious of the US, as well as the nuclear-power establishment, who reject any constraints on India’s freedom of action on the nuclear front.

Ironically, one of the strong foundations of the US-India partnership – their adherence to a democratic system – also brought complications, none clearer than in the implementation process of the nuclear agreement. Neither nation understands the workings of the other’s institutions particularly well. The US is caught off balance by vehement debate in India’s parliament. The separation of powers under the US Constitution, not to speak of the dynamics of divided government, is equally mysterious to Indian politicians. There was ample opportunity to observe this when Congress considered the nuclear legislation: The Indian government and India’s op-ed writers grappled with the fact that a Republican president could not simply invoke parliamentary discipline and convince congressional Republicans to pass the legislation as the White House wanted it written.

Both nations have different views about how their common democratic heritage should affect foreign policy. For Americans, it is natural to want to advance democracy. For India, however, democracy is not necessarily a product suitable for export. Democratic institutions are a source of great pride, deeply ingrained in how Indian government, politics and society work, yet one aspect of India’s anti-colonial history that remains strong is its passionate commitment to maintaining and respecting national sovereignty. India not only resists external interference, but is reluctant to make a public issue of other countries’ systems of government.

Still, after decades of little common ground on security issues, India and the US have begun to develop military-to-military relations that are routine with other countries. They signed framework agreements on defense relations in 1995 and 2005. They regularly carry out military exercises of increasing complexity. India’s military-supply arrangements are also shifting: Israel is now its second largest foreign supplier, and US suppliers bid to supply combat aircraft and other major military systems.

The US and India have plenty of work to do expanding trade and ensuring security cooperation, as well as implementing agreements on high-technology and civil-nuclear cooperation. Both nations need to develop the institutions to integrate Asia and the world. Candid dialogue is needed as both deal with a rising China, diplomacy with Pakistan and challenges posed by Iran. Differences in knee-jerk reactions demand extra effort from both countries to understand each other’s sensitivities.

Meanwhile, the two societies are likely to become increasingly interconnected, with more business ties and student exchanges. This connectedness and a common commitment to democracy will become a force multiplier. This may not create foreign policy, but makes the climate in which policy is made.

Teresita Schaffer is director for the South Asia Program with the Center for Strategic and International Studies. She is the former US deputy assistant secretary of state for South Asia and former ambassador to Sri Lanka. Rights: © 2007 Yale Center for the Study of Globalization. YaleGlobal Online