No Hope In The Dark World Of Insha

The story of the 14-year-old Kashmiri girl, one among many, whose life changed forever after she was hit by a barrage of pellets fired by security forces. 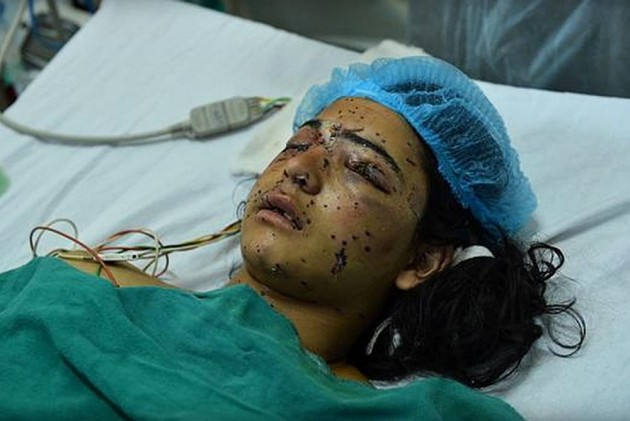 "Mein gase panun gaash wapas (I want my vision back)" says 14- year-old Insha Mushtaq Lone sitting in the house of a relative at Dangarpora hamlet here, away from her home.

On the evening of July 11, three days after the killing of Hizbul Mujahideen commander, Burhan Muzaffer Wani in a gunfight with police at Kokernag village of neighboring Anantnag district, Insha heard a noise outside her house. The inquisitive teenager opened the window of her kitchen facing the street outside.

While pulling the panels inward, she heard an explosion. The next moment, she closed her eyes and gave a loud cry of pain, as blood oozed out from dozens of small wounds on her face. And darkness overtook the teenager.

Since then darkness has pervaded her life. Within a fraction of a second of her opening the window, she was hit by a barrage of pellets fired by a policeman using a pump action gun.

Her family took her to a nearby medical facility, where she was declared injured critically. A doctor at the district hospital Shopian, around 60 km south of Srinagar, was horrified to see her. He could not do anything other than referring her to a Srinagar hospital for specialized treatment. The pellets had ruptured her right eye, perforated through her left eye, fractured her nasal, frontal, and maxillary bones. Three of her teeth had fallen in the kitchen.

At the Sheri Maharaja Hari Singh (SMHS) hospital of Government Medical College Srinagar, she was put in the intensive care unit (ICU) and within days her pelleted face became the face of all pellet hit victims of Kashmir.

According to the health department of Kashmir, around 10,000 people were wounded in the protests that erupted after Wani's killing. Of the 10,000 wounded, 6,205 persons were hit by the pellets during the turbulent summer and 1,100 have pellet wounds in their eyes. "Those who were hit by pellets in their eye have lost their vision. Now you cannot hide behind a jargon of what percentage of vision one has," says a senior doctor in the SMHS hospital pleading anonymity. "All those who have pellets in the eyes are visually impaired."

As the demands for a ban on pump action guns, commonly called pellet guns, grew, the security agencies described the pump action guns as the only viable "non-lethal weapon" to tackle the stone-throwing protesters. Responding to the PIL of the Kashmir Bar Association which was seeking ban on pellet guns, the CRPF told the J&K High Court on August 17 that 3,765 cartridges of 9-number have been fired from the pump action guns since the July 8. With each cartridge containing 450 metallic balls, the CRPF have used 1.3 million pellets on protesters till August 11. Jammu and Kashmir Police is not disclosing the exact number of pellets it has used. At least six persons have been killed in the pellet firing.

Now an unofficial delegation led by former foreign Minister Yashwant Sinha which met separatists on October 25, in its recommendations has called for setting up of a blind school in Srinagar for youngsters blinded by the pellets.

Though the Union Home Minister Rajnath Singh during his September visit to Kashmir had said a committee was formed to look for an alternative to the pellets, its usage goes on uninterrupted.

On October 31, seven people including three young girls were brought to the SMHS hospital after their faces were hit by the pellets. Hailing from south Kashmir district of Pulwama, the security forces fired on protests during a cordon wounding several people including the girls. Pellets have left 13-year-old Ifrah Shakoor, and two others — a 16-year-old and an 18-year-old, both named Shabroza — partially blinded. Superintendent of Police at Pulwama Rayees Ahmad said using pellets has become necessary. "Crowds in villages come very close to the security forces and the pellet gun is only non-lethal weapon which stops killings," Ahmad said. In the first three days after Wani's killing, the officer said, 31 Molotov cocktails were thrown towards the police in Pulwama.

In July Insha's badly injured face outraged Kashmiris forcing the Peoples Democratic Party-led government to step in. The cornered Chief Minister Mehbooba Mufti promised all help to her. After a month-long stay at SMHS hospital, Insha was shifted to AIIMS in New Delhi. She remained in AIIMS for about two months. During her stay at AIIMS, Mufti visited her once.

"She told me that she will donate her own eyes if that will cure me. In reply I told her, Chief Minister, you can't do that," Insha said with bitterness in her voice. "I only asked her to help me to restore my vision."

On September 13, Insha was taken to Adiya Joyti Eye Hospital Mumbai where Dr S Natrajan, treated her. Dr Natrajan, who is the Director of Aditya Jyoti Mumbai and also President of Ocular Trauma Society of India, visited Kashmir thrice since July and operated on the eyes of over 200 pellet hit victims. Following days of treatment, Natrajan said Insha has no perception of light, which means she has turned blind. 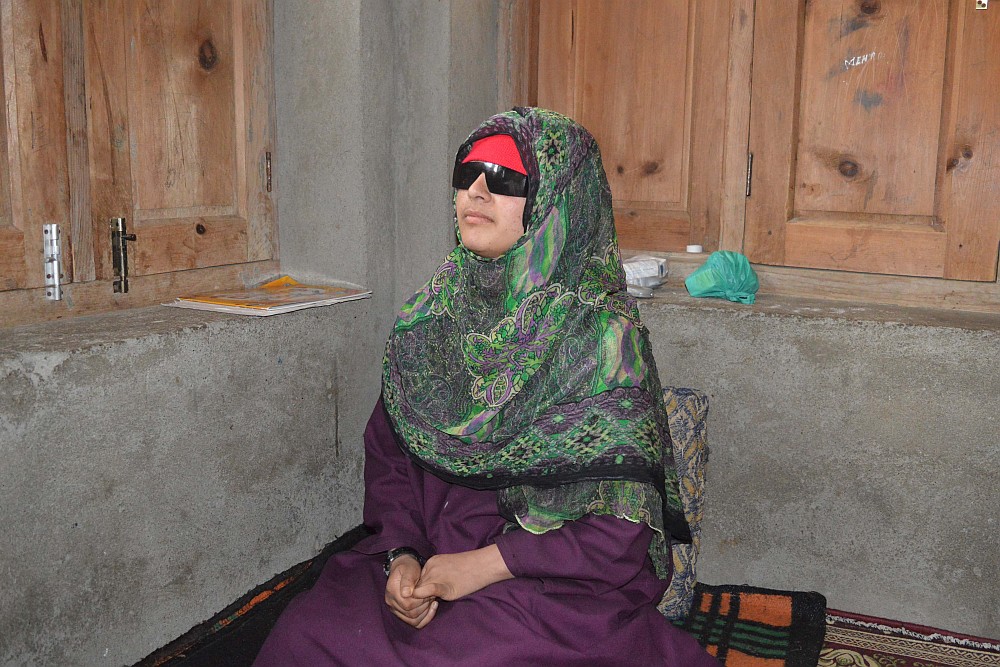 Dejected, the family of Insha returned to their home at Sedav in the first week of October. For few days Insha stayed calm but then she grew restless.

"She wanted to runaway from here. She says she will not live here," her mother Afrooza Bano told Outlook.

Insha's restlessness creates panic in Bano who tries to console her, though with little success.

"She wouldn't talk much earlier but these days she seldom keeps quiet," Bano said as she breaks into sobs. "She asks for her school bag. I have hid it in a cupboard. What will she do with her books now."

Sedav is a picturesque village in the vicinity of Hirpura wildlife area. Locals said the area had some presence of militants in the early nineties, however, it has remained peaceful all these years. "Not a single encounter has taken place in the village. And no protests were seen here," said Insha's father, Mushtaq Ahmad Lone. However, after Burhan's killing when the Valley rose in protest, people here also took to roads to participate in street protests.

The village boys have painted stones, electric polls, and sign boards with green and a white crescent, the colours of Pakistani flag.

Struggling to help his daughter regain her lost eyesight, Lone seems to be a tired man. Lone has lost faith in the system. He says he has neither filed a police case nor approached any court of law for justice in his daughter's case.

Since July 11, he is with his daughter, giving her false hopes and encouraging her to live for the day when she will be able to see the world again.

"Will I take care of my daughter or fight a legal battle," Lone asks. Lone says his daughter needs help at every step of life now.

Lone was working as a driver and part-time farmer. Last year he fell from a tree and fractured his leg. Following the accident, he quit driving and started tending to his own apple orchard to earn for his family.

Lone's was a happy family with daughter Insha and two sons — Nafee Lone (9) and Sajjad Lone (8). However, after Insha's incident everything has changed.

Now Insha often goes to live with their relatives in another village — Dangarpora hamlet, 6 km from Sedav.

A huge signboard at the village entrance reads — Azad Jammu and Kashmir, again painted in green and bearing the white crescent. Here Insha puts up with her aunt and uncle. Supported by her uncle, Mohammad Amin, to walk, she says she doesn't want to return to her village. "It has given me this darkness. I feel pained there," Insha says.

She says she has friends in Delhi and Mumbai.

All those Kashmiri students studying in Delhi and other places who visited her during her long stay at AIIMS and Mumbai, she calls them her friends, her new friends. She remembers their names. This winter, she says, she would stay with them in Delhi.

"I want to see my new friends. I can feel sunlight," Insha said. "Wish I could see light anew and go to my school again."