No Glory In Unjust War On The Weak

I'll get scolded for it, I know. I've already been called every name in the Rush Limbaugh handbook: traitor, sinner, naive, liberal, peacenik, whiner... 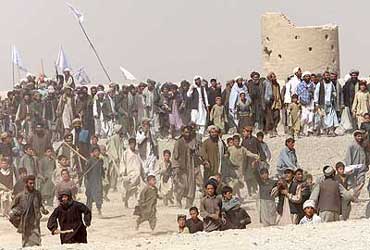 TUCSON -- I cannot find the glory in this day. When I picked up the newspaper and saw "America Strikes Back!" blazed boastfully across it in letters I swear were 10 inches tall--shouldn't they reserve at least one type size for something like, say, nuclear war?--my heart sank. We've answered one terrorist act with another, raining death on the most war-scarred, terrified populace that ever crept to a doorway and looked out.

The small plastic boxes of food we also dropped are a travesty. It is reported that these are untouched, of course--Afghanis have spent their lives learning terror of anything hurled at them from the sky. Meanwhile, the genuine food aid on which so many depended for survival has been halted by the war.

We've killed whoever was too poor or crippled to flee, plus four humanitarian aid workers who coordinated the removal of land mines from the beleaguered Afghan soil. That office is now rubble, and so is my heart.

I am going to have to keep pleading against this madness. I'll get scolded for it, I know. I've already been called every name in the Rush Limbaugh handbook: traitor, sinner, naive, liberal, peacenik, whiner. I'm told I am dangerous because I might get in the way of this holy project we've undertaken to keep dropping heavy objects from the sky until we've wiped out every last person who could potentially hate us. Some people are praying for my immortal soul, and some have offered to buy me a one-way ticket out of the country, to anywhere.

I accept these gifts with a gratitude equal in measure to the spirit of generosity in which they were offered. People threaten vaguely, "She wouldn't feel this way if her child had died in the war!" (I feel this way precisely because I can imagine that horror.) More subtle adversaries simply say I am ridiculous, a dreamer who takes a child's view of the world, imagining it can be made better than it is. The more sophisticated approach, they suggest, is to accept that we are all on a jolly road trip down the maw of catastrophe, so shut up and drive.

I fight that, I fight it as if I'm drowning. When I get to feeling I am an army of one standing out on the plain waving my ridiculous little flag of hope, I call up a friend or two. We remind ourselves in plain English that the last time we got to elect somebody, the majority of us, by a straight popular-vote count, did not ask for the guy who is currently telling us we will win this war and not be "misunderestimated." We aren't standing apart from the crowd, we are the crowd. There are millions of us, surely, who know how to look life in the eye, however awful things get, and still try to love it back.

It is not naive to propose alternatives to war. We could be the kindest nation on Earth, inside and out. I look at the bigger picture and see that many nations with fewer resources than ours have found solutions to problems that seem to baffle us. I'd like an end to corporate welfare so we could put that money into ending homelessness, as many other nations have done before us. I would like a humane health-care system organized along the lines of Canada's. I'd like the efficient public-transit system of Paris in my city, thank you. I'd like us to consume energy at the modest level that Europeans do, and then go them one better. I'd like a government that subsidizes renewable energy sources instead of forcefully patrolling the globe to protect oil gluttony. Because, make no mistake, oil gluttony is what got us into this holy war, and it's a deep tar pit. I would like us to sign the Kyoto agreement today, and reduce our fossil-fuel emissions with legislation that will ease us into safer, less gluttonous, sensibly reorganized lives. If this were the face we showed the world, and the model along with a military budget the size of Iceland's.

How can I take anything but a child's view of a war in which men are acting like children? What they're serving is not justice, it's simply vengeance. Adults bring about justice using the laws of common agreement. Uncivilized criminals are still held accountable through civilized institutions; we abolished stoning long ago. The World Court and the entire Muslim world stand ready to judge Osama bin Laden and his accessories. If we were to put a few billion dollars into food, health care and education instead of bombs, you can bet we'd win over enough friends to find out where he's hiding. And I'd like to point out, since no one else has, the Taliban is an alleged accessory, not the perpetrator--a legal point quickly cast aside in the rush to find a sovereign target to bomb.

The word "intelligence" keeps cropping up, but I feel like I'm standing on a playground where the little boys are all screaming at each other, "He started it!" and throwing rocks that keep taking out another eye, another tooth. I keep looking around for somebody's mother to come on the scene saying, "Boys! Boys! Who started it cannot possibly be the issue here. People are getting hurt."

I am somebody's mother, so I will say that now: The issue is, people are getting hurt. We need to take a moment's time out to review the monstrous waste of an endless cycle of retaliation. The biggest weapons don't win this one, guys. When there are people on Earth willing to give up their lives in hatred and use our own domestic airplanes as bombs, it's clear that we can't out-technologize them.

You can't beat cancer by killing every cell in the body--or you could, I guess, but the point would be lost. This is a war of who can hate the most. There is no limit to that escalation. It will only end when we have the guts to say it really doesn't matter who started it, and begin to try and understand, then alter the forces that generate hatred.

We have always been at war, though the citizens of the U.S. were mostly insulated from what that really felt like until Sept. 11. Then, suddenly, we began to say, "The world has changed. This is something new." If there really is something new under the sun in the way of war, some alternative to the way people have always died when heavy objects are dropped on them from above, then please, in the name of heaven, I would like to see it. I would like to see it, now.

(Barbara Kingsolver is the author of, inter alia, "The Poisonwood Bible" and "Prodigal Summer." By arrangement and courtesy, Zmag, dated October 14)