No Bed Of Rhesus

My guests have been hooted at, had obscene gestures made at them, and showered with muck. "Really," they say nervously, retreating from verandah to main house, "it's a zoo in here."

outlookindia.com
-0001-11-30T00:00:00+0553
My guests have been hooted at, had obscene gestures made at them, and showered with muck. "Really," they say nervously, retreating from verandah to main house, "it’s a zoo in here." A gibbering band of bandars celebrates our departure by doing imitations of The Who at the guitar-smashing stage. Because of the curious fence around the verandah, it feels like being in a cage: on display, harassed, hoping the bars will hold.

The first monkeys I met in Delhi were much more polite: the twice-born, the legendary rhesus macaques of North and South Block. Civil servants and ministers came and went, but there were always monkeys in the corridors of power.
It’s often said that it’s hard to tell the three apart, but that’s not true. The ones who do their raiding in bands are the civil servants, the ones who jump up and down and hoot raucously are the politicians, and the quiet guys over there, reading files and sipping tea, that’s the Bandar-log. The only real grief they caused the Government of India aside from shredded files was that, in the heart of Red Tape Land, they refused to sign attendance registers. 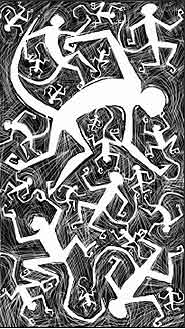 The four places where you’ll always find monkeys are at the University, near Parliament, in temples and on Bahadur Shah Zafar Marg, home to the media.

As Delhi expanded and its forests died, rhesus macaques became permanent migrants, small bands of furry exiles always on the run, displaced by yet another granite-marble colony or mall. Papers wrote of the ‘monkey menace’: the baby-biters, the homicidal ones who killed people by dropping flowerpots on their heads. No one mentioned that we’d made them homeless in the first place. The MCD caught monkeys and dropped them off at the ruined ramparts of Tughlaqabad; they came back, searching endlessly for the homes we’d taken from them. Parliament hired langurs, about the only other monkey that rhesus macaques fear, and Priti Langur and Hero Langur scared off monkey bands as official servants of the state (payment in bananas).

The band of bandars who scared my guests was terrifying at first, the bulls gnashing and barking, the mothers rampaging like thwarted vamps, even the babies baring their little teeth. We called the langur man, but his langur was on holiday—"chutti ke liye Mashobra jaati hai". So we did nothing for a few days, beyond politely asking the littlest baby not to pee through the bars.

Yesterday, they were quieter, less hostile. The bulls slumped like tired clerks and stared into the sunset. The mothers slept in tree branches, holding their babies close. When I asked them to stop thumping the bars, they obliged. The afternoon settled into peace. In the evening, a baby monkey came shyly up to the bars, and pushed a bit of fruit in at me, looking coy. I think I’m going to have to tell my landlord he has sub-tenants.