'No Alliance With Ajit Panja' 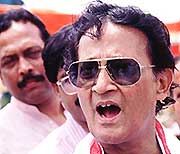 The ruling Left Front in West Bengal will not co-operate in any way with the Ajit Panja faction of the Trinamul Congress in case a split takes place against the leadership of Mamata Banerjee. In an exclusive interview to Outlookindia.com, CPI(M) state secretary Anil Biswas said that in an unprincipled party like the TMC such developments were more of a rule than an exception.

Explaining the LF stand, Biswas said  "Mr Panja and the people loyal to him are in favour of joining the BJP-led NDA government, which is the main enemy of the people. The LF"s struggle too is against the BJP and the NDA."

He also felt that the Panja-led group lacked grassroot support in the state. "Splits and factionalism are bound to afflict parties such as the TMC", he added. It was basically a non-political outfit which continued to function erratically even after its defeat. "I see no change in its style of functioning nor in the responses of its leaders to current developments."

These remarks contradict the frequent claim made by Mamata and her followers within the TMC, namely that the Panja-led group of dissidents enjoyed the tacit support of the CPI(M) and the state BJP. The TMC/Congress alliance instead of consolidating the non-Left Opposition had only caused much harm, especially in damaging a traditional party like the Congress and its image, Biswas said. On their part, neither the LF nor the CPI(M) had any reason to change their assessment of the Congress.

"Our stand on the Congress remains the same as announced during our last party congress (at Thiruvanantapuram)". The party line then was that the communal threat represented by the BJP presented a major danger to India's unity and integrity . In addition, the economic policy of a sellout to foreign interests as pursued by the NDA had further exposed its anti-people character. The LF would try to rally all democratic secular forces against the NDA and the BJP. It remained to be seen whether the Congress was willing to join this initiative, but in any case, in areas where the Left had no strength, it would support the Congress as against the BJP all over the country."

The Thiruvanantapuram line was more or less in opposition to the Left line of 1989, when the Congress was targeted as the main enemy of the people in the wake of the Bofors scandal. Biswas' comments also mean that the Left has not hardened its position against the Congress even after its alliance with the TMC in Bengal this year. "However, it remains to be seen just who remains where in case of a fresh alignment within the non-Left camp," he added.

Referring to the recent CPI observation that despite the massive Left victory there was not much public jubilation in Bengal, Biswas said "We did not organise any celebrations, instead we concentrated on the job in hand from day one." He felt the party line of patience towards the challenge of dissidents as posed by Subhas Chakravarty, Samir Putatunda and Saifuddin Choudhury, had paid off. "No one claiming to be a Leftist would find it easy to go against the established Left in political terms, Biswas said.

"Prior to the elections we were under enormous pressure to take drastic action against the dissidents, but events proved us correct. We do not think imposing inner party discipline was ever a problem, as 90% of our members are disciplined.

Biswas refused to comment on the recent arrest of 16 anti-socials from Salt Lake and their alleged familiarity with Chakravarty, still a Minister in Bengal. "Such matters were for the police to sort out," he said. However, the two-day state committee meeting beginning today was certain to discuss the matter at some length, say observers.