Nizamuddin: Rising In The East

Nizamuddin East bustles not with malls or multiplex cinemas but with a lively sense of life since most of the oldies have been replaced by the young, who have added zing to the colony. 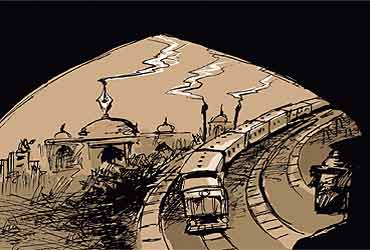 Nizamuddin East prides itself on being ‘in’ compared to Nizamuddin West. It was once a sleepy hollow with retired refugees and other old people. It had a railway station as sleepy, with two trains stopping by for four minutes each on their northward journey from Bombay. Now it is neighbour to an expanded rail junction with trains bellowing 24 hours a day, week after week, through the year. Attempts to quarantine them have failed but the residents have sequestered themselves with a Berlin Wall so far unbreached.

In consequence Nizamuddin East bustles not with malls or multiplex cinemas but with a lively sense of life since most of the oldies have been replaced by the young, who have added zing to the colony.

And then some distinguished citizens have moved in to the area. There is Sir Mark Tully, who is a fleeting presence but adds lustre to the place (why did we have to make the Brits quit?). So also the far-famed but close-at-hand artist, our own Anjolie Ela Menon, estimable editors (man and dog) and others of note, notable, noted, notorious—too many to note without being invidious—honest, solid senior citizens.

Nizamuddin East, of course, lies cheek by jowl with the luminous Humayun’s Tomb, Khan-e-Khana’s tomb, Bu Halima’s tomb (who Halima?) and other equally magnificent tombs of lesser mortals that make for walks or for contemplation sitting on benches made by some sadistic designer. But the parks are lovely even if kept by errant malis who cannot distinguish between the bad and the beautiful, junk and jewel.

And so, sometime ago, I met a girl in my favourite park. Actually I saw her peering at an empty bottle, an ordinary plastic water bottle.

"Why are you looking at that water bottle so intently, as though it might suddenly jump up? It’s been there for a long time," I said. "That’s precisely the reason," she said without looking up at me. "Been there for nearly six months, I’m sure. Not moved an inch," she observed.

I said, "Plastic bottles left undisturbed don’t show signs of life, even if prodded." Straightening up and looking at me for the first time, the girl said, "Maybe the gardeners have left it to become a fossil of the future."

I said, "Becoming a fossil will take at least ten thousand years. You know, plastic does not degrade so easily." Sadly she said, "That’s the pity. I shall not see it then." "Well," I said, "even if you were there, you too would be a fossil and not so lovely as you are now." Looking even sadder she said, "Dust is my destiny" and was gone. I never saw her again.

That’s Nizamuddin East as well. Interesting people—I could tell you more about them.