'Nitish Kumar Is Corrupt And Criminal'

The Expelled Samata Party MP is very annoyed with Railway Minister Nitish Kumar. Speaking to Outlook Saptahik, he claims Nitish is corrupt, has mafia connections and should be in jail. Excerpts. 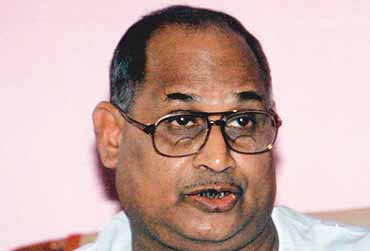 In your letter to the Prime Minister, you have accused Nitish Kumar of corruption and that he has connections with  Mafia dons of UP and Bihar. What evidence do you have?

I have written three letters to the Prime Minister. Nitish Kumar is corrupt and criminal. I have already proved that. Even children in Bihar know  he has awarded railway contracts to mafia dons. As far as other cases of corruption are concerned, the day the Prime Minister orders an inquiry, Nitish Kumar will be in jail.

You are levelling charges against Nitish because you have personal enmity with him. If the charges are so serious, why is the Prime Minister not ordering an inquiry?

This is because in the present phase of political contamination, degraded people like Nitish Kumar have been successful in political blackmail. As far as the charges against him are concerned, let me make it clear that I am doing it for the country's good. Petty people like Nitish are occupying important positions in  national politics and are demolishing constitutional and administrative structures. I have no personal enmity. But it is true that due to a personal grudge he blocked the proposal for a bridge in my parliamentary constituency. I have evidence against him that could send him to prison just by filing an FIR, even without an inquiry.

What evidence have you got that can send Nitish Kumar to prison?

Let me tell you of a rule according to which, before getting an approval for a new railway line, there must be a sanction for it in the budget. First the Planning Commission must approve, and then the Cabinet’s approval must be taken. Flouting all rules and procedures, Nitish fraudulently allotted Rs 470 crore to be spent right away for material modification. This is an outright crime. He will go straight to prison. But sadly, there is no one to listen to our grievances.

You wrote three letters to the Prime Minister, but nothing happened. You got expelled from the party. What are you planning now ?

Not to worry, there is full preparation. We will raise the matter in the next session of Parliament. There are other cases of corruption in the Railway Ministry. The last option will be the court. Our  goal is to send Nitish to prison, because people like him do not deserve a place at any level of politics, leave alone national politics. His right place is behind bars.

'The Arrival Of Dogmatism Saw The Departure Of Development'