Some argue that Kashmiri separatist leader Syed Ali Geelani, at the fag end of his life, has foreclosed any option of compromise or dialogue and passed the baton to youth and asked them to stand for 'whatever ideology he stood for over the years'. 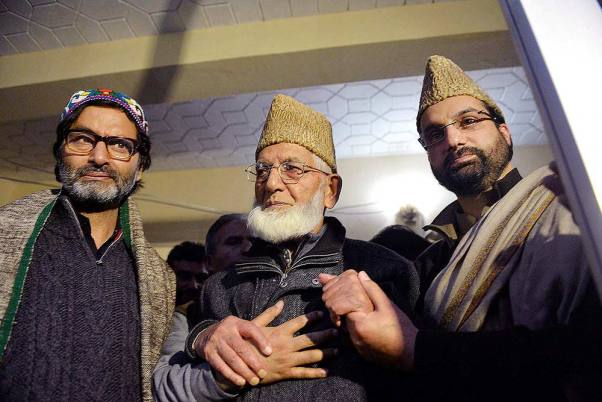 Kashmiri Separatist leader Syed Ali Shah Geelani’s resignation has stoked a debate in the Valley about its possible implications on the politics of the region and, specifically, on the separatist movement. Since August 5, 2019, when Article 370 and Article 35-A were nullified and Jammu and Kashmir was bifurcated into two Union Territories -- J&K and Ladakh -- the Hurriyat Conference and other separatist groups had disappeared from the scene as large number of their members had taken been arrested, detained while others preferred to remain silent. Even after the lockdown in the Valley began to ease, the separatist groups for a long time refrained from issuing statements also.

Now Geelani’s resignation has brought back discourse to separatists again.

Many argue Geelani, who is 90-year-old and ailing, wants to be remembered as a Kashmiri leader and not as a separatist leader. A mainstream politician who remained in jail after Article 370 was removed, says that by resigning from the Hurriyat Conference and levelling allegations of embezzlement against his own colleagues, Geelani has “carpet bombed” them and thus isolated himself as the one who has not “compromised” on anything over the years. This way, he argues, Geelani, at the fag end of his life, has foreclosed any option of compromise or dialogue and literary passed the baton to youth and asked them to stand for “whatever ideology he stood for over the years”. He argues an era of intermediaries has gone with this resignation and Geelani, through his resignation, would want to inspire youth for his “uncompromising ideology, whatever that is.”

Since its formation in the 1990s, the Hurriyat Conference has attained a unique position for itself with the Prime Ministers ranging from Atal Bihari Vajpayee to Manmohan Singh and Pakistani leaders from Nawaz Sharief to General Pervez Musharraf holding talks with them. Over the years, Kashmir interlocutors appointed by New Delhi would hold prolonged talks with the Hurriyat Conference -- be it former Governor N N Vohra or Dileep Padgaonkar-led interlocutors group. Geelani all along, however, opposed dialogue with the government of India unless it agrees to what he would say, “disputed status of Jammu and Kashmir.” Geelani bifurcated the Hurriyat Conference in the 2003 after Delhi initiated dialogue process with Mirwaiz Umar Farooq and other leaders and the then deputy Prime Minister L K Advani held talks with Mirwaiz-led Hurriyat.

Ireland-based Kashmiri scholar Tahir Firaz wrote on Facebook that some people are asking why Geelani resigned from All Parties Hurriyat Conference. “Those who can read Urdu, this paragraph from the resignation letter gives the answer. Essentially, Geelani is saying that he tried hard to reach those Hurriyat leaders who were not jailed but all in vain. He says that they didn't fulfil their responsibilities after the abrogation of 370, to guide people and take necessary steps to counter Palestinization of Kashmir. They should have led the (Kashmiri) nation at the time of great crisis but they shirked their responsibility,” he argues.

As Geelani’s resignation has led to feverish social media commentary on the issue, people argue that the Hurriyat Conference and separatist couldn’t do anything after August 5, 2019 and now Geelani, by his resignation, is trying to “absolve himself.” In all this, separatists are back in the political discourse in the valley.

Amid all the analyses, commentary and interpretations, Geelani’s granddaughter tweeted: “One cannot resign from an ideology, a political stand, belief and faith.”