'A message must emanate from us that we are united in our desire to fight and eliminate the scourge of terrorism. We cannot allow the forces of intolerance and extremism to distract the world's attention from the vital concerns of our people – the pr 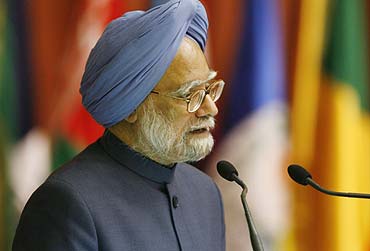 Full text of the statement by the PM at the XIV NAM Summit:

I would like to congratulate Cuba on its assumption of the Chair of NAM. We wish President Fidel Castro a speedy recovery, good health and a long life.

We would also like to compliment Prime Minister Badawi for his skilful stewardship of our movement.

Mr. Chairman, our beloved Prime Minister, Jawaharlal Nehru, one of the architects of this Movement, said, "Non-alignment is freedom of action which is a part of independence." He wanted us to judge issues "in full freedom and without any pre-conceived partisan bias." This vision must continue to shape our perspectives in the years ahead.

Mr. Chairman, we live in an increasingly interdependent world. The challenge ahead is to promote a balanced and equitable management of this interdependence of nations. As globalization progresses, national and regional boundaries are becoming less and less relevant. Our problems are global, so must our solutions be.

The United Nations played a creative and a critical leadership role in shaping the international agenda in the past. It has to do so again. Reforming the UN and revitalizing the UN General Assembly is a pressing imperative. The developing world must find its due representation among the permanent members of the UN Security Council. We must join hands with other like minded countries to promote democratization of processes of global governance, ushering in a new global polity, based on the rule of law, reason and equity.

We, the members of the Non-Aligned Movement constitute more than half of the membership of the United Nations. Our collective strength is unmatched, and we must now unite behind a common and a fundamentally new vision of "inclusive globalization".

In economic affairs, the biblical saying "to him that hath shall be given" has wide applicability. Globalisation must be accompanied by a more balanced and equitable distribution of its benefits. Otherwise the global response to challenges will remain uneven and partial at best.

As non-aligned countries, we led the struggle against attempts to divide the world into ideologically irreconciliable blocs. We espoused peaceful co-existence and the higher cause of humanity beyond racial divisions. Today, we again confront the danger of the world being split along an artificially created cultural and religious divide.

The Non-Aligned Movement, encompassing as it does, every religion professed by mankind, every ethnic group and ideological persuasion, is uniquely placed today, once again, to play the role of a bridge of understanding. Our cooperative world view is in itself a rejection of the notion of a "clash of civilizations". Rather, our message to the world should be that it is possible to work for a "confluence of civilizations".

If NAM is to be relevant in today's circumstances, it cannot afford to equivocate on the subject of terrorism. A message must emanate from us that we are united in our desire to fight and eliminate the scourge of terrorism. We cannot allow the forces of intolerance and extremism to distract the world's attention from the vital concerns of our people – the problems of poverty, ignorance and disease.

Mr. Chairman, the emerging fault lines of the new ideological divide are nowhere more apparent today than in West Asia. We have just been witness to a tragic and pointless war in Lebanon. It has only sharpened the sense of alienation and resentment, brutalizing a country that had just begun to reclaim its heritage of inter-ethnic and inter-religious harmony after years of conflict.

I would recommend that we constitute a suitable high level group for West Asia. The group could undertake a sustained mission to promote understanding in the region and assist in the implementation of the agreed roadmap towards a comprehensive peace. The international community must address more fully its responsibility to resolve this issue and bring to an end once and for all the long years of suffering of the Palestinian people.

In 1988 Prime Minister Rajiv Gandhi had presented to the UN General Assembly a detailed and credible Action Plan for Nuclear Disarmament. I believe the time has come for NAM to once again assume an active and leading role in advocating nuclear disarmament. India has prepared a Working Paper on Nuclear Disarmament which will be circulated as a document at the UNGA Session this year. We would invite fellow members of NAM to join us in our efforts to achieve universal nuclear disarmament and a world free of all nuclear weapons.

Mr. Chairman, at the First World Summit on the Environment, Prime Minister Indira Gandhi declared, "there is no first, second or third world; we are all part of One World". The Non-Aligned Movement should take the lead in articulating a "new paradigm of energy security", that addresses the needs of all peoples and of our planet.

Mr. Chairman, African countries form the largest single grouping in NAM as well as in the U.N.G.A. The future of our planet is inextricably linked to the destiny of Africa. I believe this is an opportune time for us to take a major NAM initiative on Africa.

The NAM initiative would focus on human resource and agricultural development. It would involve setting up of a mechanism, in cooperation with the African Union, to pool our assets for investment in the future of Africa. We would be prepared to work together with other interested NAM countries on elaborating the NAM Initiative on Africa.

Mr. Chairman, if we wish to revitalize the Non-Aligned Movement the collective message of our Summit must be seen as being central to the success of global efforts to deal with urgent transnational issues – be it terrorism, pandemics, energy security or the environment. As a group we have rejected extremes. We must spread the message of Gandhiji, the apostle of peace. Our voice must then be one of moderation, harmony and reason. If such is the voice of more than half of the people of the world, it will prevail. And, it will guide the destiny of our planet.

On A Wheel Of Fire