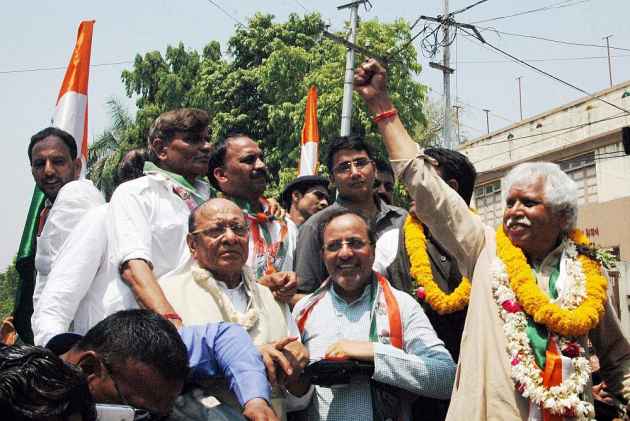 The Gujarat elections are over. And so the waiting game has begun. Most people believe the results are a foregone conclusion. Yet politics can be unpredictable. So psephologists are enjoying their spot in the sun. Even in predictable Vadodara. Yet, there's always the 'What If' factor. Baroda is considered Modi's assured seat. However, his key opponent, an unknown though brave face, behaves like it's far from over.

Every Indian now recognizes Arvind Kejriwal, the AAP hero, fighting Narendra Modi in Varanasi. But how many have heard of Madhusudan Mistry, the Congress party's man in Baroda? 'Fighting Modi in Baroda? Is the man suicidal?” was the common reaction. But, a week before polling, Mistry was unfazed. “It's no big deal,” he said. “Why such a big fuss?"

Intrigued, I decide to interview Mistry, the man who dared to tackle the face that launched a million hoardings in every nook and corner of India. I've never had anything to do with politics before, so the entire experience is riveting.

I'd known Mistry in his previous avatar, over 20 years ago, as an organiser of Tendu leaf workers, fighting for minimum wages, with forest based people and Adivasis. Mistry, the politician, is an unknown entity though he appeared in Bangalore newspapers as the man who got Karnataka back for the Congress. I begin with “Everyone's talking about how you must be the only person in the party ready to commit political hara-kiri! We salaam your courage.” He laughs. ”Why is everyone so scared of Modi? He's just a lot of hot air, you know.”

'Okay', I counter, 'Said like a neta, but what made you decide to take him on?'

“I'm fighting Modi because I want to expose his claims about the Gujarat model. By buying full page ads, TV space and creating hype, he is trying to get the top job in the country. It would be difficult to forgive myself if I didn't fight him. After all I'm Gujarati and I have worked for my people for decades. For real development. In the last few years Modi has managed to suppress all opposition. All dissenters. He's created a culture of fear in Gujarat. I want to expose all this. Expose his lies.”

Madhusudan Mistry is the antithesis of Modi. I had expected his years in the corridors of power, especially as a member of the Congress Working Committee, would have changed the man, with the trappings of power on obvious display. But I was pleasantly surprised to find that the Mistry who worked for the rights of Adivasis was not very different from Mistry the politician.

He is 69 years old, but looks younger despite the white hair framing his face. A pleasant, kind face. He is obviously exhausted by the gruelling election trail but reclines on a simple Baba Amte type bed, recuperating. No luxury, no pampering, no air conditioning in spite of 40 degrees Baroda heat. Nothing five-star or fancy about the room or the man. This is definitely Gandhian. A spartan, lower middle-class sort of room.

It's almost ludicrous , when you consider the odds he is up against. Clichéd David and Goliath. The contrasting styles scream at you. He exasperates his team. “He won't allow us to take pictures,” daughter Paulomee explains when I say high resolution photos are necessary for publication. "We had to sneak up and photograph him."

Mistry listens to the diatribe with a flicker of impatience. 'Do you think the villagers care about your Facebook or campaign ads?” he asks in a tired voice. “I am not Narendra Modi. I will not spend thousands of crores for national TV spots or full page newspaper ads. People should ask where these thousands of crores are coming from. And instead of spending it on his face, why doesn't he spend it for the poor of Gujarat?” Touche.

The rhetoric is impressive, as is the man. In a subdued, dignified way. Is he as confident as his unruffled exterior suggests. What kind of votes will he bring in?
“I have faith in the masses. India's poor are not fools,” he pronounces, as solemnly as a judge. Mistry is no fool either. He first contested a 2001 by-election for the Sabarkantha Lok Sabha seat and defeated BJP candidate Upendra Trivedi by over 20,000 votes. He won again in the 2004 Lok Sabha elections. Then lost in 2009 to a BJP rival. A trusted aide of Rahul Gandhi, the leadership's faith in him was vindicated when he was instrumental in winning the Karnataka and Kerala state polls, though his strategy did not succeed in Madhya Pradesh.

If you are surrounded by Congress acolytes, its difficult to gauge the rest of Baroda's reaction or mood. Dr Ganesh Devy, Padma Shri, internationally famous linguist and author of several brilliant books, is not a Congress fan. “Baroda turned into a respectable fight because of Mistry's entry into the fray. Otherwise it was considered already Modi's. Everyone here knows Mistry is a decent, good man. He is respected. I'm not saying Mistry will win. But he's scared Modi. Brought him running to Baroda yesterday. Mistry will definitely get the votes of secular people who are angry about what is happening here in Gujarat. But any votes Mistry brings in is no thanks to the Congress party.”

I have never been on an election campaign before. So curiosity piqued, I decide to follow Mistry on his whistle-stop election trail for a day.

Our first stop is on the Vadodara-Godhra highway. A simple shamiana. The heat doesn't deter the crowd. Mistry the politician emerges— a complete transformation. He carries the crowd of Congress workers with him. 'Are we going to win? Of course we are. Yes or no?'

He picks out individuals and asks them questions. They answer. People laugh, clap. They nod agreement. This is a band of tough women, obviously devoted loyalists.

Shobha Ojha, All India Mahila Congress President from Indore speaks. She begins, “People are frustrated with this Gujarat model hype. Do you see the much touted wealth locally?" Crowd cries, 'No!' Encouraged, Shobha thunders, “Local people have faced BJP goondaism. The rich become richer. Poor remain poor. Health and unemployment are key issues. Especially women and children's health. People are fed up. Whatever happened in Gujarat happened because of the hard work of Gujaratis. Not because of Modi.”

She ends with the Congress trump card. “On one side we have our Gandhian Madhusudan Mistry and on the other, in this land of Gandhi, the followers of Godse.”

Back to the dingy Congress office which looks exactly like it must have done 50 years ago. Dusty, shabby, unimpressive. Three Keralite supporters arrive to greet Kerala Congress leader V.M.Sudheeran described online as a maverick leader known for his idealism. Sudheeran has come all the way from Kerala, in spite of recent surgery, to express solidarity with Mistry. He exhorts the gathering of Gujarat-based Malayalis to vote for 'the clean, good man.'

This brings about an interesting exchange. 'Mistry's bhaagyam (good fortune) is that no one can throw stones at him easily,' a supporter muses. 'He cannot be brought down as he has no interest in the three Ws—wine, women or wealth.' Someone laughs, 'That's not bhaagyam that's 'gunam,' his own virtue.'

Another voice differs: 'But that's Modi's claim to deserving the PM's chair. He is a sanyasin with no family, no vices.'

A cynic objects. “A Sanyasin who wears designer kurtas, uses expensive computers and gadgets, and spends thousands of crores on putting his face on TV, newspapers, magazines and hoardings? Who wouldn't like to be a sanyasin like that? Modi flies in millionaires' planes and helicopters and must come back to sleep in his own bed every night. Expense no problem. Hah! Sanyasin?”

There is loud laughter. This is definitely the Congress Camp.

We reach the old city. Mistry's crowds are small but committed. About a thousand women are present. He begins, “It's wonderful to see so many women. Rajiv Gandhi would have been happy. He wanted women's progress. When Modi filed his nomination, he said 'I dont have to come to Baroda to campaign. Baroda is mine'. Today I challenge the BJP. We will see whose Baroda this is'.

Mistry shouts into the mike, “Modi asks: 'Congress ne 60 saal mein kya kiya?' When I was a child, women carried water on their heads from 50 feet deep wells. We walked 5 kilometres to school. We studied by kerosene lamps. Congress has brought Gujarat electricity, education and water. BJP claims they did all this. Congress electrified Gujarat. Only 170 villages had no electricity when Modi became CM. Yet he claims credit for everything.'

He continues, “Congress gave India her Constitution, her freedom from the British. Voting rights. Congressmen and women went to jail for India's freedom. I challenge Modi to come to Baroda and debate with me. I will expose his lies”.

The women clap and respond to the rhetorical questions. 'Women of Baroda answer me!' he yells. And they do. In this tiny pocket, there is definitely a Mistry wave!

We arrive at Daboi road. Yet another stop on the campaign trail.

The crowd is mixed. Dalits, Muslims, generally poorer people. Mistry gets a rousing welcome. The warmth is unmistakable.

He starts immediately. “Our Maharaja built us this beautiful Baroda. He educated us, looked after the poor. History books called him an enlightened ruler. He made Ambedkarji his advisor before Independence. Yet Modi says nothing happened in Gujarat till he became CM. Modi did everything for Baroda”. The crowd, as if on cue, guffaws. People clap.

“What has Modi brought to Baroda? Computers? And his photographs on huge hoardings all over Gujarat”. He flings his arms out to embrace the crowd. Mistry is on a definite roll. “Rajiv Gandhi gave women a place in Gujarat. He passed laws which made women sarpanches, corporators. He gave Gujarat to you to rule. He gave you equality. He gave you rights. Who gave Modi the school he studied in? Congress. Modi studied in the school which Congress built. Do you remember the days before Modi, when there was one soap and one tel (oil)? We washed our clothes and our faces and bodies and hair with that one soap. Modi brought huge supermarkets with hundreds of shampoos and washing machine powder. Development. But do you enter these 'Modi' shops? These huge Malls? No. Modi's Gujarat is for the rich. Not for you”.

“Indira Gandhi died for this country. Rajiv Gandhi too. They loved India. What has BJP done for you? What have they suffered? Nathi, nathi, nathi (Nothing, nothing, nothing)”.

He continues, “Modi takes poor peoples' lands and gives it to big companies. Builds super highways for them. And boasts to the wealthy. They think you are fools. That his 20 feet hoardings and TV ads will sway you but I know that you will not be swayed”.

'Bol mere sathi, Halla bol”. It's a war cry the unions use. The crowd loves it. They scream. “Halla bol!'

“Louder,” he exhorts. They oblige. Laughing, flinging his arms out theatrically. The message is clear. Mistry is of the people. By the people.

But did the people vote for Mistry or Modi? Mid May will tell us.