Society Muslims Must Say No To AMU Reservations

Muslims Must Say No To AMU Reservations

Already, Muslims on the streets have paid a heavy price for their blind reliance on their leaders. There is an urgent need that Muslims must discard much which goes in the name of Muslim politics. 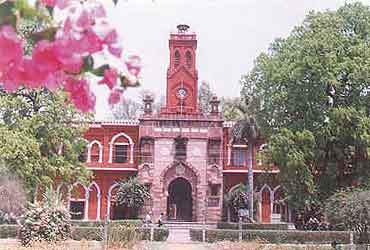 As if the decision to reserve 50% of seats to Muslims was not shameful enough, a large section of the Aligarh Muslim University (AMU) academic community now wants to hit the streets against the recent Allahabad High Court order which legally nullified such a move by the university.

While the legal veracity of the judgment continues to be debated, it is important to point out that the reasons which the AMU authorities have been giving for 50% Muslim reservation are themselves dubious. In the earlier arrangement, 50% seats were reserved for what was called ‘internal students’ while the remaining 50% were open to all irrespective of region or religion. The new measure adopted by the university tampered with this old formula and reserved 50% of the seats exclusively for Muslim students and 20% for its internal students.

Now, it is well known that most of the internal candidates are Muslim, which effectively brings total reserved seats to a whopping 70%. This clearly becomes illegal according to the Supreme Court judgment which prohibits more than 50% reservation. More importantly, the theoretically secular character of the institution gets tarnished once and for all. For while it is true that the campus population was predominantly Muslim, yet there was no religious discrimination of students in admission. AMU, a central university, which is already notorious for not implementing the SC ST quota, is going all out to attach a communal tag to itself.

There are two related reasons which the university authorities are giving in support of Muslim reservation. Firstly they argue that the move will attract students from all parts of the country which is currently skewed in favour of north Indians. Secondly, they argue, that it will raise the academic standards of the university since they would be able to attract the best talents, especially from among the Muslim candidates.

Both the arguments are bogus.

It must be kept in mind that the reservation clause is selective. 50% Muslim reservation applies only to 38 select professional departments, the combined strength of which comes to nearly 2000 students only. Now it is illogical to argue that in a campus strength of about 30,000 students, a mere 2000 will radically alter its regional profile and make it more representative. Right from its inception, AMU has always been a north Indian affair. Syed Ahmad Khan founded it for the education of north Indian Muslim nobles who had fallen on hard times. Moreover, a large number of Muslims come from this part of the country and there is no reason why they should not form the majority in an institution like AMU.

The argument that 50% reservation will raise the academic standards of the university is a classic example of shifting responsibility on others, which, over the years, has become symptomatic of Muslim politics in India. Rather than looking inwards and standardising the recruitment of teachers, the university conveniently shifts the blame on the students for its falling academic standards. It seems that the authorities have realized that the university has become so rotten from inside that the only way to give it a veneer of central university is to attract good students from outside. But that is precisely the problem. Why should students study in a university which has such low academic standards? Excellence in education is the result of continuous internal academic reform and expanding expression of divergent opinions, both of which the AMU has in short supply. And till the time this is not rectified, AMU will never attract the best of talents.

For quite some time now, the Indian Muslim elite have been raising the bogey of Muslim reservation. AMU’s quest for reservation should be seen against this background of a general consensus which is building up among the Muslims that reservation is the panacea for all its ills. While it is true that Muslims are lagging far behind in education and employment, it is also equally true that reservations will further complicate their problems.

Muslims are not a homogenous community. As in any other community, there are deep divisions of caste and class among the Muslims. For such a community, where a large section is poor, the benefits of reservations will only accrue to a select section of upper class Muslims. Since the AMU is not even discussing the exclusion of creamy layer Muslims from the ambit of reservations, one suspects that the prime beneficiaries of such a move will be those Muslims who are historically and morally in no need of it. In such a scenario, then, there is not much of a benefit for poor and backward Muslims in whose names the politics of reservation is being carried out.

The political fall out of such a move will also be detrimental to the Muslim community. Out of power and out of issue, the BJP has grabbed the opportunity to breathe life into itself. If the BJP exploits the issue, as it did after Shah Bano, the blame for this would squarely lie on the shoulders of this myopic, parasitic Muslim elite. Ordinary Muslims should question not only the wisdom with which the AMU sought to reserve seats but the whole politics of reservation which is going in their name.

Already, Muslims on the streets have paid a heavy price for their blind reliance on their leaders. Instead of progress, it has brought more madrasas in place of schools, economic backwardness and much more insecurity. There is an urgent need that Muslims must discard much which goes in the name of Muslim politics. As a first corrective step, they should say a big no to Muslim reservation in AMU.