Musharraf's Many Moves Of Make-Believe

As the surviving myths about Musharraf and Pakistan are slowly shattered in US and Europe, sending Pakistan into a tizzy, India seems strangely reluctant to wield its weapons. But is a desperate general getting trapped in his labyrinth? 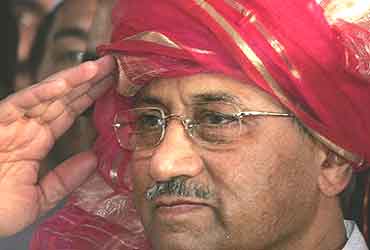 The general is getting trapped in his labyrinth. Pervez Musharraf’s habit of announcing peace initiatives to grab headlines while managing the terror-Taliban network is no longer sustainable as credible foreign policy. It is becoming all too obvious that the general makes offers, as the one recently, to withdraw his claim on Kashmir in exchange for self-governance by India largely for effect and to maintain a façade. Otherwise why would his army of intelligence operatives and diplomats be working frantically to strengthen that very claim on Kashmir in key western capitals?

Interestingly, Musharraf does his most creative peace-making on television, not in meeting rooms where deals are actually made and signed. Television diplomacy keeps up the image of a reluctant military dictator dancing precariously above the deep depths of jihadism while holding together his dangerous country with "enlightened moderation." But in reality the general presides over the same old think on Kashmir that his military predecessors devised in the early years.

Those in doubt may visit Brussels where Pakistan is engaged in an all-out war over its claim on Kashmir – all because of a 10-page report, which negates every myth Pakistan has painstakingly created about Kashmir over the decades. Prime Minister Shaukat Aziz is coming all the way to testify in front of an EU committee. It is both a sign of desperation and of insecurity. But given Pakistan’s limited foreign policy tablet, the loss of Kashmir as a weapon would be serious.

The report was prepared by Baroness Emma Nicholson, a British member of European Parliament or MEP, after visits to both sides of the border last year. The baroness has dared to go beyond the usually accepted storyline of how India is mostly to blame for the status quo while Pakistan cares about the plight of the Kashmiri people. She declared calls for a plebiscite "out of step with the needs of the local people" besides issuing a strong indictment of Pakistani society as undemocratic, which respects neither women nor gays and where literacy and healthcare are distant goals.

The baroness is the first western official to do away with the pretence that Musharraf is a democrat disguised as a dictator. Her sharp assessment is a welcome change from the usual tiresome western analysis, which seems almost afraid to deviate from the established pro-Pakistan narrative. The report is the first blunt assessment of the Kashmir situation – India can’t demilitarize unless terrorism stops. And it is not that Nicholson takes India’s view – she criticizes Indian army for human rights violations and points out other problems. It is just that she is refreshingly honest about Pakistan. Given the grim situation in Pakistan’s border areas, the rebirth of Taliban in Quetta and the attacks inside Afghanistan, it is time to move away from the fiction that Musharraf is doing his bit. The report does just that.

Not surprisingly Islamabad has vowed to kill the report by whatever means necessary. The European Parliament will vote by February-end and until then battles will be waged for every word and every comma. Brussels will remain a hub of Pakistani lobbyists and ISI operatives. Already pro-Pakistan MEPs such as UK’s Sajjad Karim have flooded the committee with amendments – a high 61 by him alone. A whopping 450 amendments, said to be the highest ever on any foreign policy report, are on the table, essentially watering down the report and if adopted would render it meaningless mash.

The ISI fingerprints seem to be all over this campaign. According to an article in Pakistan Observer, the ISI is masterminding the entire amendment campaign, helpfully providing both language to willing MEPs and funds to Kashmiri front organizations. The theoretical support is reportedly coming from the Institute of Strategic Studies in Islamabad, a think tank for the Pakistani military establishment.

The heat from Pakistan is so high that a Hungarian MEP complained openly in the session I attended about the "pressure" from Pakistani groups to vote for the amendments. The crude and rude games of domestic British politics have invaded the halls of EU parliament. British Labor Party, supposedly a friend of India, is speaking with both ends of its mouth. While its future prime minister Gordon Brown made his first trip to India professing love and friendship, Labor MPs and MEPs have decided that killing the Kashmir report could be a way to win back Muslim voters in Britian who have deserted Labour for the Liberal Democrats in large numbers. Baroness Nicholson is a Lib Dem and Labour MEPs have turned so vicious that they have asked her to be "removed" from her position.

Pakistani operatives are sending a clear message in Britain – either you are with us or against us on Kashmir. A vote in Brussels could cost you in the next election in UK is the open threat.

So what is India’s strategy against Musharraf’s many moving pieces? Fight back but no need to demean yourself by sending a prime minister to "testify" in front of a committee. Various Indian missions in Europe have been instructed to do "the needful" but India’s needful is not on the same war-footing as Pakistan’s. It seems even when India is handed something on a platter, it feels guilty about wielding it as a weapon. Watch Musharraf wield his – both imaginary and real.